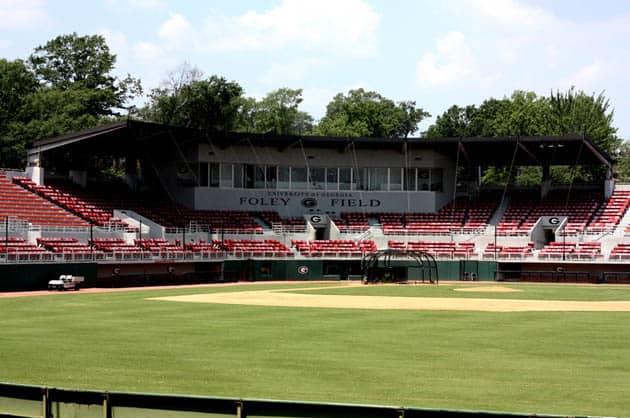 ATHENS, Ga. – The Georgia Bulldogs completed a weekend sweep over the Binghamton Bearcats with a 9-2 victory Sunday in front of a Foley Field crowd of 1,908.

The Bulldogs (5-6) scored three runs in each of the first two innings, and added another in the third to jump out to an early 7-0 lead that proved insurmountable for the Bearcats (3-7).

Starter Patrick Boling (1-1) earned his first victory of the season pitching a career-high seven shutout innings for the Bulldogs, allowing six hits while striking out three. David Gonzalez and Connor Jones each pitched one inning to finish off the game for the Georgia pitching staff.

“That’s what we needed, a quality start from Pat, and I was encouraged by all our starting pitching this weekend,” said Georgia coach Scott Stricklin. “It was 6-0 after two innings so he was able to relax. I thought his last two innings were his best. He’s a senior, and he showed a lot of poise. Binghamton hit some balls hard, but we made some nice plays in the field.”

Georgia wasted little time getting on the board first, scoring three runs in the bottom of the first inning. With one out, Conor Welton singled up the middle to get the offense going. Binghamton starter Casey Wenzel then hit Hunter Cole and walked Jared Walsh to load the bases.

Wenzel then hit his second batter of the inning, Zack Bowers, and issued two consecutive walks to bring in the first three runs of the ball game before being pulled and replaced by Greg Ostner. Despite inheriting the bases loaded with just one out, Ostner was able to get the Bearcats out of the inning without surrendering any more damage.

Nelson Ward lead off the top of the second inning with his third double of the weekend, narrowly missing his second home run of the season as the ball bounced off the right field wall. Ward then recorded his fourth stolen base of the season as he swiped third.

After Cole was hit for the second time in as many innings, Walsh hit what appeared to be a potential inning-ending double play ball, but Binghamton second baseman Daniel Nevares couldn’t field the ball cleanly, allowing Ward to score and Cole to advance to third. Cole then scored on a sacrifice fly by Bowers in the next at-bat.

Back-to-back two out singles by Daniel Nichols and Brandon Stephens allowed Walsh to score as Stephens notched his first RBI of the year, extending the Bulldogs’ lead to 6-0 after two innings.

Binghamton threatened to cut into Georgia’s lead in the top of the third, loading the bases with one out after back-to-back singles by John Howell and Nick Pancerella started the inning. Boling was able to force Bill Bereszniewicz to ground into an inning-ending 1-6-4-3 double play to get the Bulldogs out of the inning unscathed. It was one of nine double plays turned by Georgia in the series.

Georgia extended their lead to 7-0 in the bottom of the third as Stephen Wrenn lead off the inning with his first career double, and then later scored on a double play that Cole grounded into with the bases loaded.

The Bulldogs added another run in the bottom of the seventh, as Wrenn hit his second double of the day. This one brought in Jess Posey who scored from first after drawing a leadoff walk. Wrenn later scored on a Heath Holder groundout, pushing Georgia’s lead to 9-0.

Binghamton finally got on the board in the top of the eighth inning, as Jake Thomas lined a two-run double down the first base line off of Gonzalez, scoring Breszniewicz and Nevares to make it a 9-2 ball game. Also worth noting, Wrenn made another spectacular diving catch in centerfield, his second web gem-worthy play of the week.

Georgia will return to action on Tuesday, March 4 when rival Georgia Tech comes to Athens. First pitch is slated for 7:05 p.m. at Foley Field, and the game will be televised by CSS.