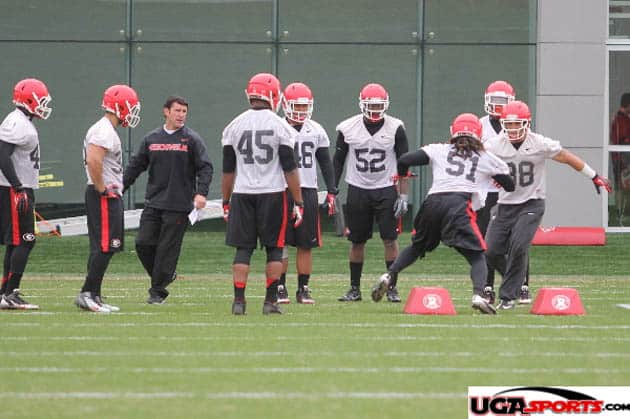 ATHENS, Ga. – Georgia’s football team opened its spring practice with a two-hour workout on Tuesday with clearing skies and temperatures in the low-50s.

This was the first practice with the Bulldogs’ four new defensive coaches, led by defensive coordinator Jeremy Pruitt, and the team’s sole early enrollee, quarterback Jacob Park. According to head coach Mark Richt, he was pleased with the work his program accomplished on day one.

“I thought it was an outstanding day,” said Richt. “We changed some things around on how we practiced with the goal of getting more reps in less total time. Our guys were flying around with a lot of energy today. We were concentrating on conditioning more during practice than after and I was impressed everyone, especially the guys on defense, were getting lined up so quickly for this being the first day.”

Monday marked the first of 15 sessions the Bulldogs will go through during their spring practice. The annual G-Day game is scheduled for Saturday, April 12 at 1 p.m. and there is a pair of practices scheduled the week after the spring game.

While Saturday mornings have been usual spring practice times in the past, winter weather in Athens earlier in the spring semester has altered that schedule this year. Following Thursday’s practice, Georgia will have an afternoon session on Saturday and then another afternoon practice the next Saturday since March 22 and 29 are slated as make-up days for the University.

Following his recap on the first day, Richt also addressed the four players who were arrested on Monday.

“Guys aren’t going to be perfect and when they do something that needs discipline, we are going to follow through on it,” said Richt. “We always try to educate our players and discipline them appropriately. Similar to when you are dealing with your kids, some of them learn things by watching and some of them learn lessons by doing. We stick with the goal of punishing, educating and loving all that come through here.”

With Pruitt, Mike Ekeler, Tracy Rocker and Kevin Sherrer joining the staff, Richt thought Monday’s practice was a refreshing one.

“We were focusing on the excitement of spring ball today and it was a close feeling to those first practices in 2001 when I started, brand new stuff being introduced and an energized feeling,” Richt said.

While Richt mentioned that Gurley practiced and “made it through the whole day” but is “not sure of his limitations this spring,” he also said running back Keith Marshall, tight end Jay Rome and receiver Justin Scott-Wesley were the only players who were unable to do any drills during the first practice.

On the defensive side of the ball, Richt said that J.J. Green, who rushed for 384 yards as a running back in his freshman season, “looked pretty natural out there” at his new cornerback spot.

Georgia returns to the practice fields on Thursday afternoon.