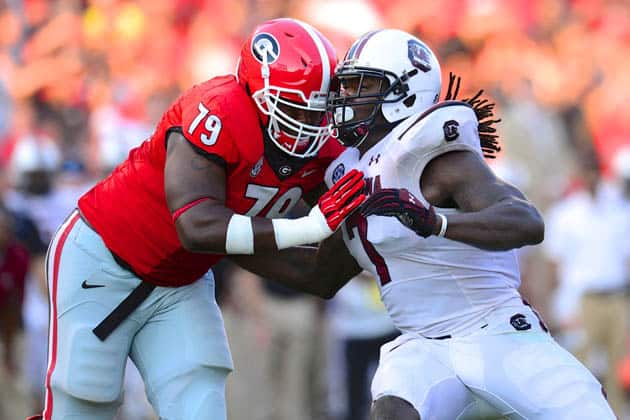 UGA offensive tackle Mark Beard has decided to remain with the Bulldogs for his senior season, the school announced this morning.

Late yesterday, UGA issued a release stating that Beard would “graduate in the summer and transfer to another institution to complete his final year of eligibility.”

The release included quotes from head coach Mark Richt and Bear himself.

“We appreciate Mark’s contributions to our program the last two years and wish him the very best for his final year of eligibility,” Richt said.

I’m grateful for the experience I’ve had at Georgia and that I’ll leave with a degree from UGA,” Beard said. “I’m looking forward to the next step in my football career.”

But then this morning, UGA issued another release stating that Mark Beard has asked to return to the team and that Mark Richt agreed.

“Sometimes making a decision and living it out are two different things,” Richt said. “As I’ve mentioned before the same thing happened to me. As a player I told my coach I had decided to leave for what I thought were all the right reasons. But after a few days, I realized it was a bad decision and asked to come back. He took me back and I’m happy Mark will still be part of our program.”

The last two seasons, Beard backed up tackle Kenarious Gates, who has completed his eligibility at Georgia.

In two seasons with the Bulldogs, Beard has played in 26 games and started twice.