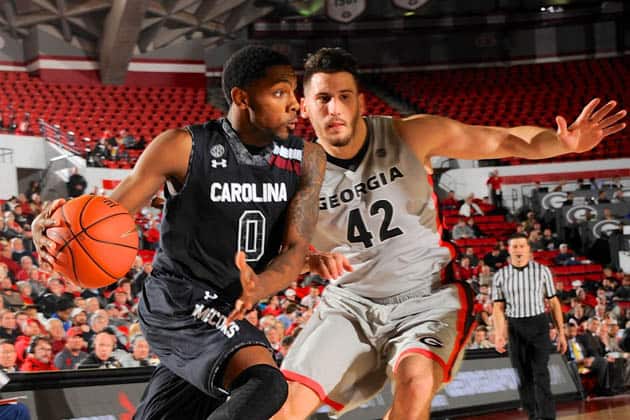 Djurisic joined four other Bulldogs who scored in double-figures. Senior Donte’ Williams led the team in rebounding with ten and was just one point short of a double-double.

“We’re off to a good start in the League. It took us a while to figure out how to play without Kentavious [Caldwell-Pope], but I think we have a better understanding about how this group needs to play to win,” said head coach Mark Fox. “We protect our home court and we have a road win but there’s a long way to go in this league. There is a lot of basketball to be played and it is way too early to talk about anything but the next game. I’m pleased with our start and we certainly have a big challenge ahead in Lexington on Saturday.”

Georgia led the final 37 minutes of the game. After using a 14-5 run to grab an early lead, Charles Mann hit a three-pointer from the top of the key to give Georgia a 14-point advantage, its largest of the first half, with seven minutes remaining. The Bulldogs took a 45-34 lead into halftime.

In the second half, Georgia started where they left off, using a 19-7 run capped by two straight three-pointers from Djurisic to give the Bulldogs a commanding 64-42 lead. The Gamecocks cut its deficit to 15 points with eight minutes remaining, but Georgia responded scoring eight straight to end any threat.

In the win, Georgia had five players score in double figures for the first time since its March 2012 win against Mississippi State 70-68 in double overtime.

The Bulldogs will travel to Lexington, Ky. to take on Kentucky on Saturday. The game is scheduled to tip-off at 1:30 p.m. and will be televised on SEC-TV.

Georgia vs. South Carolina Notes
Worth Noting….
• Georgia’s starting lineup was Marcus Thornton (43rd career start), Brandon Morris (28th), Charles Mann (23rd), Kenny Gaines (17th) and Donte’ Williams (76th). It’s the seventh straight game that Coach Mark Fox has employed this lineup to start the game.
• With the win, Georgia starts 4-1 in conference play for the first time since the 2002-03 season.
• Georgia’s 97 points were the most scored since 1/15/11 when the Bulldogs beat Ole Miss , 98-76.
• Georgia had five players score in double figures for the first time since 3/8/12 when Georgia beat Mississippi State 70-68 in double overtime. Donte’ Williams fell just one point short of giving Georgia six double digit scorers for the first time since 2003 when current assistant coach Jonas Hayes accomplished the feat with five teammates.
• The Bulldogs remain undefeated (10-0) when outrebounding its opponent… Today Georgia won the battle on the boards 39-27.
• A total of 59 fouls were called in the game, setting a new season high. For the Gamecocks, it was the most fouls (33) it has committed all season.
• Georgia made 33 free throws to set a new season-high. (31 vs. Alabama). The Bulldogs’ 50 free throw attempts ties a school record, most recently set on 1/14/97 vs. Kentucky.

The Series: Georgia improves to 53-48 in its all-time series with South Carolina. The Bulldogs also improve to 32-15 when the game takes place in Athens. Georgia has now won seven of its previous eight games versus the Gamecocks.

Next Up: The Bulldogs will travel to Lexington, Ky. to take on Kentucky on Saturday.