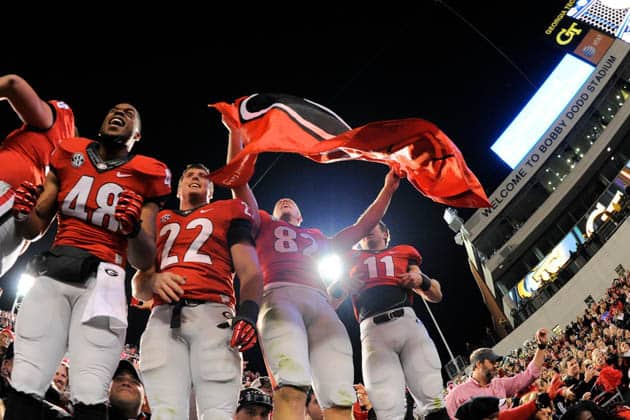 The Bulldogs fell behind the Yellow Jackets 20-0 in the first half, but rallied to force overtime and eventually pulled out a 41-34 victory.

In the first overtime, Georgia Tech struck first on a Vad Lee 2-yard touchdown rush. But Todd Gurley answered from 6-yards out for the Dawgs.

Gurley struck again in the 2nd overtime, but this time it was on the first play from 25 yards out. On Tech’s ensuing possession, the Bulldog defense tipped and then knocked down Lee’s fourth-down pass to escape Bobby Dodd Stadium with another Governor’s Cup.

With the win, Georgia finishes the regular-season 8-4 overall. The Bulldogs have now beaten the Yellow Jackets five straight times, won 12 of the last 13, and extended the overall series lead to 64-39-5.

Starting in his first game in place of Aaron Murray, junior Hutson Mason completed 22-of-36 passes for 299 yards, two touchdowns, and one interception.

Mason’s favorite target was wide receiver Chris Conley, who hauled in seven catches for 129 yards. Michael Bennett had five receptions for 53 yards and a touchdown, while Todd Gurley caught four passes for 36 yards and a TD.

Gurley led the Dawgs on the ground with 122 yards on 20 carries. In addition to his receiving touchdown, Gurley also found the end zone three times on the ground.

Overall, Georgia had 437 yards of offense (299 passing, 138 rushing). The defense surrendered 495 yards to Tech, but did get the turnover and stop at the end to win the game.

Next up for Georgia (8-4, 5-3 SEC) is a bowl game to be announced. The Bulldogs could likely play in the Gator Bowl, but we’ll have to wait until next Sunday to find out. 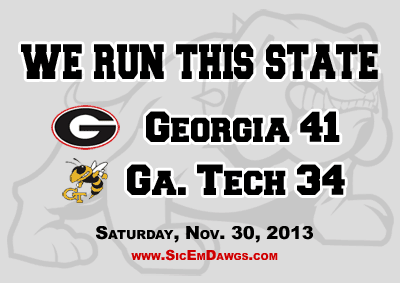