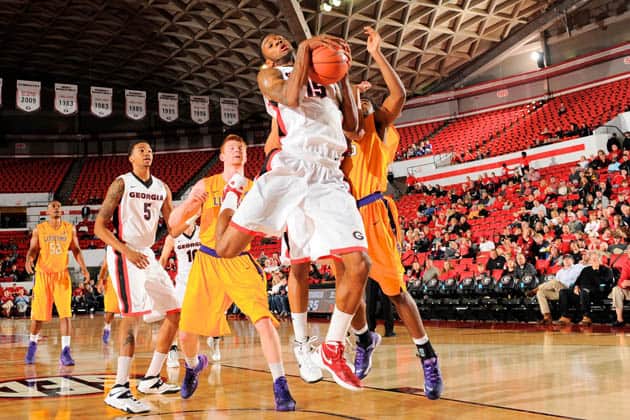 Brandon Morris scored a career-high 17 points, including nine in the last 3:15, to lead the Georgia Bulldogs over the Lipscomb Bison 84-75 on Saturday.

The win was the third in a row for the Bulldogs and improves their overall record to 4-4 on the season.

“It’s good to win,” said head coach Mark Fox. “I thought we did some nice things offensively. We were able to defend pretty well in the first half and build a significant lead. One thing we talked about coming into the game was taking away the three-point line, which we did a very good job of after the first few minutes in the first half and then in the second half allowed ten threes. We just didn’t defend well with the lead, which is a real sign of immaturity. But it’s good to win and beat a real hard-nosed crew.”

Charles Mann, Georgia’s starting point guard, did not play due to a nagging leg injury. Walk-on Taylor Echols, who had only played 37 minutes for the Bulldogs in his career, played 23 minutes and scored nine points. He also added three rebounds, four assists, and two steals.

Brandon Morris was the leading scorer for Georgia with 17, and he also had four rebounds, three assists, a steal, and two blocked shots.

But Lipscomb countered with a 24-9 run behind six three-point field goals. The Bison would only get as close as four points before the Bulldogs pulled away for the final time.