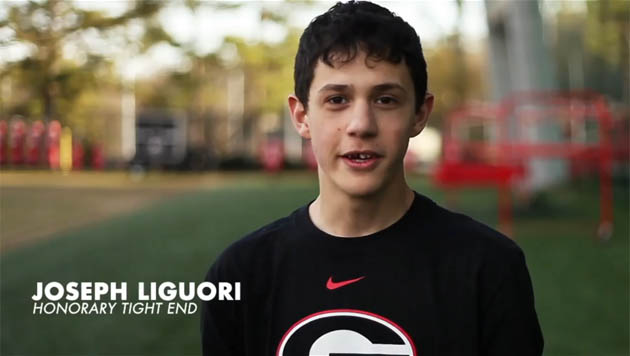 Joseph has dreamed about playing at UGA since he was five years old, and his dream finally came true.

“At Make-A-Wish, our mission is to bring hope, strength, and joy to children with life threatening illnesses” Wish Coordinator Sara Lawrence said.

“Joseph’s wish was to be a UGA football player. He wanted to be a tight end, so he got shoulder pads, a helmet and everything. And he went out and ran some plays and caught same catches, and he became a football player today.”

“I want my man Joseph to run this play. If he happens to get in the end zone, I want a celebration like we’ve never seen at the University of Georgia.”

Joseph made it to the end zone, and boy did they celebrate! Congrats Joseph, and thanks to UGA for making his wish come true!