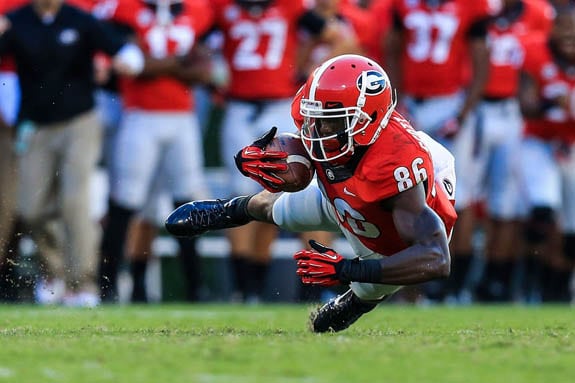 Wide receiver Justin Scott-Wesley was arrested Thursday night by the UGA police and charged with possession/use of a drug object.

Scott-Wesley tore an ACL in his knee against Tennessee and is out for the season. His suspension, which would likely be one game based on UGA student policy, will likely be served to start the 2013 season. Georgia opens 2013 at home vs. Clemson and then travels to South Carolina.

“I’m disappointed in the news about Justin,” head coach Mark Richt said in a statement. “We will discipline him according to our policy. We will also educate him, provide him counsel so he can learn from this, and be able to move forward in a very positive direction. I’m confident he will respond properly to the correction process.”

According to the UGA police report, a resident assistant at Rooker Hall reported the smell of marijuana coming from one or two dorm rooms. Scott-Wesley, who was on crutches, answered the door and indicated to the police after they questioned him that “smoke” was the reason they were there.

After denying using marijuana a few times, Justin Scott-Wesley admitted to smoking a small amount from a pipe earlier in the day and that it was all gone. He then consented to a search.

The player admitted he had smoked the marijuana through a pipe, according to the report, and upon a search the officer discovered two small red Ziplog baggies containing what proved to be pot.

It wasn’t until the next morning, when tests proved the substance to be marijuana, that a warrant was issued for Scott-Wesley’s arrest. He was released on bond later on Thursday.