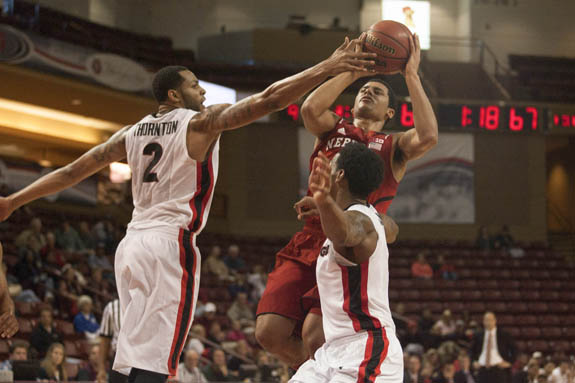 The Nebraska Cornhuskers beat the Georgia Bulldogs 73-65 on Sunday afternoon in the seventh-place game of the 2013 Charleston Classic.

With the loss, Georgia finished in last place (eighth) in the tournament after going 0-3 against Davidson, Temple, and Nebraska. Georgia has now lost four straight games and sits at 1-4 overall.

The Bulldogs started out well and had multiple leads throughout the first 15 minutes of the first half. But after several missed shots, the Bulldogs quickly found themselves down by as many as nine points. But the Dawgs battled back to make it a three-point deficit at the half (34-31).

In the second half, the two teams traded baskets for awhile, but then poor free-throw shooting gave Nebraska a lead they wouldn’t surrender. Georgia finished the game shooting only 16-of-30 from the free-throw line (53.3%), which won’t win you many ballgames.

“We’re just not good enough yet,” said head coach Mark Fox. “We’re not complete enough to beat good teams. We left a lot of points at the foul line tonight in a critical time late in the second half. When you do that, you have to be perfect at the other end and we’re not good enough defensively or on the glass to be perfect down there.

“I’m disappointed in our results here. There’s no way to hide the fact that we haven’t gotten it done with this group yet, but they’re going to continue to grow and improve. Now we can go back to work. We just weren’t ready to play really good teams and we played four in a row and now we’ve got to get better.”

Charles Mann led the Bulldogs with 16 points, while Brandon Morris scored 14 off the bench and Marcus Thornton added 13.

Georgia’s next game is Friday, Nov. 29 against Appalachian State in Athens. The game will be televised by CSS at 5pm ET.