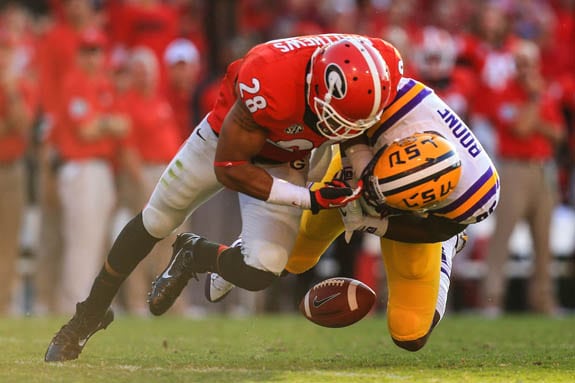 Running back Todd Gurley and safety Tray Matthews are both listed as doubtful and will likely miss the Vanderbilt game this Saturday.

Gurley sprained his ankle during a tackle in the LSU game. He left the game early and has not played a snap since then.

Yesterday, Mark Richt said that Gurley did some light running and “football-related” things, but wasn’t able to do much in practice.

“We’re preparing to play without him,” Richt said.

Gurley still leads the Bulldogs in rushing this season with 461 yards on 71 carries and four touchdowns. He had even entered the Heisman discussion until his injury relegated him to the sidelines.

Tray Matthews is still nursing a hamstring injury and appears to be behind Gurley in his recovery.

“Tray isn’t even attempting right now to do any football-specific drills,” Richt said.

That leaves Georgia short-handed again as they travel to Vanderbilt this weekend (Noon ET, CBS). The Dawgs will also be without wide receiver Michael Bennett for a few more weeks due to a torn meniscus.

The list of Bulldogs out for the season due to torn ACL’s includes running back Keith Marshall and wide receivers Justin Scott-Wesley and Malcolm Mitchell.

Although Gurley is listed first on the depth chart for Vandy, freshman J.J. Green will likely start and will share carries with fellow freshman Brendan Douglas. The two have combined for 429 yards on 69 carries (6.2 YPC) and two touchdowns.