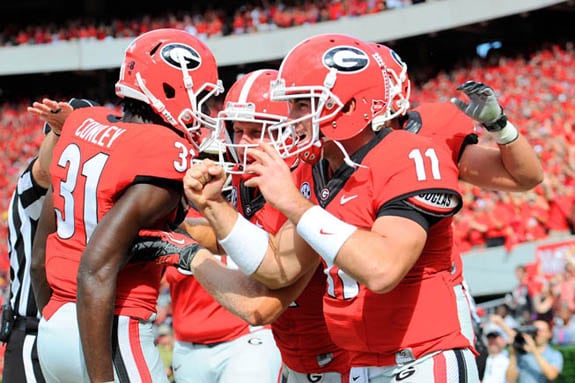 Georgia has played the toughest schedule so far in 2013. (Dale Zanine-USA TODAY Sports)

Through Week 5 of the 2013 college football season, Georgia’s schedule is regarded as the nation’s toughest in the five available computer rankings.

Georgia opened the season ranked No. 5 in both the AP and Coaches Poll. Their first game was at No. 8 Clemson, which they lost 38-35. The Clemson Tigers (4-0) are currently ranked 3rd in the AP and 4th in the Coaches.

Georgia then got a break in their schedule when they hosted and beat North Texas 45-21. But the Mean Green aren’t a slouch in the computer rankings right now, coming in at No. 80 in the Sagarin ratings.

Last week, Georgia became just the fourth team in the BCS era to play three Top 10 teams in their first four games when they hosted No. 6 LSU. The Bulldogs won the game 44-41.

All of this adds up to what many believe is the nation’s toughest schedule so far this season. Five of the computer rankings that are used in the BCS formula agree, as Georgia is ranked first in each one.

Listed below are the current Top 10 toughest schedules from each BCS computer source (Note: Peter Wolfe’s initial rankings will not be released until Oct. 13, 2013).

While Georgia’s schedule is currently ranked first, it likely won’t be in that position as the end of the season. Florida is currently the only ranked team left that Georgia plays. The Gators are ranked 18th in the AP and 19th in the Coaches.

Two other teams could possibly be ranked when the Bulldogs play them: Missouri (4-0) and Georgia Tech (3-1). And if Georgia does make the SEC Championship Game, they would likely get a schedule bump there also.

Georgia’s opponent this weekend, Tennessee, has a decent Sagarin rating at No. 58. Depending on other factors, the Dawgs could have the toughest schedule for another week or two.