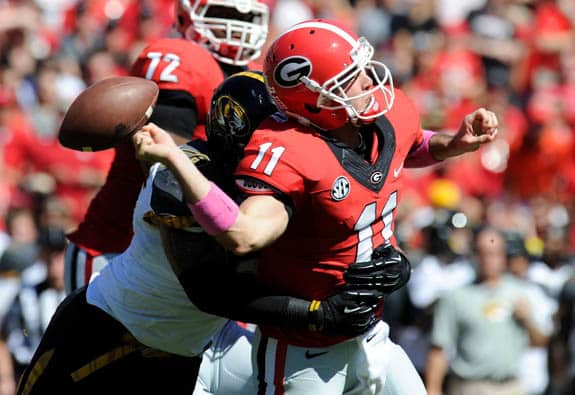 Georgia turned the ball over four times and the defense continued to struggle, which resulted in a 41-26 loss to the No. 25 Missouri Tigers. The loss drops Georgia to 4-2 overall and 3-1 in the SEC and puts Missouri in the driver’s seat in the Eastern Division.

The Bulldogs played a lackluster first half and fell behind 28-10. But to open the second half, UGA kicked a field goal and then got two touchdown passes from Aaron Murray to cut Missouri’s lead to 28-26. Chris Conley dropped the two-point conversion that would have tied the game.

Later, in the fourth quarter, Georgia tackled Missouri quarterback James Franklin hard which put him out of the game. The Tigers brought in their backup Matty Mauk. Soon after, Mauk threw a lateral to wide receiver Bud Sasser, who then threw a 40-yard touchdown pass to L’Damian Washington.

Missouri would score another touchdown after an Aaron Murray interception to put the game away.

Murray finished the game 25-of-45 for 290 yards, three touchdowns, and two interceptions.

The Bulldogs also had two costly fumbles. Late in the 2nd quarter, Murray was hit and his fumble was returned 21 yards for a TD. Then on the next possession, Brendan Douglas fumbled at the Missouri six-yard line, which ended a sure scoring drive for Georgia.

On defense, Georgia failed to stop Missouri on several third down situations, which has become somewhat of a trend lately under Todd Grantham. They also didn’t create a turnover and have only intercepted one pass in six games this season.

The Bulldogs actually outgained Mizzou 454-375. But in the end, the turnovers and lack of stops in key situations doomed the Dawgs. The injuries also played a factor, as Georgia was missing several starters at the skill positions.

Missouri scored 41 points (six on defense). That means the Dawgs are now surrendering 33.4 points per game overall and 35.75 in SEC play.

Up next for Georgia is a trip to Nashville to face Vanderbilt on Saturday, Oct. 19. The game will be televised by CBS at noon ET.