Georgia falls to 15th in AP, 16th in Coaches Poll for Week 8

Georgia falls to 15th in AP, 16th in Coaches Poll for Week 8 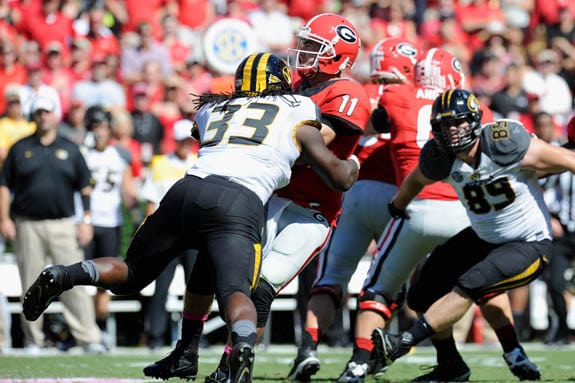 After their 41-26 loss to the Missouri Tigers, the Georgia Bulldogs have fallen to 15th in the AP Poll and 16th in the USA TODAY Sports Coaches Poll.

The Bulldogs went into the game ranked 7th in both polls. Missouri, previously ranked 25th in the AP and unranked in the Coaches, vaulted up to 14th in both the AP and Coaches Polls.

Georgia had been living on the edge all season with narrow victories over LSU, Tennessee, and South Carolina. In each of those games, the Bulldog defense surrendered too much yardage and too many points.

With the multitude of starters and playmakers on offense that were out, there was a perfect storm for disaster. Georgia’s luck simply ran out against Missouri.

But to do that, Georgia will need to win out and also get some help from a few teams that Missouri plays. The Bulldogs need Missouri to lose twice, and that’s not out of the realm of possibility. Mizzou quarterback James Franklin is likely out at least six weeks, and they still have to play Florida, South Carolina, Texas A&M, and Tennessee.

Georgia’s next game is this weekend at Vanderbilt (Noon ET, CBS). The Dawgs are then off on Oct. 26 before heading down to Jacksonville to take on Florida. If Todd Gurley, Michael Bennett, and Tray Matthews are healthy by then, the Dawgs have a good chance of making it three in a row over the Gators.

The Bulldogs then close the season with Appalachian State at home, at Auburn, Kentucky at home, and at Georgia Tech.

Georgia is ranked 16th in the first Harris Interactive Poll of the 2013 season. The Harris Poll accounts for 1/3 of the BCS formula, along with the AP and Coaches Poll.