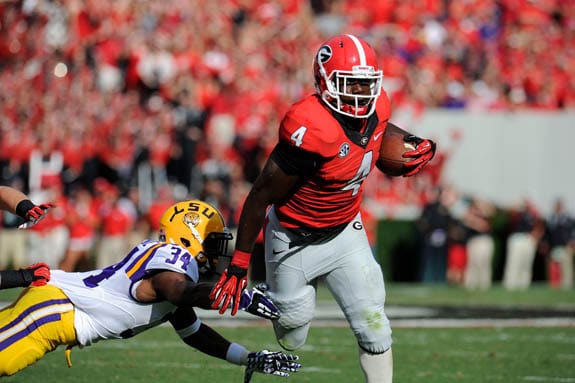 On Saturday, the 6th-ranked Georgia Bulldogs travel to face the Tennessee Volunteers at Neyland Stadium in Knoxville. The game will be televised by CBS at 3:30 p.m. ET.

Georgia enters the game 3-1 and 2-0 in the SEC after a thrilling 44-41 victory over then No. 6 LSU. After the win, the Dawgs moved up three spots in the AP Poll and four spots in the Coaches Poll to sixth in each.

Tennessee (3-2, 0-1) escaped South Alabama last week 31-24. Before that, the Volunteers were thrashed at Oregon 59-14 and lost an ugly game at Florida 31-17. The Vols are led by new head coach Butch Jones after Derek Dooley was fired last year.

The Volunteers will wear their new “Smokey Gray” alternate uniforms for the Georgia game.

On paper, Georgia should win this one going away. However, the Bulldogs are only about a 10-point favorite.

Why? First, Georgia might be prime for a let down after their big win last week vs. LSU. Second, running back Todd Gurley sprained his ankle on Saturday and is questionable for the game. Safety Tray Matthews is also doubtful.

But with Senior quarterback Aaron Murray leading the team and a more focused Mark Richt and coaching staff, Georgia shouldn’t sleepwalk their way through Saturday’s game. The Dawgs know what’s at stake here and the rest of the regular season.

Take care of business and play in the SEC Championship again, possibly with another shot at Alabama, and then claim a spot in the BCS National Championship Game in Pasadena.