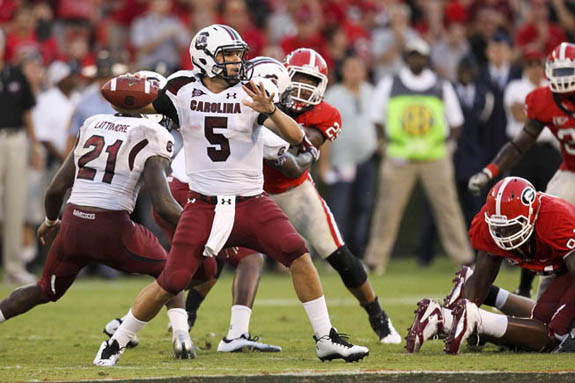 On Saturday, the 11th-ranked Georgia Bulldogs host the 6th-ranked South Carolina Gamecocks in a huge SEC East showdown. The game will be televised by ESPN at 4:30 p.m. ET.

Georgia enters the game 0-1 after falling at then No. 8 Clemson 38-35 last week. The Dawgs had been ranked 5th in both polls, but fell to 11th in the AP and 12th in the Coaches poll after the loss.

South Carolina is 1-0 and ranked 6th in both polls. The Gamecocks beat North Carolina last Thursday night in impressive fashion, 27-10.

Although the Bulldogs have dominated the series against the Gamecocks, South Carolina has bragging rights after defeating Georgia three straight seasons and four out of the last six.

In order to turn the tide tomorrow, the Dawgs must contain Gamecock superstar Jadeveon Clowney. Aaron Murray has to have time to get the ball to his receivers, and the offensive line needs to improve from their mistakes last week.

On defense, Grantham needs to get his young group to contain the middle rush and they also need to wrap up tackles better. The D should be bolstered by the return of Josh Harvey-Clemons after a one-game suspension.

The Dawgs will be without wide receiver Malcolm Mitchell, who tore his ACL last week when celebrating Todd Gurley’s first touchdown at Clemson. Also out is kicker Marshall Morgan, who is suspended for a BUI he received over the summer.

ESPN GameDay will be in Ann Arbor for the Michigan-Notre Dame game, but they will be airing a segment called “How Do You Stop Clowney?” Crews were in Athens this week filming area locations with the Clowney phrase on signage.