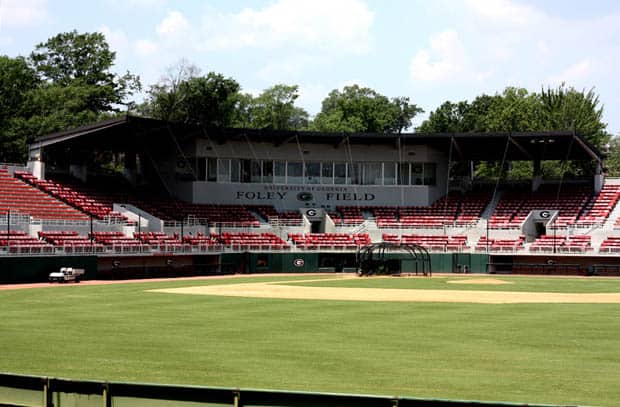 The Georgia Bulldogs have announced their complete 2014 baseball schedule. The Diamond Dawgs open the 2014 season at home on February 14 against the Georgia Southern Eagles.

After an opening weekend series against GSU, the Bulldogs entertain Kennesaw State in a single game before heading to Tallahassee for a big non-conference series against the Florida State Seminoles.

FSU is the biggest name on the non-conference slate. The Dawgs also have three games against in-state rival Georgia Tech and two against Clemson. UGA will host the Yellow Jackets on March 4, play at Tech on April 15, and then face them at Turner Field in Atlanta on May 13. The Turner Field game benefits Children’s Healthcare of Atlanta.

Georgia’s SEC schedule was announced back in June. The Dawgs will host three-game series against Mississippi State, Texas A&M, Tennessee, South Carolina, and Kentucky and will travel to play LSU, Missouri, Florida, Vanderbilt, and Ole Miss.

The Diamond Dawgs will not face SEC West foes Alabama, Arkansas or Auburn in 2014.

The 2014 season will be the first under new head coach Scott Stricklin.

“We are all looking forward to the start of the season and representing the University of Georgia on the baseball field,” Georgia coach Scott Stricklin said. “Our schedule is one of the toughest in the country when you consider the 10 weekends of SEC play plus non-conference matchups with Florida State, Clemson and Georgia Tech.  It is going to be a great challenge and we are preparing everyday to meet that challenge.”