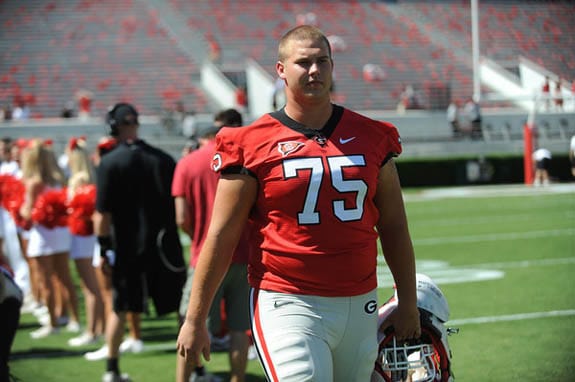 Kolton Houston has been reinstated. (Image via UGA)

UGA offensive lineman Kolton Houston has been reinstated by the NCAA, the school officially announced today.

Houston served a three-year suspension after a routine drug test detected the presence of a banned substance in his blood. The substance was a steroid that was medically administered after Houston had surgery on his shoulder.

In his most recent drug test, the results indicated that the banned substance (norandrolone, an anabolic steroid) fell below the NCAA’s threshold.

UGA Senior Associate Athletic Director for Sports Medicine called Kolton Houston this morning with the news, and today happened to be Houston’s birthday.

“This is the best birthday present I’ve ever had,” Houston said. “I had almost reached the point where I thought this situation would never end. When I got the call, I broke down and cried for about 30 minutes. I had that much emotion stored up and it felt good to get it out. I’m ready now to show what I can do.”

“This has been a long and very complex case and we have tried to be advocates for Kolton throughout this three-year process,” said UGA Senior Associate Athletic Director for Sports Medicine Ron Courson. “We would like to thank the NCAA staff, as well as the members of the NCAA Committee on Competitive Safeguards and Medical Aspects of Sports, who assisted with this case. There are a number of medical professionals who played key roles in this appeal, from physicians to pharmacists to biomedical researchers to drug toxicologists. This was truly a team effort.”

It's an AWESOME DAY FOR KOLTON HOUSTON AND FOR GEORGIA!! Now he can play the game he loves with the teammates he loves!! Go Dawgs!!

“The big thing is that we’re just really happy for Kolton,” Georgia coach Mark Richt said. “We’re thankful for all the work Ron Courson put in and for those who kept believing, but mostly we’re happy for him. We don’t want to put any pressure on him like now he’s got to be a star. The bottom line is, we’re happy he’ll be able to participate for Georgia. We’re glad it all worked out.”

Houston, now 22, has two years of eligibility remaining and can petition the NCAA for a third season if he desires.