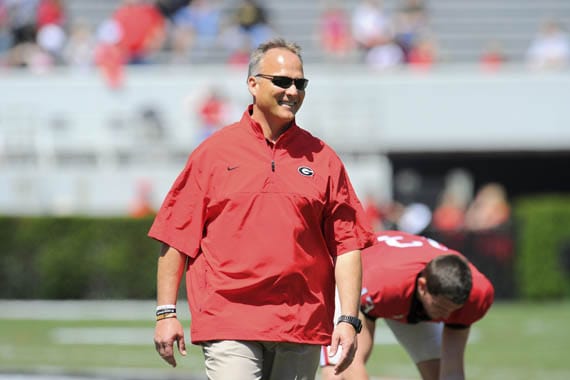 Mark Richt and the Georgia Bulldogs had a huge weekend on the recruiting trail, picking up four verbal commitments for the class of 2014.

Gant is a 6-3, 184-pound defensive back from Lakeland, FL (Lake Gibson). He committed to UGA over offers from most of the top schools, including Alabama, Cincinnati, Florida, Florida State, Louisville, Ohio State, Tennessee, USC, and Wisconsin.

Rivals.com rates Gant as a 3-star recruit and the no. 41 safety in the country. Scout.com rates him 4-stars and the no. 19 safety.

Sims is a 6-5, 270-pound offensive lineman from Clyattville, GA (Lowndes). He selected the Dawgs over schools such as Alabama, Cincinnati, Florida State, Miami (FL), Mississippi State, and Tennessee.

Rivals.com rates Sims as a 2-star recruit while Scout rates him 3-stars and the no. 34 offensive tackle.

Scout rates Williams as a 4-star recruit and the 42nd best wide receiver in the country. Currently, Rivals rates him as a 2-star recruit.

Wynn is the highest rated recruit of the four commitments received over the weekend. Rivals rates him 4-stars, no. 89 in the Rivals100 2014, and the no. 2 offensive guard.

Scout.com rates Wynn 4-stars and the 10th best offensive guard in the country.

Shortly after reeling in a commitment from Isaiah Wynn, Wayne County wide receiver Krenwick Sanders de-committed from the Bulldogs. Sanders committed to UGA in November of 2012