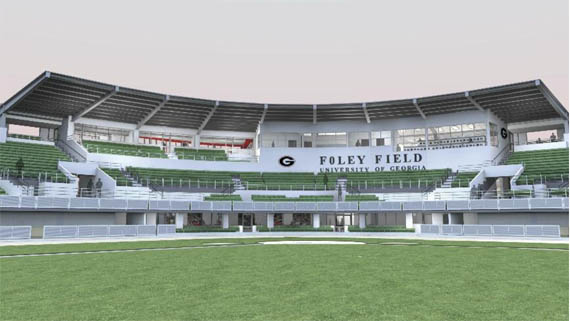 The UGA Athletic Association and the Georgia Bulldog Club have announced renovation plans for Foley Field.

The project will cost $10 million and will include new locker rooms, a lounge, and training areas. Amenities that will be added for fans include a larger concourse and two new club-seating areas. A bigger press box and a new entrance to Foley Field are also in the plans.

Fundraising for the $10 million project is now underway. The Foley family of Columbus, GA kicked off the fundraising with a $1 million donation.

“What we are going to do next is going to wow people,” said Georgia baseball coach Scott Stricklin. “At some point, when a recruit is on this campus, we need them to say wow. And that is what Foley Field is going to be in the very near future.”

“It is time for Foley Field to regain its former glory,” said UGA athletic director Greg McGarity, UGA’s Director of Athletics. “The visionaries choosing to become so meaningfully involved in the program will not only help offset the cost of the $10 million project, but also will forever be associated with this monumental commitment to the future of Georgia Baseball and Foley Field.”

Per Greg McGarity, the UGA athletic department will match $5 million from funds on hand once donations to the project reach $5 million.