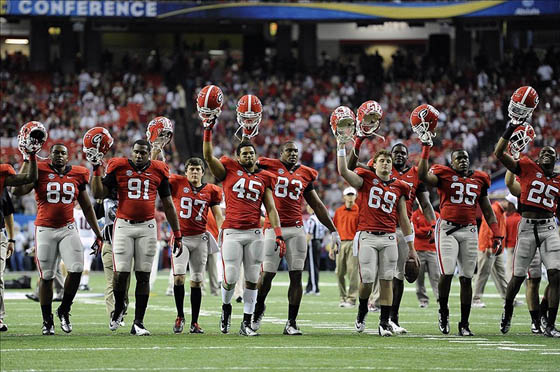 A 45-yard touchdown pass from A.J. McCarron to Amari Cooper proved to be the game winner as #2 Alabama defeated #3 Georgia in the 2012 SEC Championship Game. The loss drops Georgia to 11-2 on the season.

The Bulldogs had a chance to win the game in the final seconds when Aaron Murray led the Dawgs all the way to Alabama’s eight-yard line. But instead of spiking the ball, UGA decided to run a play for a TD in the end zone. Unfortunately, Murray’s pass was tipped at the line of scrimmage and was caught by Chris Conley.

Conley was short of the goal line and since Georgia had no time outs, they were unable to stop the clock which painfully ran out.

Murray finished the game 18-of-33 for 265 yards, a touchdown and an interception. Tavarres King was Murray’s top target, catching five passes for 142 yards. Tight end Jay Rome caught Murray’s TD pass, which was his only catch of the game.

Todd Gurley led the Dawgs on the ground with 23 carries for 122 yards and two touchdowns.

Overall, Georgia’s offense finished with 394 yards. Alabama got the better of Georgia in total yards with 512, and 350 of those yards were on the ground.

A win would have propelled Georgia to the BCS National Championship Game, but Alabama will go instead.The Bulldogs will now have to settle for a lesser bowl game. Last night it was rumored that Georgia would play in the Cotton Bowl, but today it appears likely that they will go the Capital One Bowl to face Nebraska.

An official announcement will come later today. In the meantime, you can check out the 2012-13 Bowl Schedule.