On Saturday, the Georgia Bulldogs host the Georgia Southern Eagles at Sanford Stadium in Athens. The game will be televised by WSB-TV Channel 2 at 1:30 p.m. ET.

WSB-TV Channel 2 is the ABC affiliate in Atlanta, Georgia and has a coverage area that includes the 53 county Atlanta TV market. According to Wikipedia, this includes counties in Northwest Georgia (Catoosa, Dade, Muray, Walker, and Whitfield), Northeast Georgia (Elbert, Franklin, Hart, and Stephens), South Georgia (via Cox Cable as far South as the Florida border), and Coffee County (Charter).

Only cable and satellite customers in the WSB-TV viewing area will receive the game. Dish Network and DirecTV subscribers in the WSB area should be able to view the game on Channel 2.

If you are outside of the WSB-TV broadcast area, you can view the game online via ESPN3 or you can order the game via ESPN GamePlan as a single pay-per-view event (Dish Network Channel 463; DirecTV Channel 792).

The game will be blacked out in most of the WSB broadcast area. The blackout map from ESPN, which was released Wednesday, is posted below: 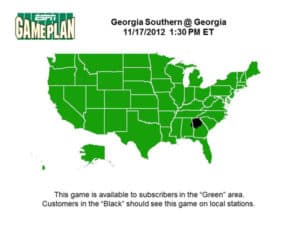 For reference, the last time a Georgia football game was televised on WSB-TV Channel 2 was the 2010 Idaho State game. That game was blacked out on ESPN3 and ESPN GamePlan in the WSB broadcast area (except South Georgia).

Note: This post will be updated as new information is received.