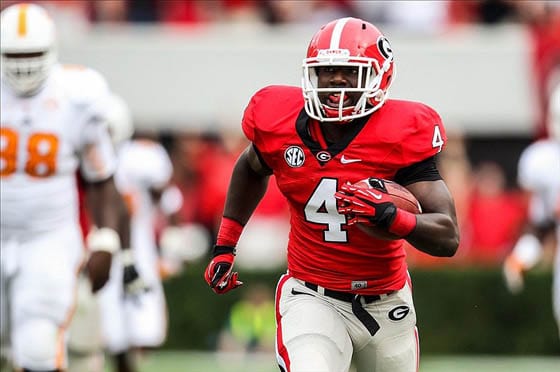 Keith Marshall runs for a TD against the Vols. Daniel Shirey-US PRESSWIRE

The Georgia Bulldogs survived a wild shootout with the Tennessee Volunteers, winning 51-44 on Saturday. The win improves Georgia’s record to 5-0 overall and 3-0 in the SEC.

Freshmen running backs Keith Marshall and Todd Gurley, collectively referred to as “Gurshall,” provided several highlight reel runs for the Dawgs. Marshall led with 10 carries for 164 yards and two touchdowns. His TD runs were from 75 and 72 yards.

Gurley had touchdown runs of one, two, and 51 yards. He finished with 130 yards on 24 carries.

Overall, the Georgia offense piled up 560 total yards, 282 on the ground and 278 through the air. It doesn’t get much more balanced than that.

Although Georgia’s defense was finally back at full strength, Tennessee moved the ball well on the Dawgs and racked up 478 yards. But the defense buckled down late in the fourth when the game was on the line.

Three turnovers by the Bulldogs offense led to three touchdowns by the Vols. An Aaron Murray pass was intercepted and returned 35 yards for a TD, and fumbles by Murray and Marshall were recovered at the UGA 8 and 18, respectively.

Special teams play was also a point of concern for the Bulldogs last night. Kicker Marshall Morgan only made 4-of-6 extra point attempts, but did hit a 50-yard field goal. Malcolm Mitchell made a poor decision fielding a punt, allowing it to land and roll all the way to the Georgia one-yard line. And Todd Gurley fielded a kickoff but stepped out of bounds at his own one-yard line.

The Bulldogs will need to cut down on the turnovers and special teams mistakes going forward. Luckily, Georgia’s offense covered up those mistakes yesterday.

Georgia’s next game is Saturday, Oct. 6 at #6 South Carolina (5-0, 3-0 SEC). The game will be televised by ESPN at 7 p.m. ET. ESPN College GameDay will broadcast live from Columbia beginning at 9 a.m. on ESPNU and continuing at 10 a.m. on ESPN.