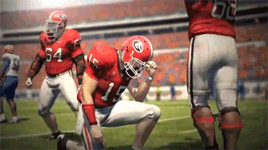 Tim Tebow…as a Georgia Bulldog? If you’ve ever wanted to do the unthinkable with your beloved Dawgs, now you can.

EA SPORTS NCAA Football 13 will be released on July 10. This years edition features a Heisman Challenge mode, where you can place one of 16 former Heisman Trophy winners on any team.

Georgia’s Herschel Walker is one of those players along with the aforementioned Tim Tebow, who EA Sports chose to feature in their promo spot. Georgia fans everywhere are puking in their mouths.

Tebow’s character doesn’t actually ship with the game unless you order it from Gamestop, and you also get Mark Ingram and Matt Leinart.

Other winners available through the demo download are Tim Brown, Archie Griffin, and Jim Plunkett.

Now before anyone says we are advocating buying a game and adding Tebow to Georgia’s roster, remember it’s just a game. And I don’t think EA SPORTS necessarily has it out for UGA with this ad. They merely used one of the most controversial and popular figures in sports today to create hype for their product.

Note: There’s one error in the details of the game in the video below. Can you figure out what it is?