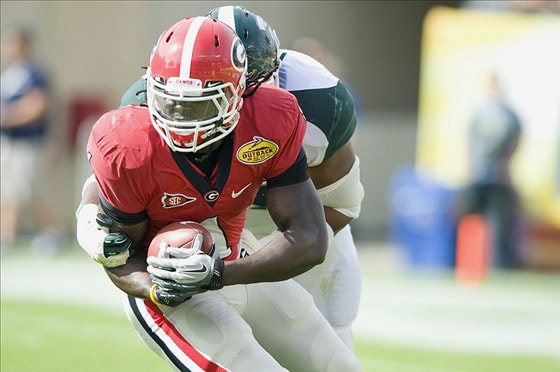 Isaiah Crowell, who was dismissed from the Georgia Bulldogs last Friday, will enroll at Alabama State.

Crowell was kickoff off of the team after being arrested early last Thursday morning and charged with carrying a concealed weapon, possessing a weapon in a school zone, both felonies, and an altered ID mark on the gun, a misdemeanor.

UGASports.com spoke with Alabama State head coach Reggie Barlow, who confirmed that Crowell has been admitted to the school.

“I talked with Mrs. Debbie, Isaiah’s mom, and I really wanted to get clearance from them to be able to go ahead and say that it was a go. She’s given me permission to do that,” Barlow said. “He’s been admitted and will start our second session of summer school on Monday.”

Crowell will be eligible to play this Fall for the Hornets, an FCS team in the Southwestern Athletic Conference. Alabama State has a brand new stadium slated to open on November 22, 2012 and it will seat 30,000.

The Hornets went 8-3 in 2011 and were Co-Champions of the SWAC’s Eastern Division.