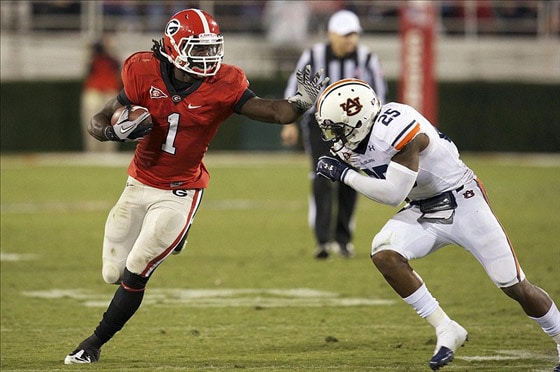 The SEC has adopted the 6-1-1 football schedule format for the foreseeable future, which protects the Georgia-Auburn series.

SEC presidents and athletic directors met in Destin, Florida this week to discuss future football schedules, among other items. The 6-1-1 format was favored by an “overwhelming majority” according to SEC commissioner Mike Slive.

The format was approved in part because it allows historical rivalries to continue, such as Georgia-Auburn and Florida-Tennessee.

One difference is that the rotating cross-division opponent will now be played in succession rather than home-and-home in consecutive years. This will allow for teams to cycle through the six cross-division teams in six years rather than 12.

The only drawback is that West Division teams other than Auburn will only visit Sanford Stadium once every 12 years. It could be slightly less depending on how the rotation is set.

While the schedule and rotation for 2013 and beyond wasn’t announced, it’s likely that Georgia will face Alabama, Arkansas or LSU in 2013 since they haven’t faced either of those teams in the regular-season since 2009.

Georgia’s series with Auburn, dubbed The Deep South’s Oldest Rivalry, began in 1892 and has been played yearly since 1944. Auburn leads the overall series 54-53-8, but Georgia has won seven of the last ten games.