It wasn’t pretty, but the Georgia Bulldogs got the job done. Blair Walsh kicked four field goals to lead the Dawgs over Kentucky 19-10. With the win, Georgia clinches the SEC East Title and will play in the 2011 SEC Championship Game.

Georgia finally put the game away on the first play of the fourth quarter when Aaron Murray completed a 7-yard pass to Marlon Brown for a touchdown. It was the only score for either team in the second half.

Although the score was close and both teams had four turnovers, the Bulldogs dominated the stat sheet. Georgia outgained Kentucky 317 yards to 165 and held the ball 10:14 longer than the Wildcats.

Murray completed 16 of 29 passes for 162 yards, one touchdown and one interception. Orson Charles led the Georgia receivers with 3 catches for 40 yards.

Isaiah Crowell started the game at tailback but left after injuring his ankle on the second play. Brandon Harton stepped in and rushed 23 times for 101 yards. Carlton Thomas, the no. 2 running back, was not at the game today due to an unspecified violation of team rules.

Georgia has now won nine consecutive games and improves to 9-2 overall (7-1 SEC). They will face either Alabama, Arkansas or LSU in the Championship Game on Dec. 3.

Next up for Georgia is “Clean Old Fashioned Hate.” The Bulldogs travel to Atlanta to face Georgia Tech on Saturday, Nov. 26 at 12:00 p.m. The game will be televised by ABC or ESPN. 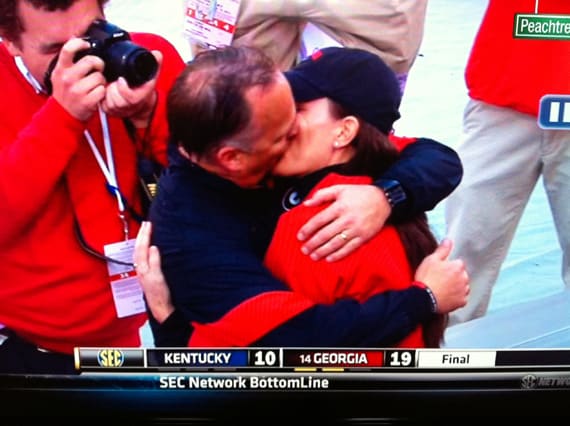