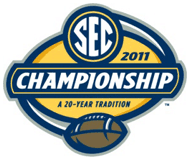 The Georgia Bulldogs and the LSU Tigers will face off in the 2011 Dr. Pepper SEC Championship Football Game on Saturday, Dec. 3 at the Georgia Dome in Atlanta. The game will be televised by CBS at 4:00 p.m. ET.

Georgia, the Eastern Division winner, will be the visiting team but will wear red jerseys. LSU is designated as the home team and chose to wear their traditional white jerseys.

Georgia will head into the game ranked 12th in the AP Poll and 14th in the ESPN/USA Today Coaches Poll. LSU is the unanimous number one ranked team in both polls, plus they top the BCS Standings with a perfect 1.000 score.

If you want a parking pass in advance, you can do that through GWCC/AAA Parking. As of Sunday, Yellow and Blue Lot passes are available for $8 each and Brown Lot passes are $10 each. RV Marshalling Yard passes are $60.

ESPN College Gameday will broadcast live from the site of the game beginning at 9:00 a.m. ET on ESPNU and then continuing on ESPN from 10:00 a.m. until noon.