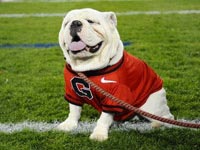 Uga VIII, the Georgia Bulldogs mascot, has passed away, the University of Georgia has announced. Nicknamed “Big Bad Bruce”, he was born on September 12, 2009 and was only 16 months old.

The grandson of Uga VI, Uga VIII took over for interim mascot “Russ” on October 16, 2010 prior to the Vanderbilt game. Last month it was reported that Big Bad Bruce was suffering from lymphoma.

After less than a year as the Bulldogs mascot, Uga VIII had a 3-3 record.

Uga VIII, the white male English Bulldog mascot of the University of Georgia, passed away early Friday. He had been diagnosed with lymphoma in early January of this year.No formal funeral ceremony is scheduled.

Born Sept. 12, 2009, Uga VIII had been introduced to the Bulldog Nation Saturday, Oct. 16, during pre-game ceremonies of the Georgia-Vanderbilt game in Sanford Stadium. He served the final six regular season games of 2010.

According to the Frank W. “Sonny” Seiler family, long-time owners of the Bulldog line of mascots, “Russ” will serve again as the interim mascot. Russ served as interim mascot the final two games of 2009 and the first six games of 2010 prior to Uga VIII being introduced. The continuous line of Georgia Bulldog mascots have been owned by the Seiler family for more than 50 years.

Uga VIII was a Damn Good Dawg! Our thoughts and prayers go out to the Seilers and the Bulldog Nation.