EverBank has announced that they have signed a deal for naming rights to Jacksonville Municipal Stadium. The new name of the stadium will be Everbank Field (ht – Marc Weiszer).

The stadium is home to the NFL’s Jacksonville Jaguars and is currently the home of the annual Georgia-Florida game through 2016.

EverBank will pay $16.6 million over five years for naming rights. They will also receive the following: 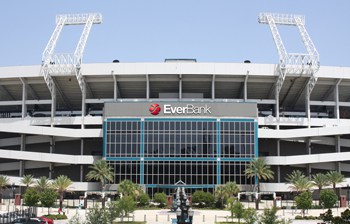