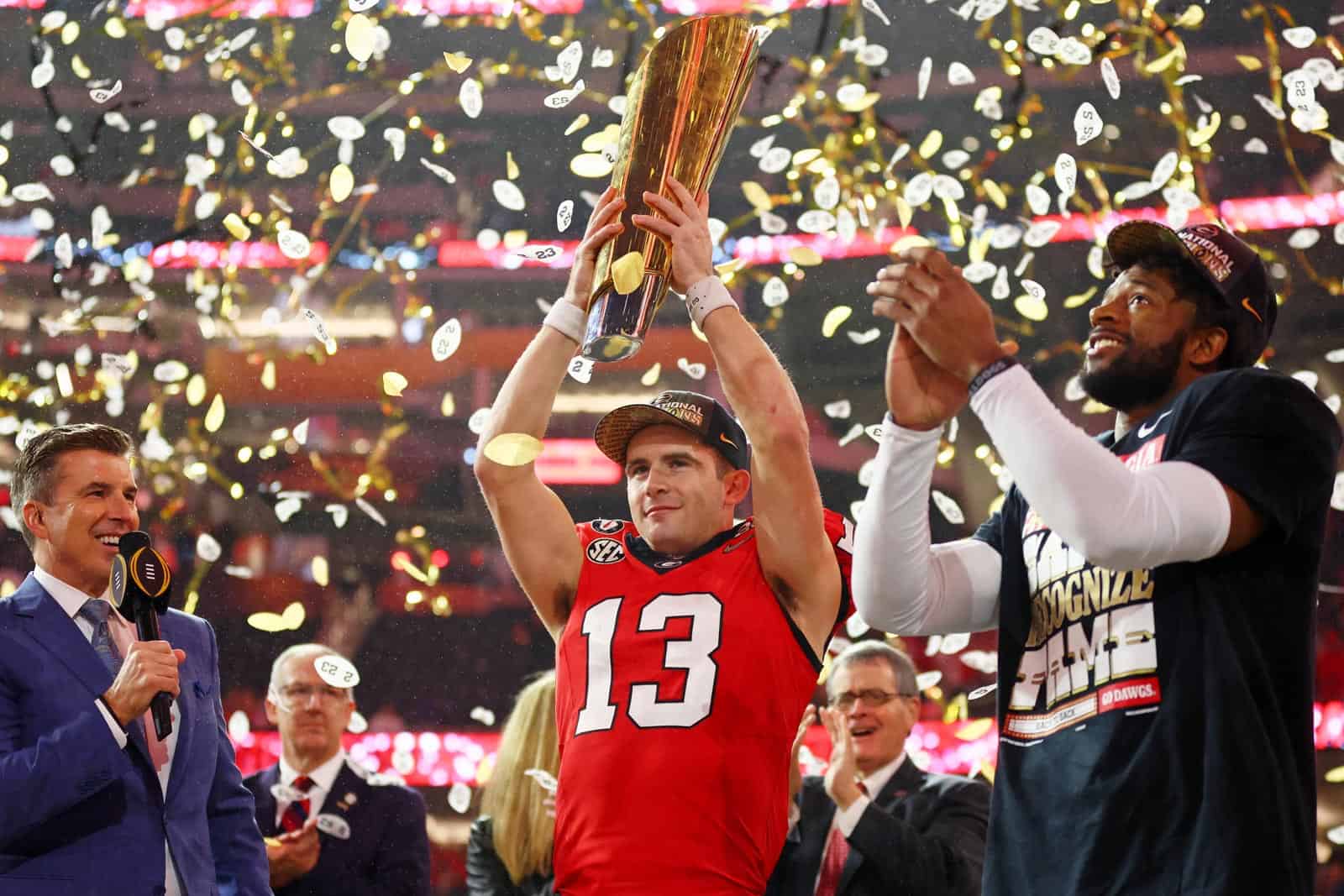 INGLEWOOD, Calif. – The No. 1 Georgia Bulldogs scored on their first six possessions, led by 31 at the half, and cruised to a 65-7 win over No. 3 TCU Monday night at SoFi Stadium to capture their second straight national championship.

Unlike last season’s National Championship Game, in which the Bulldogs needed to rally to beat Alabama, Georgia jumped on the Horned Frogs from the outset. The lead was 17-7 after the first quarter and 38-7 at halftime, as quarterback Stetson Bennett and the offense started hot and stayed hot, and the defense produced its own dominating performance that included three first-half turnovers.

Georgia is the first team in the College Football Playoff era to win back-to-back national championships. The victory was the 17th in a row for the Bulldogs, tying the school record set during the 1945-47 seasons.

Bennett was named the Offensive MVP after throwing for 304 yards and four touchdowns and rushing for two scores. It was Bennett’s fourth Offensive MVP award in four career CFP games.

Safety Javon Bullard was named the Defensive MVP after picking off a pair of passes and recovering a fumble, all in the first half. The defense finished with nine tackles for loss and five sacks.

After Georgia’s defense opened the game with a quick stop, the offense hit a couple of big plays before Bennett ran the ball in for a 21-yard touchdown and a 7-0 lead with 11:01 left in the first quarter. Earlier in the drive, Bennett hit Bowers for 21 and 12 yards on consecutive plays to move deep into Horned Frogs territory.

Georgia’s defense gave the offense the ball back at the TCU after safety Christopher Smith forced a fumble and Bullard recovered at the 33. After a Bowers 5-yard run and a 15-yard Bennett completion to Ladd McConkey, the drive stalled and Jack Podlesny kicked a 24-yard field goal to make it 10-0 Bulldogs with 6:51 remaining in the first.

TCU’s high-powered offense connected on its first big play soon after, a 60-yard completion down to the Georgia 11. Three plays later, quarterback Max Duggan, a Heisman Trophy finalist like Bennett, ran the ball in from the 2 to make it 10-7 with 4:45 remaining in the quarter.

Georgia wasted no time answered with another touchdown. Bennett and McConkey twice connected on 11-yard receptions, with an 11-yard Kenny McIntosh run in between before Bennett hit a wide open McConkey in the end zone for a 37-yard score, pushing the lead to 17-7 with 2:39 remaining in a busy opening quarter.

The Bulldogs put together a dynamic 92-yard drive on their next possession, mixing the run and pass effectively as they marched in for another touchdown. Bowers had receptions of 10 and 35 yards, Bennett scrambled for 12, Daijun Edwards had an 8-yard catch and 7-yard run, McIntosh added a 12-yard run, and then Bennett finished it with a 6-yard touchdown run. Bennett’s 10th rushing touchdown of the season made it 24-7 with 8:30 to play in the half.

Georgia’s defense forced its second turnover of the half on TCU’s next drive, with Bullard picking off a deep Duggan throw at the Bulldog 34. The offense then marched down, again effectively mixing the run and pass, and went up 31-7 on Kendall Milton’s 1-yard plunge with 1:19 left in the half.

Bullard and the defense weren’t done. Bullard intercepted a Duggan pass deep in TCU territory and the offense got the ball back at the 22 with :36 seconds left. On the second play of the drive, Bennett hit Adonai Mitchell for a 22-yard score with 26 seconds left, making it 38-7 at the half.

After punting for the first and only time in the game on their first drive of the second half, the Bulldogs’ offense found the end zone again with their second, with Bennett hitting Bowers for a 22-yard touchdown to make it 45-7 with 10:52 remaining in the third quarter. Bowers had a monster performance with seven receptions for 152 yards, plus two rushes for 15 yards

Georgia made it 52-7 with 2:17 left in the third when Bennett hit McConkey for a 14-yard touchdown. A 1-yard Branson Robinson rushing touchdown pushed Georgia’s lead to 59-7 with 9:24 left. Robinson was the sixth Bulldog to score at least one touchdown in the game, and he added a second score on a 19-yard run with 7:23 remaining, making it 65-7.

Georgia is now 5-0 all-time against TCU, including the 2016 Liberty Bowl at the end of coach Kirby Smart’s first season. The Bulldogs have played in three of the six National Championship Games since then, winning the past two.

*Historic Success: With its 65-7 win over No. 3 TCU, Georgia captured its fourth national championship and became the first team to win back-to-back titles in the CFP era. The only other teams to win two straight titles since 1990 have been Nebraska (1994-95), USC (2003-04) and Alabama (2011-12).
*Georgia secured its 868th all-time win, good for ninth place for Most Wins in FBS history. Georgia began this season 11th, moving past USC and Tenn.
*The 2022 senior class concludes its career with a school record 49-5 mark and two national championships.
*The Bulldogs are one of only three FBS teams in the modern era to finish a season a school record 15-0, joining Clemson (2018) and LSU (2019).
*The Bulldogs have tied the school record for consecutive wins with 17 straight going back to last season’s CFP semifinal/Capital One Orange Bowl win over No. 2 Michigan. From 1945-47, Georgia had a stretch where it won 17 games in a row.
*The Bulldogs are now 5-1 in the CFP under Kirby Smart including 2-1 in CFP National Championship Games.
*With today’s win, Georgia improves to 11-2 all-time as the No. 1 ranked CFP team including 5-0 in 2022-23.
*Georgia improved to 5-0 all-time against TCU including 3-0 in the postseason, winning the 1942 Orange Bowl, the 2016 Liberty Bowl and today’s National Championship Game.

Defense Limits TCU To A TD: Georgia came in ranked second nationally in Scoring Defense, allowing just 12.8 points a game while TCU came in ranked 5th nationally in scoring (41.1). TCU posted just 7 points on 188 yards of total offense on 51 plays.
*Third-ranked TCU became the seventh team this year the Bulldogs held to a season-low in points in a game. Their low was 17 in a win over Texas.
*Sophomore DB Javon Bullard, who was Defensive Player of the Game tonight, was also the Defensive MVP of the CFP semifinal win over Ohio State in the Chick-fil-A Peach Bowl. Tonight, Bullard ccounted for all three turnovers (2 INTs, Fumble Recovery) that led to 17 points.
*The leading tackler was sophomore Smael Mondon with five. Georgia had 5 sacks (freshman Mykel Williams team-best 4.5, freshman Bear Alexander, his 2nd, senior Robert Beal, his 3rd and Tykee Smith-2nd and freshman Jalon Walker-1st.
*Georgia forced a three-and-out on TCU’s first posession, limiting them to three yards. Georgia forced a fumble on the 2nd possession, caused by Chris Smith and recovered by Javon Bullard at the TCU 33. On the 3rd possession, they scored a TD on a 75-yard drive including a 60-yard completion.

Top Targets: The leading receiver was sophomore Brock Bowers (7 rec., 152 yards). It was Bowers’ seventh game of 100+yards receiving, while Ladd McConkey was next with five receptions for 88 yards including a 37-yard TD and a 14-yard TD. Georgia had its fourth drive of 90+ yards on the year, going 92 yards on 11 plays in 5:43 capped by a Bennett six-yard score for a 24-7 lead.
*On the team’s first drive, Bennett directed a 57-yard TD drive on five plays in 2:58 capped by a 21-yard TD scamper by Bennett, his 9th rushing TD of the year. It gave Georgia 7-0 lead with 11:01 left in the first.
*Bennett to Bowers connected for a 22-yard score for a 45-7 lead with 10:52 in the 3rd. The second possession of the second half resulted in another TD, going 84 yards on nine plays capped by a 14-yard catch to McConkey to make it 52-7.
*In the rushing attack, senior Kenny McIntosh had a team-high 50 yards on six carries while junior Kendall Milton had 33 yards and 10 carries, 1 TD. Milton notched the team’s third rushing TD of the night while freshman Branson Robinson had two as the Bulldogs had a school record 44 on the year.

Special Teams Summary: Senior PK Jack Podlesny registered 11 points, going 1-for-1 in FG (made 24-yarder) and 8-for-9 in PATs. He is 26-for-31 in FGs this year. He handled kickoffs too. Georgia did not punt in the 1st half but opened the 3rd with a punt by freshman Brett Thorson (48 yards).

Points Off Turnovers: Georgia came in minus one in Turnover Margin on the year and forced three turnovers in the first half. The Bulldogs forced a fumble in the first quarter (by Chris Smith, recovered by Javon Bullard), and it led to a field goal and a 10-0 lead with 6:51 left. Bullard notched his first career INT. Georgia took over at its own 34 and it led to a TD. Bullard notched his 2nd career INT at the TCU22 with 36 seconds left in the half. It led to
a TD and a 38-7 lead with 26 seconds left. Georgia scored 71 points of 19 turnovers this year.

Captains, Coin Toss and For Starters: Seniors Nolan Smith (OLB), Chris Smith (FS) and Stetson Bennett (QB) along with redshirt sophomore Sedrick Van Pran (C) served as the captains with Matt Stafford (QB-L.A. Rams; UGA ’06-’08) the honorary Bulldog captain. Georgia won the toss and elected to defer the ball until the second half. Sophomore Amarius Mims (RT) made his second straight start in place of junior Warren McClendon who had started 37 consecutive games, the longest streak on the team, before missing the CFP semifinal at the Chick-fil-A Bowl due to injury. These are Mims’ first two career starts.