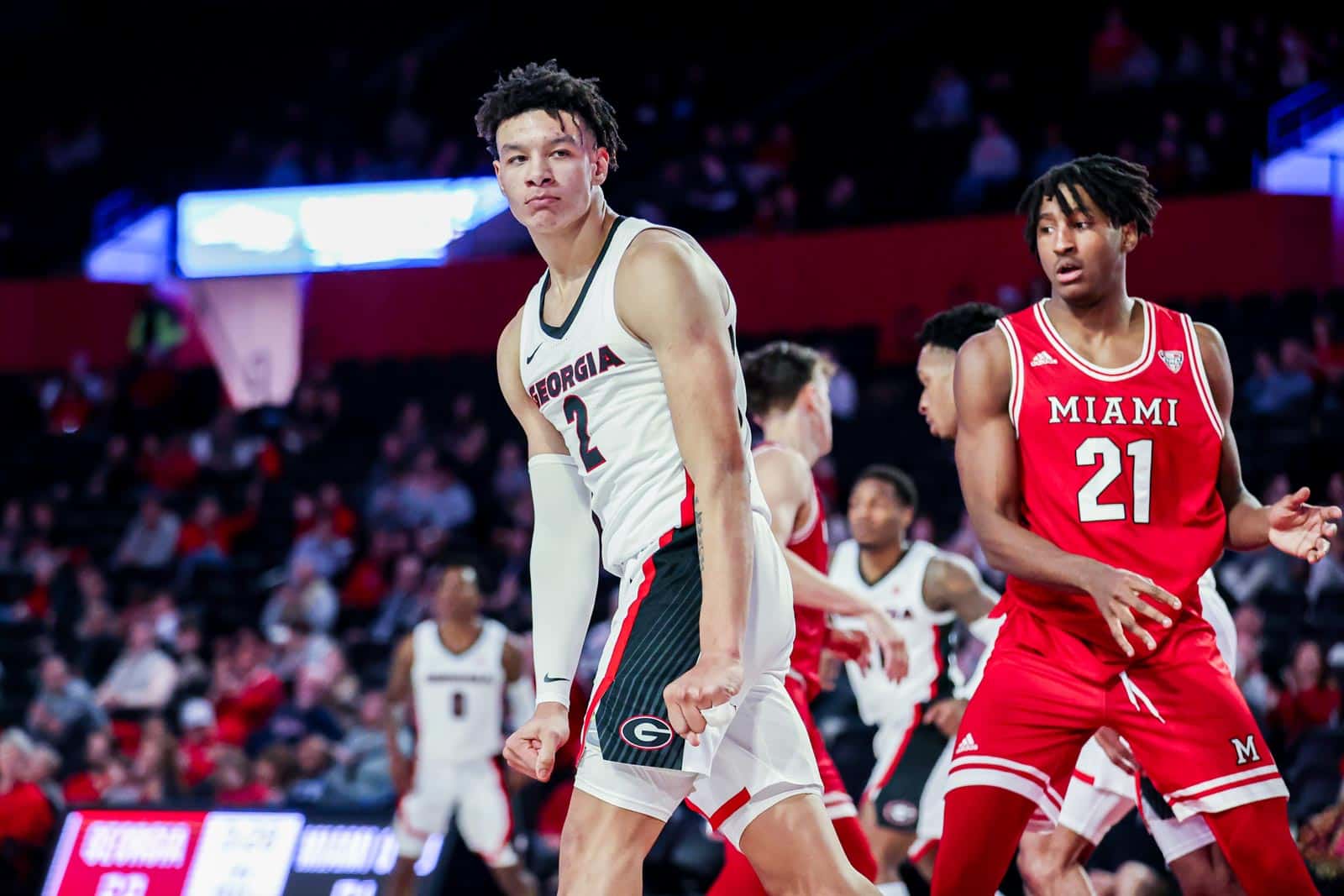 ATHENS, Ga. — Freshman KyeRon Lindsay recorded 14 points and 10 rebounds in the Georgia Bulldogs’ 77-70 victory over the Miami (Ohio) RedHawks at Stegeman Coliseum on Monday evening, notching his first collegiate double-double and becoming the third Southeastern Conference freshman this season to achieve the mark.

Terry Roberts paced Georgia (2-1) offensively with 22 points, adding four rebounds and three assists. Justin Hill added 12 points for the Bulldogs in just 18 minutes off the bench. Miami’s (1-2) Mekhi Lairy led the game in scoring with 34, making all 10 of his free throws and going 9-of-17 from the field.

“It wasn’t pretty, but we’ll take the win instead of the alternative,” said head coach Mike White. “Obviously, it beats the alternative. We have a lot to learn and a lot of room for growth. I thought at times, especially in the first 10 or 12 minutes of the game or so, we were playing pretty good basketball. Adversity hit, and we didn’t handle it really well. Credit to Miami of Ohio, Travis (Steele), and his staff. I thought those guys executed well.”

Georgia opened the first three minutes of the game strongly on both sides of the ball, running up a 10-0 lead with a pair of three-pointers and a trio of turnovers to force a Miami timeout. The team seemed to be in sync both offensively and defensively through the under-12 media timeout, with all six of the Bulldogs’ field goals coming off assists and forcing seven turnovers from the RedHawks.

The Red and Black rode its hot hand from deep and cruised out to a 29-15 lead with five to go in the half, connecting on 5-of-10 threes, two coming from Mardrez McBride. However, Miami managed to force a turnover after making a layup and hitting a long ball of their own, forcing White to take his first timeout of the half.

The RedHawks continued to apply the pressure, making attempts from deep to cut the lead and creating timely turnovers, continuing to chip away at the score differential. While Georgia still held a lead when the teams went to the locker rooms for halftime, Miami shrunk what was a 17-point advantage to just 10, 38-28.

The story of the second half for Georgia was turnovers, as it gave the ball away eight times through the 10-minute mark and finished the half with 12. Miami used these free possessions to create 11 points.

UM kept sinking key in the three-pointers after missed shots in the second half, eventually forcing a Georgia timeout after Lairy sank his fourth of the evening, cutting the lead to seven, 49-42, with 12:48 to go in the contest. After UGA ended the first half going 6-of-13 from three-point range, it would go on to shoot 1-of-10 from beyond the arc in the second half.

Out of the timeout, an errant pass from the out-of-bounds play landed right into the arms of Lairy as the fifth year cut the Georgia advantage down to five and then took a charge to get his team the ball back. This marked the fifth turnover for UGA in just over seven minutes and the team went on to finish the second half with 12. A cross-court pass from Lairy led to another make from deep, putting the score at 49-47 at the under-12 media timeout.

Georgia felt in control for the most part down the stretch, eventually converting its lead to double figures once again. However, Miami suddenly found a chance to cut the lead to one with under a minute to go, down just four points after Hill split his trips at the charity stripe. RedHawks’ big man Anderson Mirambeaux put up a three that went just off the rim, eventually confirming the Bulldog win, 77-70.

Georgia will next hit the hardwood this coming Friday against the Bucknell Bison at Stegeman Coliseum at 7 p.m. ET. The game will be broadcasted on SEC Network. This will mark the first meeting between the two programs in 21 years, when the Bulldogs claimed a 93-90 win on Dec. 1, 1991. UGA holds a 2-0 all-time series record against Bucknell.

• Bulldog Bandits – The Bulldogs have recorded 7+ steals in three straight games to start season for first time since 2019-20.

• Tough Competition – Mekhi Lairy’s 34 points are the most for opposing player against Georgia since 37 by Georgia Tech’s Michael Devoe last season.

Opening statement…
“It wasn’t pretty, but we’ll take a ‘W’. Obviously, it beats the alternative. We have a lot to learn and a lot of room for growth. I thought at times, especially in the first 10 or 12 minutes of the game or so, we were playing pretty good basketball. Adversity hit, and we didn’t handle it really well. Credit to Miami of Ohio, Travis (Steele), and his staff. I thought those guys executed well. Lairy is terrific. Wow! Comes in here and gets 34 on the road in the SEC, 4-of-7 from three. The big fella is a load. They run good stuff, and we didn’t do a good enough job on Lairy. Of course, have to do a better job of that on high-level guards. I thought we played emotional. That’s what I talked about on the radio. We just made some erratic offensive plays and some erratic defensive decisions. Even when we were playing really hard defensively, we had some communication miscues really all the way to the end. They had an open three late where we switched, but we don’t yell switch. We had two on the ball, and we had a switching lineup out there. Details are really important for this team as we grow, and emotions are very important as well. We had a couple jump pass turnovers. Then, we just try and hit a home run and come off the floor and try and do stuff that we don’t practice. We just have to be more disciplined. Our attention to detail has to continue to grow both offensively and defensively. That said, our defensive lineup down the stretch did enough, got a couple tips and defensive rebounds led by KyeRon (Lindsay). Of course, he was also terrific on the offensive glass. We grinded one out.”

On Terry Roberts and KyeRon Lindsay’s play in the second half…
“Terry (Roberts) did a good job in space, using some ball screens and rejecting some ball screens, getting out in transition a little bit. Terry is a high-level competitor. He’s still learning, and it’s going to take time of course to learn how to be even-keel and consistent at this level. He has a chance to be very good. KyeRon, as we told the team in the locker room after the game, gets 14 and 10, and we didn’t run a play for him. He was as excited about holding seals, getting to the offensive glass, and getting stops as he was when he scored. That’s basketball character right there for an eighteen-year-old. Those are positives for sure.”

On the players finding their roles on the team …
“He’s elevated it once games have started. We’ve got two or three guys that play with contagious energy in practice every day. Ky’s become one of those guys in here in games, very early in his career. He had a good game, and this is what? Game three. So, hope he has a good game in game four and five. He’s got so far to go. If he does this consistently, then you’re talking about a guy who has got a chance to be really good but it’s so early in his career. He certainly got us going, as did Terry. Justin Hill, I thought he made some plays too with some confidence and drew some fouls. On the whole again, I thought he plays as hard as anybody on this team, as does M-A Moncrieffe. We’re missing him of course, but when Juice (Jusaun Holt) is on the floor as long as he’s playing within himself defensively and we’re making sound, solid decisions, and we’re not fouling. We’re not gambling and reaching; he plays with some defensive line. He’s a good defensive piece. I thought he played well. He played within himself offensively today too, as much as he has. He attacked to close out and got a layup on and KyeRon Lindsay sealed a big three for us. He just didn’t try to do too much. We keep talking to this team as we’re trying to define roles over time. We wanted to give everybody an opportunity, of course, and now it’s time. It’s the season. It’s not the preseason. We’ve got to figure out who we want to dribble, who we want to shoot, when and where, who we want to post up, and who our best lineups are at what times offensively and defensively. I think Jusaun looked more settled in offensively to complement his defensive energy.”

On 3-point shooting and what was working during tonight’s game…
“I thought we had some decent looks. We had some offensive rebounds that should be kickouts that weren’t, that turned into ‘F’ shots. We have to learn that we can get a really hard offensive rebound and that doesn’t give us a license just to go shoot a bad one that’s contested. You like the effort to get those extra possessions, but you don’t want to throw away that extra possession that you just earned. I thought we got a little tight. I didn’t like us walking to huddles, walking to timeouts. We looked like a team that was second-guessing ourselves a little bit and that’s natural, that’s expected. We haven’t experienced success. We have got a ways to go to do that consistently. We got a lot of looking around wondering who is going to make that next play. Fortunately, we talked about Juice’s three ball. I thought that was a timely one for us. KyeRon Lindsay had some timely offense rebound putbacks that settled us in a little bit. Again, those two-point guards I thought played with a little bit of swagger, like I belong there, I’m going to go make a play, the right play in Roberts and Justin Hill. We’ll continue to improve. I’ll be surprised if we don’t, these guys work. They really work in practice.”

On teammate KyeRon Lindsay…
“KyeRon played great. He did all of the little things that we preach every day in practice. He had an outstanding game. I can’t believe he’s a freshman. He plays like he’s been here before and I’m very proud of him.”

On building team chemistry…
“I feel like it’s coming game by game, practice by practice. We’re beginning to feel out each other and I’m liking the way it’s looking. We’re going to be strong.”

On helping overcome 4-point lead…
“Just taking it play by play and doing whatever coach tells us to do. Execute, and we did just that. My teammates helped me a lot. KyeRon played hard, and we got better.”

On his double-double performance…
“It felt good. I didn’t really realize I was doing the most, but Coach kept me in, and my players got me the ball. We were just running good offense, and it just happened. I was just hooping.”

On closing out the game…
“Stay poised. Coming out at halftime, Coach Mike (White) just said, ‘We have to stay poised and disciplined and take care of the ball.’ That’s what I think we did coming into the game—not fouling and putting them on the line. I think we executed that pretty well.”

On his confidence…
“I feel comfortable every day. I’m a little nervous because it’s a first game every day I feel like. Once I step on the court, I feel fine. My teammates talk to me like I’ve been there for three years, so it helps me out a lot.”