Bulldogs cruise past Ducks in 2022 Kickoff

Bulldogs cruise past Ducks in 2022 Kickoff 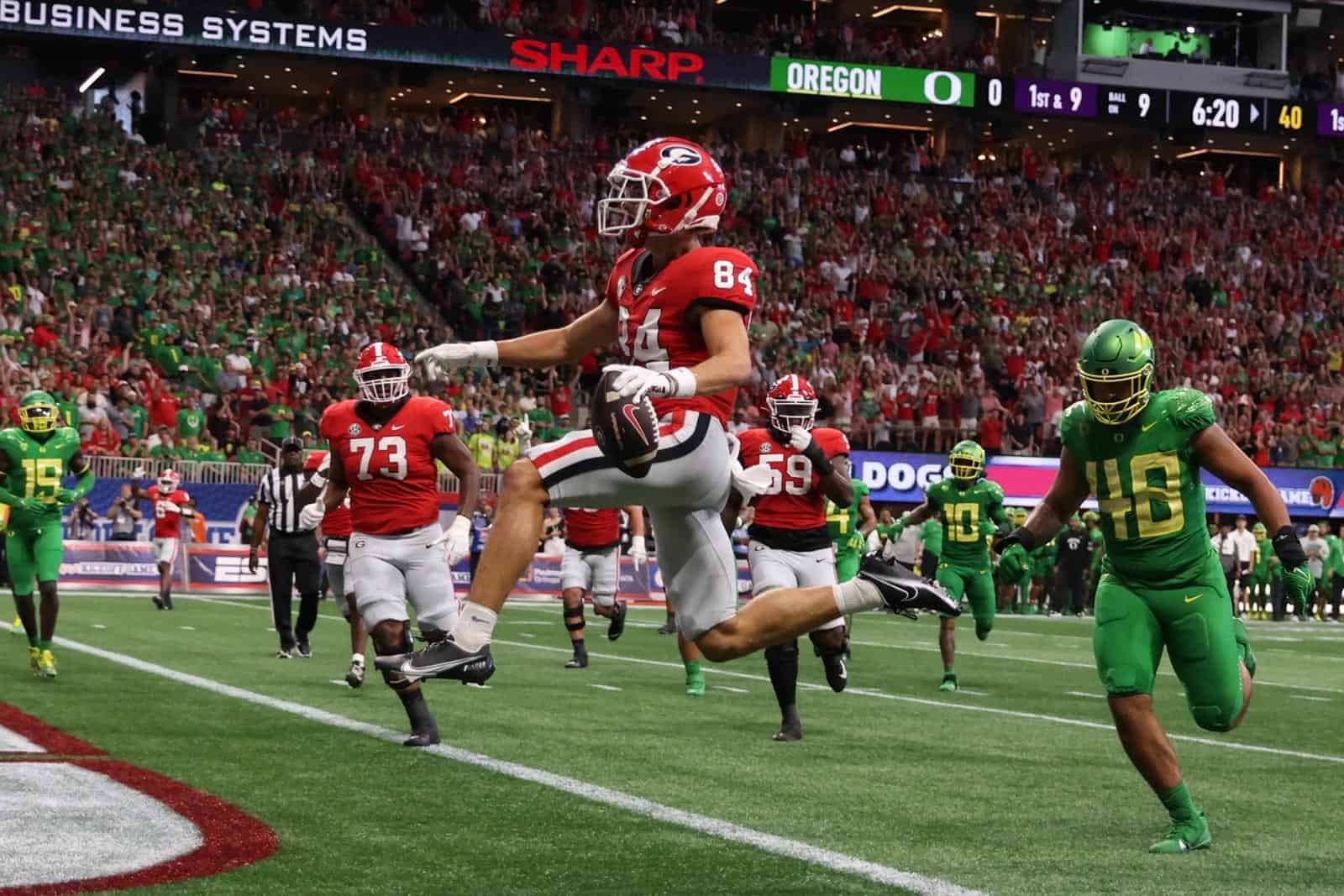 ATLANTA, Ga. — The third-ranked Georgia Bulldogs opened the 2022 season with a 49-3 victory over the 11th-ranked Oregon Ducks in the Chick-fil-A Kickoff game in front of a record 76,490 fans at Mercedes-Benz Stadium and an ABC nationally televised audience on Saturday evening.

With the win, Georgia improves to 99-27-3 in season openers, including 7-0 under head coach Kirby Smart. The Bulldogs move to 2-0 all time versus the Ducks.

Senior quarterback Stetson Bennett began his second season under center for the Bulldogs (1-0) with a 25-of-31 passing performance for 368 yards and two touchdowns. As a team, the Bulldogs ran for 132 yards on 25 attempts.

The Georgia defense stood tall, holding Oregon out of the endzone and allowing 313 total yards of offense. The Bulldogs were especially impressive on third down, with the Ducks (0-1) only converting on 7-of-15 opportunities.

After winning the coin toss and deferring the option to the second half, the Bulldogs forced the Ducks to punt on their opening drive. Georgia responded with a 12-play, 85-yard drive capped off by a nine-yard end-around touchdown by McConkey.

On the ensuing Oregon drive, quarterback Bo Nix was picked off by Starks, thanks to an acrobatic effort. The Bulldogs capitalized on the turnover with a seven play, 92-yard drive and resulting in a Bennett one-yard touchdown run.

Moments later, C. Smith logged the defenses second takeaway on another Nix interception. This marks C. Smith’s second season opening game with an interception – a 74-yard pick-six against No. 3 Clemson in 2021. The Bulldogs again took advantage of the Oregon turnover, scoring on a McIntosh one-yard touchdown run to take a 21-0 lead in the second quarter.

The Ducks responded with a promising drive, but the Bulldogs held Oregon to a 35-yard field goal. Georgia answered with an eight-play, 75-yard drive, where Bennett improvised and found a wide-open McConkey for a four-yard touchdown pass to give the Bulldogs a 28-3 lead heading into the half.

Georgia opened the second half with a six-play, 64-yard drive that resulted in a Kendall Milton 14-yard rushing touchdown to take a 35-3 advantage. The Bulldogs continued their offensive dominance with a nine-play, 75-yard drive, capped off by a 18-yard AD Mitchell touchdown catch. Georgia went on to win 49-3.

Georgia will play host to Sanford (1-0) next Saturday at 4:00 p.m. at Dooley Field at Sanford Stadium. The game will broadcast on SEC Network.

Impressive Season Opener/Series History: With today’s 49-3 victory over No. 11 Oregon, third-ranked Georgia improves to 99-27-3 in season openers including winning its last nine dating back to a 45-21 over Clemson in Athens in 2014. In the Kirby Smart era, Georgia is now 7-0 in season openers. Under Smart, Georgia came in averaging 31 points a game in openers (186 points/6g) while it surrendered just 8.8 (53 points/6g).

Today’s 49 points was the most in a season opener under Smart, and the most since 2015 (51-14 over La.-Monroe in Athens). Also, today marked the second straight opener when the Bulldogs held their ranked opponent to only three points (No. 3 Clemson in Charlotte, N.C.). This was the third neutral site opener under Smart, and he’s now 3-0 (2-0 in Atlanta/Chick-fil-A Kickoff Classic and 1-0 in Charlotte, N.C.). In the series history with Oregon, the Bulldogs are now 2-0 including winning a 1977 contest in Athens (27-16). With today’s win, Georgia is now 26-12 in top 25 matchups (11-7 at neutral sites) under Smart.

Strong Defensive Showing: Georgia limited the No. 11 Ducks to three points on the day including a goal-line stand with less than two minutes left in the contest. For the day, Oregon ran 68 plays and had 313 yards of total offense. In the first half, the Bulldogs built a 28-3 advantage as the Ducks ran 36 plays for 183 yards of total offense (41-rushing, 142-passing).

Freshman Malaki Starks notched his first career interception (snagging it while falling backwards at the UGA8) and finished with a team-best eight tackles. It led to a 92-yard touchdown drive and a 14-0 advantage. Senior Christopher Smith snagged his fourth career INT, and he returned this one for 24 yards to the UGA 44. It led to a TD and a 21-0 lead. Georgia registered 16 INTs last year.

Offensive Leaders: Senior QB Stetson Bennett (25-for-31, career-high 368 yards, 2 TDs plus 1 Rushing TD) in three-plus quarters while improving to 15-3 as a starter as the Bulldogs racked up 571 yards of total offense on 62 plays. He concluded his seventh and final scoring drive with 5:20 left in the third quarter to put the Bulldogs in front 42-3. For the game, the Bulldogs were 8-for-8 on 3rd down with him at the helm.  Georgia was 6-for-6 in the Red Zone, scoring six TDs. Bennett now has five career rushing TDs. RS-sophomore QB Carson Beck took over for Bennett, and he led an 89-yard driver on nine plays in 4:36 including a 3rd-down conversion to make it 9-for-9 for the team on the day. Georgia’s first punt came with 10:19 left in the contest.

The second half started with Bennett directing a six play, 64-yard TD drive in 2:36 for a 35-3 advantage. It was aided by a 36-yard kickoff return by Kearis Jackson. Sophomore wideout Ladd McConkey (5 rec., 73 yards 1 TD plus 2 rushes, 16 yards, 1 TD)notched his second career rushing TD with a 9-yard scamper to cap a 12-play 85-yard drive in 4:57 for a 7-0 lead in the first quarter. Georgia’s second score came on a 7-play, 92-yard drive in 3:37 for a 14-0 edge early in the second quarter. Bennett’s one-yard rush finished the drive. Today was the first time since Vanderbilt last year that he had a rushing and receiving TD in the same game. McConkey’s rushing TD versus the Commodores last year covered 24 yards.

RB & TE Production: Senior Kenny McIntosh (5 rushes, 18 yards, 1 TD and Career-high 9 rec., 117 yards) notched his sixth career rushing TD, a one-yarder to put the Bulldogs up 21-0 midway through the second quarter. It capped a six play, 56-yard drive in 3:46. His previous best receiving was 3-for-37 yards. The leading rusher today was junior Kendall Milton with 50 yards on eight carries and one TD that covered 12 yards and an 18-yard receiving TD (first of his career). Sophomore TE Brock Bowers had two receptions for 38 yards while junior TE Darnell Washington tallied two for 33.

Points Off Turnovers: In the first half, Georgia converted two interceptions into 14 points. The INTs came from freshman Malaki Starks and senior Christopher Smith. Last season, Georgia was +4 in Turnover Margin and scored 94 points off 21 turnovers.