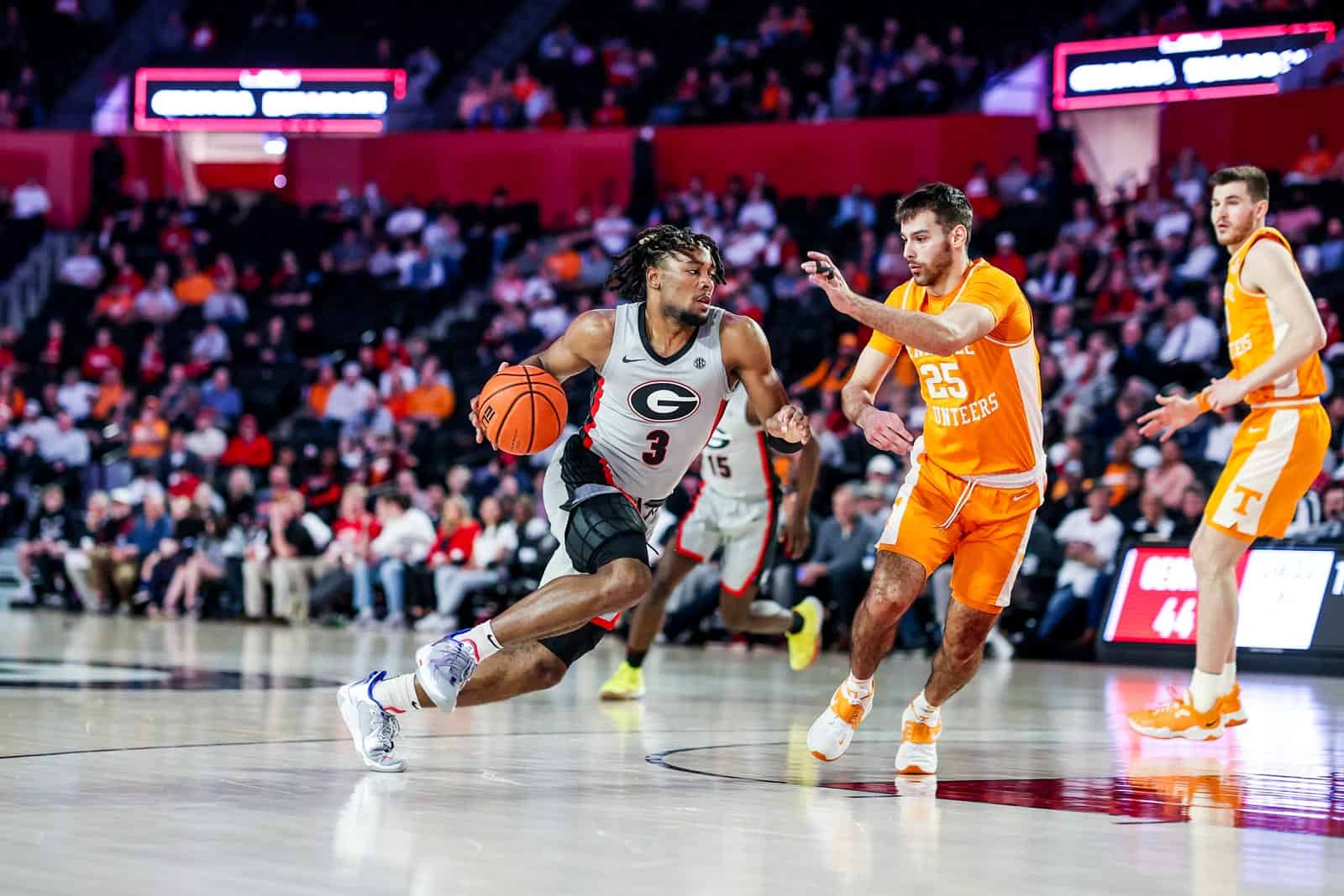 ATHENS, Ga. – In the final home contest of the season, the University of Georgia men’s basketball team fell to No. 13 Tennessee, 75-68, Tuesday evening before 6,139 spectators at Stegeman Coliseum.

Graduate Aaron Cook led Georgia (6-24, 1-16 SEC) in scoring with 17 points, along with four assists and three steals. Sophomore Kario Oquendo tallied 16 points, while redshirt senior Braelen Bridges posted 12 points on 6-for-7 shooting. For the game, the Bulldogs shot 44.8 percent from the field.

Tennessee (21-7, 13-4 SEC) built an early lead with its outside shooting, connecting on four 3-pointers in the first seven minutes. After going down by six, Georgia responded with a quick 7-0 run to move back in front at 12-11 and continued to answer the Volunteers as the period neared its halfway mark. The Bulldogs eventually retook the lead with eight straight points, highlighted by an incredible dunk from Oquendo to make it 24-18.

Unfortunately for Georgia, the six-point lead proved to be short-lived as Tennessee unfurled a 10-3 run to lead 28-27 with three minutes to play. Tough makes from Bridges in the paint, along with a three from junior Jaxon Etter, helped the Bulldogs keep pace as the teams went to the locker room tied at 35.

As the second half began, Oquendo took command of the Georgia attack, scoring eight of the Bulldogs’ first nine points. Tennessee’s scoring picked up in the same span as junior Josiah-Jordan James netted eight consecutive points to put the Volunteers up five by the first media break. Powered by its strong shooting, the Tennessee lead soon ballooned to 15 with under 10 minutes to play.

Now facing their largest deficit of the evening, the Bulldogs worked to move back into single digits via an 11-0 run spurred by Cook. After a Dalen Ridgnal jumper made the score 64-60 with six minutes left, the Volunteers broke their five-minute scoring drought with a John Fulkerson jumper. The scoring was limited for both teams in the closing minutes with Cook’s layup keeping the Bulldogs within six heading into the final 60 seconds. However, Tennessee was able to seal the game at the foul line.

Georgia closes its regular season this weekend with a trip to Missouri on Saturday, March 5. The matchup with the Tigers is set for a 3:30 p.m. tip and will air on SEC Network.

• Tonight’s game marks the 159th meeting between the Bulldogs and Volunteers – Tennessee leads Georgia 98-61 in the series.

• Super Kario II – Sophomore Kario Oquendo logged his 21st double-digit performance, including his 14th in conference play and 11th in a row.

• Mr. Automatic – Redshirt-senior Braelen Bridges recorded his 23rd double-digit performance of the season, including his 14th in league play. The Atlanta, Ga., native finished the game with 12 points, shooting 6-7, moving his season field goal percentage to .64347 – becoming the Bulldogs’ single-season field goal percentage leader by the slimest of margins over Lavon Mercer (.64317 in 1979). Tonight marked the 14th game that the redshirt senior finished with a 70% or higher shooting percentage.

• Cookin’ on Senior Night – Graduate Aaron Cook led the Bulldogs in points tonight for the sixth time this season with 17 and tallied his 200th career steal. With four assists today, Cook remains in third place all-time on the UGA single-season assists rankings. Cook is nine shy of the No. 2 total of 169 by Pertha Robinson in 1995.

• The Wright Pass – Freshman Christian Wright led Georgia in assists for the fifth time this season. He finished the game with five, which ties a career high.

• On the Glass – Junior Jaxon Etter led the Bulldogs in rebounds for the first time this season with five.

Opening Statement…
“As I said to the team, I look at the stat sheet, and I don’t know what to tell them on where we lost the game. They fought their butts off. I mean, they just, they fought, they believed, they didn’t flinch. We played a great team. There’s definitely some teams in this league that can win a National Championship. Tennessee is certainly one of them. Rick Barnes, I have no idea — maybe he hasn’t qualified yet years-wise, I’m not sure — but I have no idea why he hasn’t been bandied about as being a Naismith Hall of Famer, I have no idea. Because he’s that good, and he’s been that good everywhere.

They have a tremendous team. They have an older team. They have a fast team that’s good in the backcourt. They’ve got a strong and really athletic team that’s good up front, and our guys went toe to toe and battled them. I think at the end of the day they just need a few more shots. We missed a couple of layups. There were a couple of swings. Christian’s missed layup, and he was so open, probably more open than he thought he’d be. So, we miss a layup and give up a three on the other end, that’s a five-point swing. Those things are tough. There’s segments of the game that you can look back at that really at the end they just made a couple more plays, a couple more shots than we did. Jaxon’s three goes down off Aaron’s steal, and it’s bedlam, but that didn’t happen.

This team prepares and practices their butts off. So, the way they played tonight is indicative of the way they train. So go ahead.”

On his team’s effort…
“I think the bottom line is I never walk in here coaching like a 1-13, and I don’t prepare that way. I left here Saturday night maybe 11:00, 11:30 after a noon game, just digging in anything we could find for Tennessee. I think what these players do is they respond to that. They respond to game planning. They respond to the work. There’s an inner pride, which we’re preaching all the time, that control what you can control, and you can absolutely control your effort. You can absolutely control — you can’t necessarily make the shot go in or make the shot not go in on the other end, but you really can control your execution. And you can control how hard you fight, how tough you are. And that’s what we’re building day after day. I wouldn’t tolerate it any other way because I certainly wouldn’t tolerate it from me, so I certainly wouldn’t tolerate it from anyone else because that’s not how you grow in life. How you grow in life is you take a look at adversity, and either it softens you up or it hardens you up. There’s no middle ground. We’ve just got to continue to do that, and that’s what I expect them to continue to do. That’s all I do, and that’s all I’ve ever done, and that’s all I will ever do. So, having a group of people that will continue to bring it — it’s not easy. I’m not saying it’s easy, and I’m not saying we always have a belief because it’s very, very hard. They’re young kids that really want to win. I mean, they really, really want to win. There would be a huge difference if they were accepting losing, and they’re not. They’re not. I sure as heck am not, and they are. I’m really proud of the way that they fight and get better every day.”

On Kario Oquendo…
“I’m not sure. He wasn’t out very long. I don’t know if it was the stomach, got the air knocked out of him. I didn’t get a read. I was going to give him a blow quickly anyways. He played his tail off. He really did. He’s getting so much better. He’s blowing up in front of everybody’s eyes. I mean, he really is. We have a lot of guys getting better in here, but he’s really, really elevating his game. He played a really long stretch at the beginning. Christian played a long stretch at the beginning. Probably longer than we would have wanted, but it is what it is. Kario, I think, responded pretty well.”

On not giving up…
“I think we just came out with a lot of energy and came out ready to play. We executed on offense. Not so much in the first half, but later on in the game, we started getting stops and capitalizing off of stops. That really helped in keeping us close in the game after they got on a couple of runs.”

On going toe-to-toe with Tennessee…
“This is a tough team. With all the stuff that’s been going on outside of basketball, I can’t complain with how we’re coming together and trying to find a way to make it work. All we can do is keep pushing forward, keep trying to win games. Hopefully, we can get a win this Saturday.”

On his experiences with teams getting cold…
“I can’t say I’ve been a part of where it’s been kind of back-to-back like that. Like I said, we’re doing everything that we can to fight and win games. Sometimes it doesn’t roll our way. Calls don’t go our way or shots not falling. Things that we can’t control, we can’t get down about. All we can do is control what we can control and keep fighting to improve on those things that we can control.”