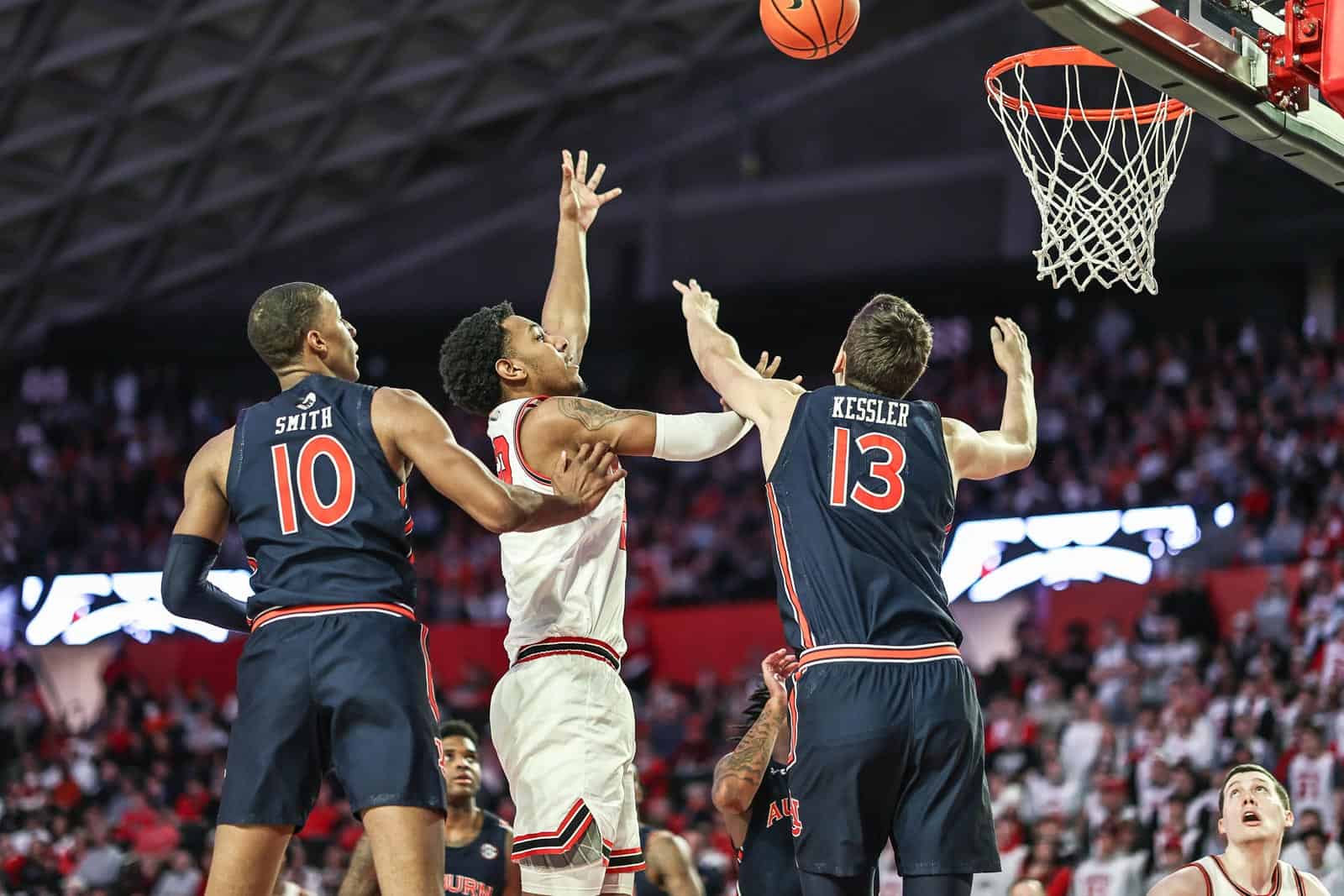 ATHENS, Ga. – Propelled by a furious second-half comeback, the University of Georgia men’s basketball team fell to No. 1 Auburn, 74-72, in a thriller before a season-best 10,523 spectators Saturday afternoon at Stegeman Coliseum.

Sophomore Kario Oquendo led Georgia (6-17, 1-9 SEC) with 25 points on 9-for-18 shooting, along with five rebounds and four steals. Senior Braelen Bridges tallied 14 points and a team-high seven rebounds, while junior Jaxon Etter pitched in with 13 points on 5-for-6 shooting. Graduate Aaron Cook nearly reached a double-double with 10 points and nine assists. For the afternoon, the Bulldogs shot 40.7 percent from the field, raising the clip to 58.1 percent in the second half.

Both teams found success from beyond the arc in the opening minutes, but Auburn (22-1, 10-0 SEC) used its inside game to build a 19-9 lead by the under-12 timeout. As the Bulldogs looked to keep up, the Tigers continued building on their lead with an 8-2 run, capped off by a fast break dunk from junior Devan Cambridge.

While Georgia’s offense struggled, Oquendo was able to find points at the foul line, quickly moving the Bulldogs into the bonus and narrowing the margin to nine with four minutes to play. The Tigers quickly responded with an 8-2 run powered by sophomore guard K.D. Johnson.

Once again utilizing the line, Georgia scored five straight as the teams headed to the locker room with Auburn leading 42-30 – for the half, 53 percent of the Bulldogs’ points came from free throws.

As the second half started, two quick Georgia baskets brought the Auburn lead to eight, but it was just the beginning of a Bulldog rally. Taking advantage of the Tigers’ poor shooting, the Bulldogs rattled off 11 unanswered points to make it 48-47, featuring a thunderous windmill dunk from Oquendo and a wide-open three from Etter that electrified the Stegeman crowd.

Led by Oquendo, the Bulldogs continued to battle back, eventually tying the contest with a corner three from senior Noah Baumann before taking the lead on a foul make from sophomore Jabri Abdur-Rahim. Coming out of the under-eight timeout, a quick 6-0 run gave the lead back to Auburn, but Georgia again tied the game with four minutes to play, moving back in front on an Oquendo jumper.

As the game wore down, Etter kept the Bulldogs ahead with back-to-back layups, but Auburn answered both times at the line. With 55 seconds remaining, Cook put Georgia up two as he was fouled, but was unable to convert on the and-one. After Johnson tied the game on the other end, Baumann missed from three, allowing sophomore Wendell Green, Jr. to score the game-winning layup with four seconds left.

On the final possession, Cook was forced to throw up a half-court attempt, but it hit the top of the glass as time expired.

Georgia returns to the road next week as it travels to rival Florida on Wednesday, Feb. 9. The matchup with the Gators tips at 6:30 p.m. and will air on SEC Network.

• Tonight’s game marks the 195th meeting between the Bulldogs and Tigers – Auburn leads Georgia 99-96 in the series.

• Cook’s in the Books – Graduate Aaron Cook dished out nine assists and upped his season total to 133. In the process, Cook joined UGA’s Top-20 season assist leaders. The “super senior” is tied with Gerald Robinson (2011) and Litterial Green (1989) for the No. 17 total. Cook is also six steals shy from his 200th career theft.

• Etter Hits Double Figures – Jaxon Etter notched his second double-figure scoring output this season and of his career with 13 points.

• A Tale of Two Halves – After trailing Auburn by as much as 15 in the first half, Oquendo sparked a Georgia come back that gave the Bulldogs a two-point lead with 55 seconds remaining and a chance at a potential game-winner against the No. 1 team in the country.

Opening Statement…
“I’ll open up. Definitely disappointed for our players, our fans. The disappointed level of the game is one thing, and then after watching the last play where every referee describes to you that if the man is retreating, like Jackson was, and he is outside of the cylinder, that it’s an offensive foul, but our guys competed at a high level. I just saw that clip, so I’m trying to prepare myself mentally. Just saw that before I walked in here. It was a tough way to lose, but at the end of the day our guys played extremely hard. They took what was there, and I’m proud of their effort. Go ahead.”

On the adjustments made at halftime…
“I kept saying throughout the first half, all we’re doing is missing layups. We’re missing layups and close shots. I think I lost count at seven or eight, right? We wanted to drive them, get to the rim. We wanted to reverse the basketball. They’re going to foul you. It’s just going to be a matter if the referees are going to make the call or not, so let’s get in a downhill drive, and we just missed some close shots. At the end of the day, I kept reminding them, they had a chance to grab momentum. They never did, right? They had us down, and we kept coming, and so when you go in at half only down 12, that’s a lifetime. We made a few adjustments on what we wanted to do with where we wanted to attack on the ball screen, how we wanted to get some misdirection drives, things of that nature, control the game more from a play-calling sense. Once we had it in the half court, we wanted to attack their pressure when they came. We wanted to make them move and have to work defensively so we could get our cutting game going and get our driving game going when they were in the half court. Really it was just a matter of I cut the film short and all that kind of stuff, and it just became a matter of us getting back to what our game plan is because we’re still fully in this to make our game plan work.”

On the last four minutes of the game…
“Unfortunately, when you miss a couple of free-throws, that’s tough, right? We’re shooting 81, 80, 82, whatever we’re shooting from the line in the league. You get 29 attempts, that’s pretty good, but we’re usually making more than 20, and we had some tough misses there. Jackson did everything technically perfect on the last play of the game, the last defensive possession of the game, from the way it’s been described to me by every referee. That’s what I have.”

On the improvements on defense…
“It was the togetherness today that just wasn’t there against Arkansas. We moved on a string. We were all in gaps. When one guy drove, you were helping the helper. It was a connectivity that was thriving. Guys were working together. Guys were moving together, and on offense, we had 11 assists and four turnovers in the second half, which changed the game. We were down by 10 in the first half, and when we don’t turn the ball over, we’re a really good basketball team, and it showed in the second half. But defensively, that’s just been preached all year long and today we put it together. Like I said, it really stinks that it didn’t work out for us.”

On the team’s performance…
“I think we played really well this game. Even though we didn’t get the win, this was probably the hardest we have played this season and the best execution that we’ve had. Overall, I can’t be disappointed in our team because we put it all out there, and we lost the game on one play. It sucks that we didn’t get the win, but I think it was the best game we’ve played so far.”

On the team’s ability to stay in games…
“I see this every day. The games where we lost, the games where we won, I feel like every time we step on the court or stepped into practice, it’s just a different feeling that you have like this afternoon when we stepped on the court. I was a different feeling. We felt like we wanted to come out and play. The fans were great.”

On how he played…
“I usually get the most hyped about games like this because everyone’s talking about ‘Oh, they have this. They have that.’ Whenever I get a chance to go against future NBA guys, because I consider myself a future