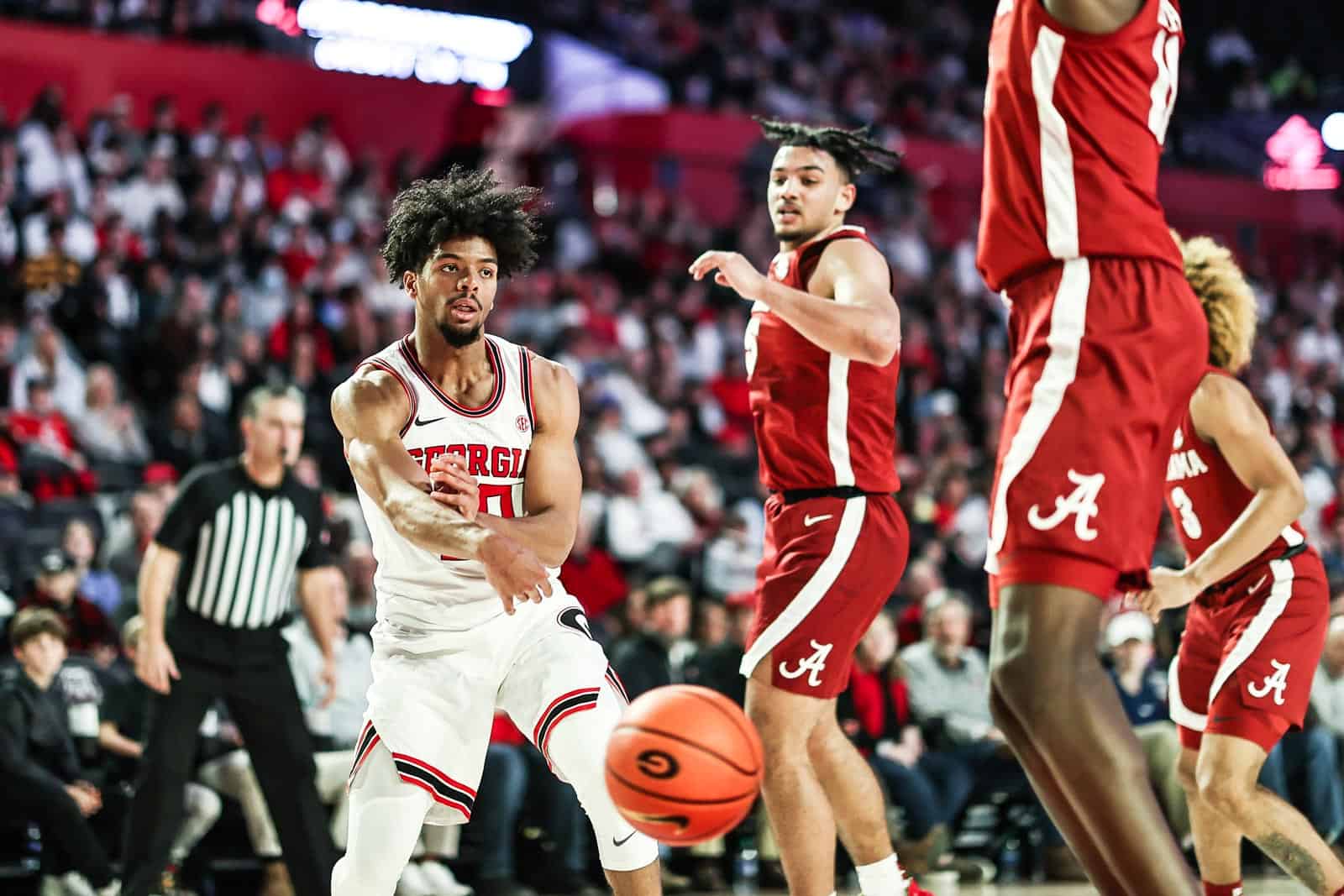 ATHENS, Ga. – Powered by a late rally, the University of Georgia men’s basketball team earned its first conference win of the season with an 82-76 victory over Alabama Tuesday evening before 6,703 spectators at Stegeman Coliseum.

Graduate Aaron Cook led Georgia (6-14, 1-6 SEC) in scoring with 15 points, while senior Braelen Bridges and sophomore Jabri Abdur-Rahim each scored 13. Sophomore Kario Oquendo pitched in with 11 points and a team-high seven rebounds. For the evening, the Bulldogs shot 44.6 percent from the field and led in points off turnovers by a 23-14 margin.

“We came back yesterday. It was phenomenal,” said Georgia head coach Tom Crean following the game. “Nobody is hanging their heads. There’s tremendous energy. They’re buying into the fact that we believe we’re going to win. And tonight, we didn’t see those ghosts that we sometimes see, when things start to go bad for us. And I’m really, really proud of the way they played. But, again, the preparation leading into it, the spirit, the togetherness, those are things that carried us through, and it carried us through the game.”

Georgia started fast as Oquendo scored the first six points before senior Noah Baumann connected on a 3-pointer and junior Dalen Ridgnal slammed down a missed jumper. After Alabama (13-7, 4-4 SEC) moved ahead following the first media break, consecutive threes from Abdur-Rahim and freshman Christian Wright helped the Bulldogs regain the lead halfway through the period. The sharp shooting continued as back-to-back treys from junor Jaxon Etter put the Bulldogs up eight with under eight to play.

Using an 8-0 run, Alabama quickly tied the game, eventually retaking the lead on three-consecutive 3-pointers. As the half wore down, the Crimson Tide added to its advantage with a pair of layups as the Bulldogs found their way to the foul line, culminating in a 42-36 Alabama lead at the half.

After Alabama’s lead reached nine early in the second half, Georgia rattled off a 12-3 lead to knot the game at 48, capped off by a corner three from Cook. The Crimson Tide soon regained the lead thanks to six straight points from senior Keon Ellis, but Oquendo stemmed the tide with an electric baseline dunk. Both teams traded baskets as the game stayed tight heading into the midway mark of the half.

After over three minutes without a bucket, Georgia narrowed the margin to one with just over five to play, followed soon after by three makes at the line from Abdur-Rahim following a foul on a 3-point attempt. Two more makes from the New Jersey native put the Bulldogs back in front, yet the Tide countered with a put-back dunk at the other end.

Benefitting from a pair of key rebounds, Georgia extended its lead to four with 2:22 remaining. Continued success at the line helped the Bulldogs add to the margin, making it 76-70 with just over a minute to play. The Crimson Tide earned an extra trip to the line with a steal off an inbounds pass but missed both free throws. In the closing seconds, Etter sealed the game with a jumper in the paint.

Georgia returns to the road this weekend as it travels to Nashville to face Vanderbilt for the second time this season. The matchup with the Commodores tips off at 6 p.m. EST and will be aired on SEC Network.

• Tonight’s game marks the 151st meeting between the Bulldogs and Crimson Tide – Alabama leads Georgia 98-53 in the series.

• Call on Cook – Graduate Aaron Cook led the Bulldogs in points (15) and assists (4) for the fourth and 17th time this season, respectively.

• Braelen the Beast – Braelen Bridges notched double-digit points for a team-leading 15th time this season and fourth consecutive game. The senior from Atlanta finished the game with 13 points.

• Free for Jabri – Sophomore Jabri Abdur-Rahim shot 10-for-11 from the free throw line. Tonight marks his sixth double figure game of the season and second in SEC play.

• Oquendo on the Glass – Sophomore Kario Oquendo led the Bulldogs in rebounds and tied a career high with seven.

• Taking Advantage of the Charity – Georgia entered the game shooting a league best 82.5 percent from the free throw line as a team in conference play, BUT WAS only 24-for-30 (80 percent) on the night.

Opening Statement
“I’m really proud of these guys and for a lot of reasons. And the staff because we got better between South Carolina and tonight because of the way we prepared and practiced. When I told them you don’t get an edge in the game, right, the momentum is up for grabs in the game and things of that nature, but you don’t gain an edge in the game. You gain an edge from preparation and practice. We came back in, we were in here Sunday night after I got back from Milwaukee, from the Marquette experience, with the hall of fame, and we practiced for about an hour and a half. We came back yesterday. It was phenomenal. We had a solid walk through. Nobody is hanging their heads. There’s tremendous energy. They’re buying into the fact that we believe we’re going to win. And tonight, we didn’t see those ghosts that we sometimes see, when things start to go bad for us. And I’m really, really proud of the way they played. But, again, the preparation leading into it, the spirit, the togetherness, those are things that carried us through, and it carried us through the game. Got a lot of good basketball from a lot of people. But our fans, they were outstanding. And our student section that was there, they were fantastic. And the energy in the building, when we needed them the most, was at the highest level. I’m very, very thankful for that. So, we’ll go from there.”

On his primary emotion after the win…
“I think there’s a lot. I think there’s a lot. I shared them all with my daughters, which is important. So, I would guess there’s some relief. But there’s also, like I told the guys before the game, as corny as it sounds, you’ve got to play with joy. You really do. We’re playing college basketball in the SEC, at a great school. Right? And against a top team. Play with some real joy and enthusiasm. So, I think there’s that. The guys were happy. They were happy, but they weren’t overly giddy, but they were excited. They earned it. They know it. That’s what we’ve said. We’ve just got to get this thing started. We’ve just got to get it started. And that happened for us tonight. So, there’s some relief. For me it’s happiness for them and for the staff and really for our families. But here in about 30 minutes I’ll be on to Vanderbilt.”

On looking ahead to Vanderbilt…
“I think that’s it. Come back, practice well, get ready to play Vanderbilt. Hopefully have a healthy Kario Oquendo. We didn’t have that the last time we played them. And we’re still right there to win the game. So this will do wonders for them. That doesn’t mean we’re going to win, but what it will do is it will do wonders for them as we move forward because now they have this under their belt. So you enjoy it. You process it. You learn from it and you get ready for the next one. That’s all we’ll do.”

On the importance of free throws…
“It’s very important. This is a very physical league. Everyone’s really aggressive defensively. We know that we’re going to get fouled night in and night out, so we have to be able to make free throws. Coach Crean does a great job of implementing free throws into our practice plans and our shootarounds. It’s huge. It paid off tonight. I’m glad we got the win, and that was a big part of it.”

On the defensive adjustments on Jaden Shackelford…
“That was a really great scout by the coaches. Coach (Wade) Mason did a really good job of telling us that he already had 16 points and was shooting mostly catch-and-shoot threes. He told us to stay attached and not let him get anything where he’s catching and shooting it. We tried to run him off the line, and it helped us get the win because we frustrated him and kept him out of the game. Keeping a really good player like that quiet, especially when he’s their best player, is huge. It’s a big ‘attention to detail’ type of thing, so it was a great job by the coaches and a great job by the players to execute.”

On the confidence of the team…
“It means everything. We just have to keep building on it. We knew that we could play with any team in this conference. We feel like we’re good enough to play with any team. Based on how the games have been going, we’ve been in pretty much every game until the end. I tried to tell the guys after some of our losses that no man is defeated until you accept defeat as a reality. I feel like that’s a big thing in this team, not giving up. I feel like we never give up, and we just continue to fight. That type of stuff pays off at the end of the day. The job is not done. We still got to win more games, but it was a big win for us, a big confidence boost.”

On the win tonight….
“It felt very good. Everybody has been waiting on this moment, we’ve been working hard in practice. Staying consistent and not getting down. Our main focus was just taking one game at a time. We finally got our ‘W’ and continue to build on that.”