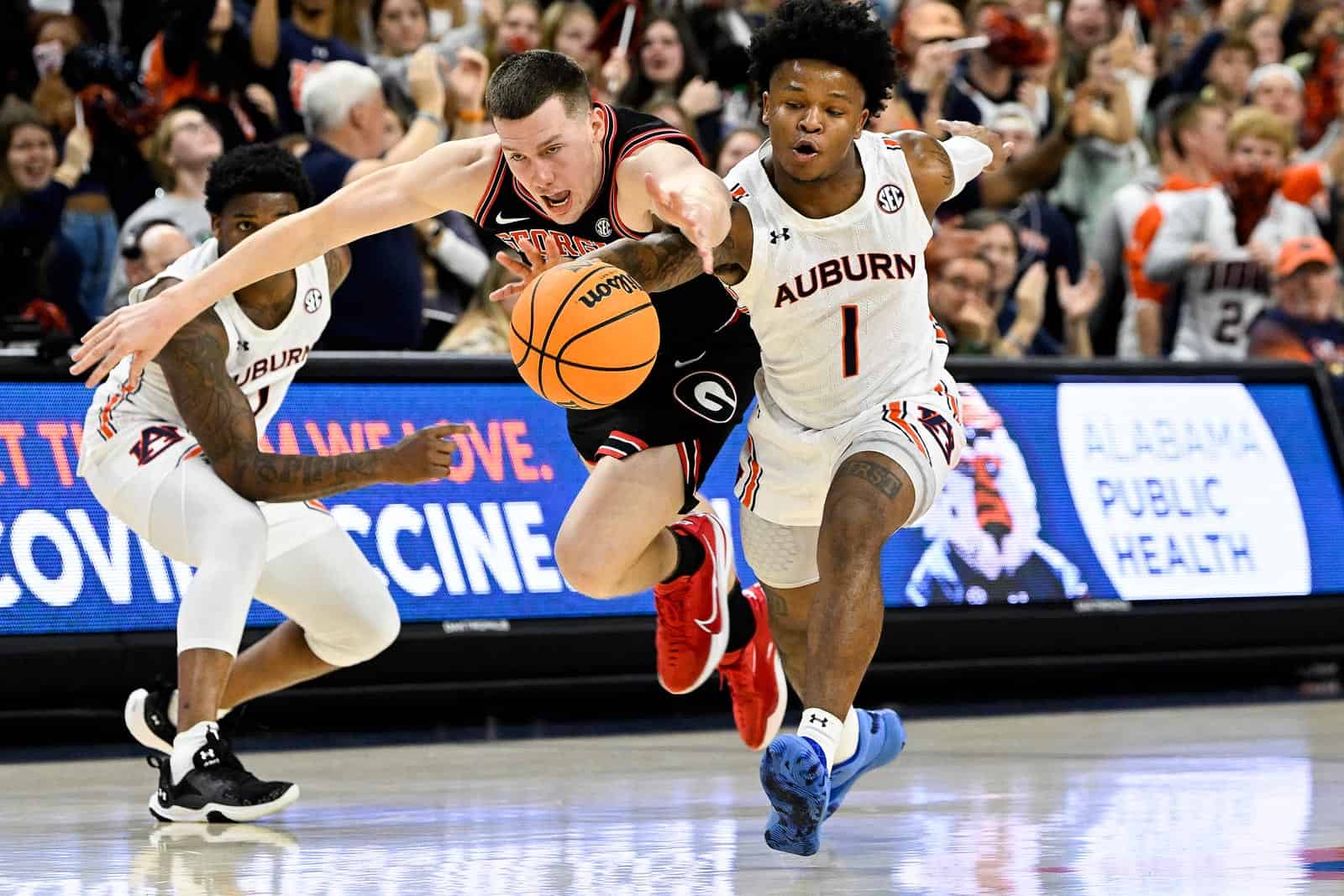 AUBURN, Ala. – In the latest renewal of its longest-standing conference rivalry, the University of Georgia men’s basketball team fell, 83-60, to No. 2 Auburn before 9,121 spectators Wednesday evening at Auburn Arena.

“It was going to be hard no matter what, and then, without Kario Oquendo, it got a lot harder,” said Georgia head coach Tom Crean following the game. “We played hard. When we played it the right way and moved the ball, even if we missed, we were getting great looks. We played the zone more aggressively when we were coming down from 24 to 16. We had six stops in a row, and they started settling for threes and we were able to rebound the ball.”

Both teams came out firing with Bridges quickly finding success in the paint, while Tigers guard Allen Flanigan hit two early threes. Following the first media timeout, Auburn (17-1, 6-0 SEC) used a series of Georgia turnovers to rattle off an 11-2 run. The Bulldogs responded with five unanswered, including a tough and-one bucket from Wright on a fast break. However, the Tigers continued to find success from beyond the arc with a pair of 3-pointers as their lead ballooned to 13 by the under-8 timeout.

After graduate Aaron Cook hit a triple to make it a 10-point game, Auburn began pulling away with two more treys to put itself up 39-20 with just over five minutes to play in the first. The Tigers’ run eventually reached 16-2 before junior Jaxon Etter cut it off with a three. With a couple of free throw makes in the final minute, Georgia headed to the locker room trailing 50-27.

Georgia started the second half looking to cut into the deficit, aided by a 3-pointer from Baumann and repeated trips to the foul line. With strong play in the paint, the Bulldogs’ 12-2 run brought them to within 16 points with 12 minutes to play. After Auburn responded with consecutive 3-pointers, Baumann matched with two of his own to make it 67-51 with under 10 minutes remaining.

Aside from a layup from sophomore Jabri Abdur-Rahim, the Bulldogs did not score a field goal in the subsequent six minutes, allowing the Tigers to restore its advantage. Baumann finally broke the drought with a layup with Bridges adding the final points of the evening via a layup and free throws.

Georgia remains on the road this weekend as it takes on South Carolina on Saturday, Jan. 22 at 3:30 p.m. in Columbia. The game will be broadcast live on SEC Network.