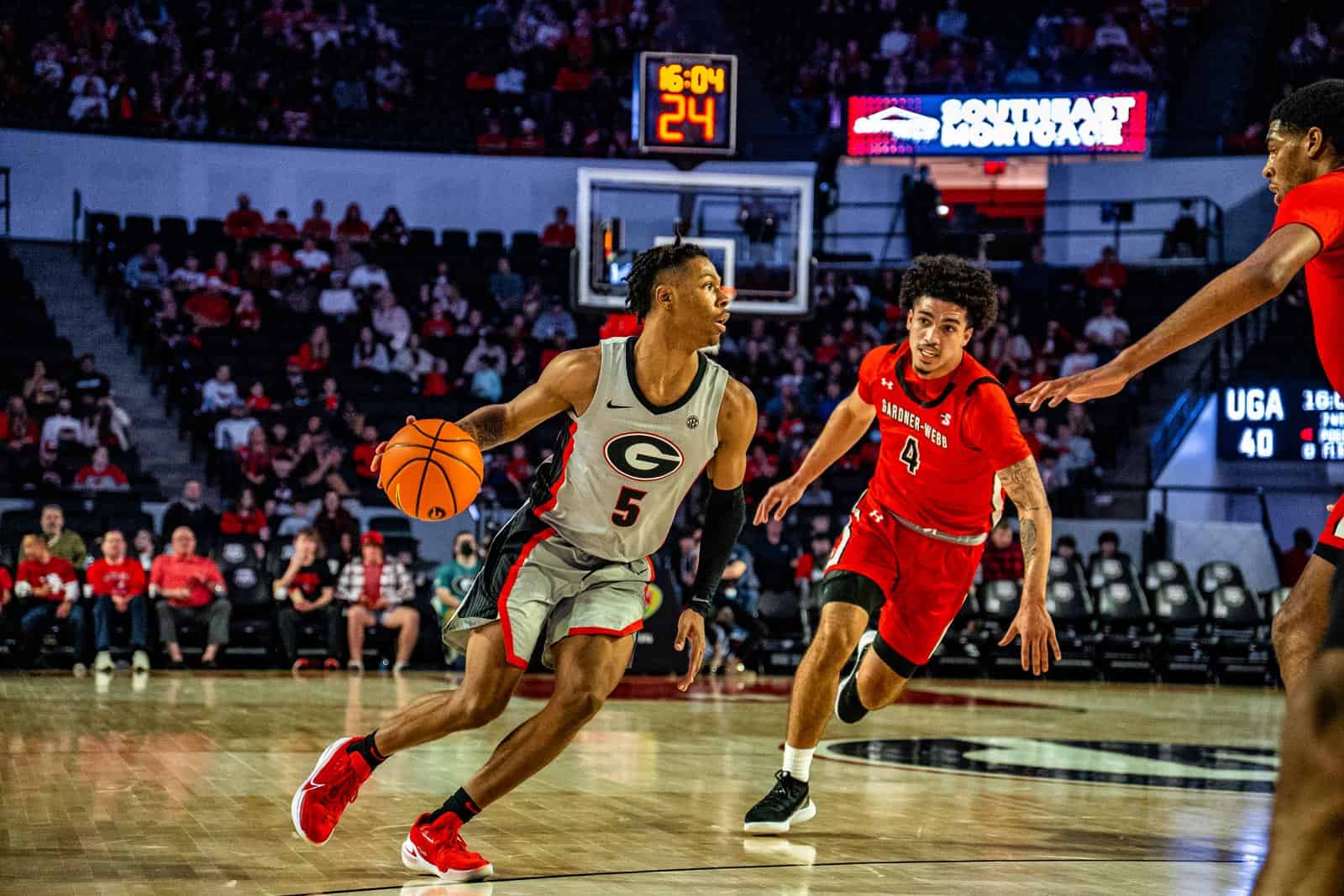 Redshirt senior Braelen Bridges led Georgia (5-8) with 17 points on 7-for-13 shooting, along with a team-high seven rebounds. Sophomore Kario Oquendo tallied 12 points and five rebounds, while redshirt senior Noah Baumann pitched in with 11 points and five boards. For the evening, the Bulldogs shot 37.3 percent from the field.

“We got off to a slow start,” said Georgia head coach Tom Crean following the game. “So, we have to figure out what kind of adjustments we’re going to make to that and regroup it a little bit because we can’t afford to get off to bad starts. We play hard. There’s no doubt about that.”

Both teams opened the game with quick tempos as Gardner-Webb (6-7) assembled a 18-8 lead in the first seven minutes of play, while Bridges paced Georgia with six quick points. The Runnin’ Bulldogs extended their lead to 12 before a 3-pointer from Baumann kickstarted the Georgia offense and narrowed the margin to eight midway through the period.

Coming out of the under-8 timeout, Gardner-Webb’s offense accelerated, running off a 10-2 run and bringing the lead to 39-23 with five minutes to play in the half. After a Baumann four-point play cut the lead to 12, the Runnin’ Bulldogs responded with a triple of their own. In the final seconds, Bridges broke a scoreless drought for both teams with a jumper, setting the halftime score at 44-31.

The Georgia attack came out strong to open the second half, scoring nine unanswered to bring the deficit back to single digits, led by Bridges and Oquendo. Gardner-Webb then responded with an 8-2 run as Georgia struggled from the field, with the advantage eventually reaching 21 with eight minutes to play.

The Bulldogs worked to close the gap and spark a comeback as the game wore down, with graduate Aaron Cook and Oquendo each posting tough scores at the rim. With less than two minutes remaining, freshman Tyrone Baker drove hard for a contested layup, but the deficit was too steep to overcome as Gardner-Webb sealed the victory.

Georgia remains home next week as it begins the conference season against Texas A&M on Tuesday, Jan. 4 at 7 p.m. The game will be broadcast live on ESPNU.

• Tonight’s loss marked the fifth ever meeting between the Bulldogs and the Runnin’ Bulldogs. Georgia still leads the series 4-1.

• Rotation – Georgia has now used six different starting lineups in 13 games and has not used the same starting five more than three times.

• Consistent Kario – Sophomore Kario Oquendo finished the game with 12 points, his third straight game with double-digit points and his seventh this season.

• Getting Comfortable – Senior Noah Baumann notched double-digit points for the second consecuive game and third time as a Bulldog. Baumann also played 36 minutes, a season-high for him.

On how much blame he places on himself…
“I put it all on myself. I’m the coach, so I have to do a better job all the way around. That’s what it is. You take responsibility. I have to find a way to give better answers. We got off to a slow start, so we have to figure out what kind of adjustments we’re going to make to that and regroup it a little bit because we can’t afford to get off to bad starts. We play hard. There’s no doubt about that. We knew this afternoon when he couldn’t really go that we would be playing without Jaxon (Etter) who just brings an incredible level of physical toughness but really that mental toughness and ball movement. We really didn’t make up for that tonight. Hopefully we’ll get him back soon. I think, as a coach, you take responsibility. My job is to make these guys – help them get better, help them believe, find a way to give them better answers during the game.”

On keeping the team and fans positive about the program…
“We just have to get better. I thought our fans were great tonight, the ones that were there, they were fantastic. We had a bad night because we got off to a slow start. We’ve had some bad nights and the slow starts are hurting us. I’ve got to look at it closely and decide what we want to do to make adjustments. But, it’s a long season, conference play starts and we’ll find a way. We’ve got to look at this closely on what gives us the best chance to win each night when we don’t have the physical strength that we have to have. Bottom line is we didn’t guard the dribble as much as we needed to tonight, we could spend a lot more time on that. But, you don’t want to give a team that lives on middle drive like that those drives. The ball didn’t move at a crisp rate tonight. That’s one reason why Jaxon (Etter) has been in the lineup like he’s been. We’ve got to find a way to have more ball movement, body movement in games early on. I’ve got to do a better job of holding them accountable to screen, our physicality, steals, things of that nature. We’ve just got to look at that, it’s a long year. We haven’t played any conference games yet, I’m not really in a look-out mode now, as we speak, but I am looking forward to getting that film. We’ve got 18 conference games coming up and we need to find a way to get better.”

On the rotation and Cam McDowell..
“He’s had some good days and he brings in energy. He’ll get better, I’ve certainly wanted to play him in the past. In this situation he’s had three good days, tonight and the fact that Jaxon (Etter) was out made that a necessity. He took advantage of the opportunity the last three days. I said to him earlier, if he had been practicing consistently as he has been the last three days, it might have been different early on, but we’re going to build like we have since Sunday night.”

On fight and determination from guys…
“Oh yeah, but I also see quietness. We got to give them a belief, but yeah they were still playing extremely hard. I don’t think that’s an issue at all, I mean they practice great. We’ve had three really good practices. Not too long, but really good practices. So, our slow start caught us and again we just didn’t guard the dribble as well. Bottom line, we got to keep finding a way for them to communicate better on the floor.”

On needing to find answers and improving between games…
“It’s me being the coach and taking responsibility for the game. That’s what it means and just trying to make the game easier for them all the time. That’s really what it is. It’s not as much about an x and o situation. We’ve got to have some accountability for our screening, for our ball movement, for movement without the ball and make adjustments that they’ve got to have. It always starts with the coverage, right, I mean that’s what it is. It’s not like we’ve had bad practices. In fact, we’ve had really good practices, but that’s all that that means.”

On the mood after the game…
“They’re a scrappy team. If you look at the team’s they’ve played, they’ve played some really high-level teams. They played Duke at Duke. They played a couple of close ones. They beat Western Carolina by 25 or 30. We knew they were dangerous, and we let them be dangerous. Again, we had a slow start. It’s just really frustrating. I’ve been on a losing team my first two years of college basketball, and this team is nothing like that team. I’m not saying that we’re losers or anything like that. We have so much potential and so many players that can do much more, myself included. There’s a lot more that we all can do. It’s just frustrating when we’re not helping each other. We’re not feeding off each other like we should as a real team. It’s just frustrating, but they’re a good team. Gardner-Webb, they’re dangerous. You saw what their players can do, but, at the same time, we let that happen. Ups to them for having a good game, but it’s another game where we just got outplayed, simple as that.”

On having slow starts…
“That’s something that at I have been preaching to the starting group. Every time we’re going into that four-minute media timeout, it’s always like 6-19 or 6-18. Today, it was 5-18, slow start. I’ve said this a few times. It’s hard to just crawl and crawl and try to fight our way back every game. We just got to figure that out eventually. It just starts on defense. I feel like, offensively, we can get stuff going. Tonight, we didn’t play particularly well, the last couple of games offensively, but defensively, we are not locked in. We got to put a foot on that, and it’s got to start, especially going into SEC play. Those guys are really good basketball teams, and we got to do something about that.”

On the game tonight..
“Obviously, we usually let our defense get us going. We really couldn’t get stops tonight. Then we let our offense dictate our momentum, basically our mood in the game. We were down. We couldn’t get any stops. Usually our stops get us going, get the crowd going, get everything going to make us get back into the game. Unfortunately, we just got to keep working.”

On the slow starts…
“I know SEC play is coming up and slow starts aren’t going to cut it. So we’re going to pick it up starting next Tuesday.”

On the 9-0 scoring run in the second half…
“I felt like we locked in on defense more. Our intensity picked up, we started locking in, staying with our man, guarding the ball, just making them make tough shots, rebounding, getting out and run, and executing on the offensive end.”

On Coach Crean’s message in the locker room postgame….
“Just be ready to get to work, we got SEC play, stay focused, work hard. We got to figure out this defense. Just stay positive.”