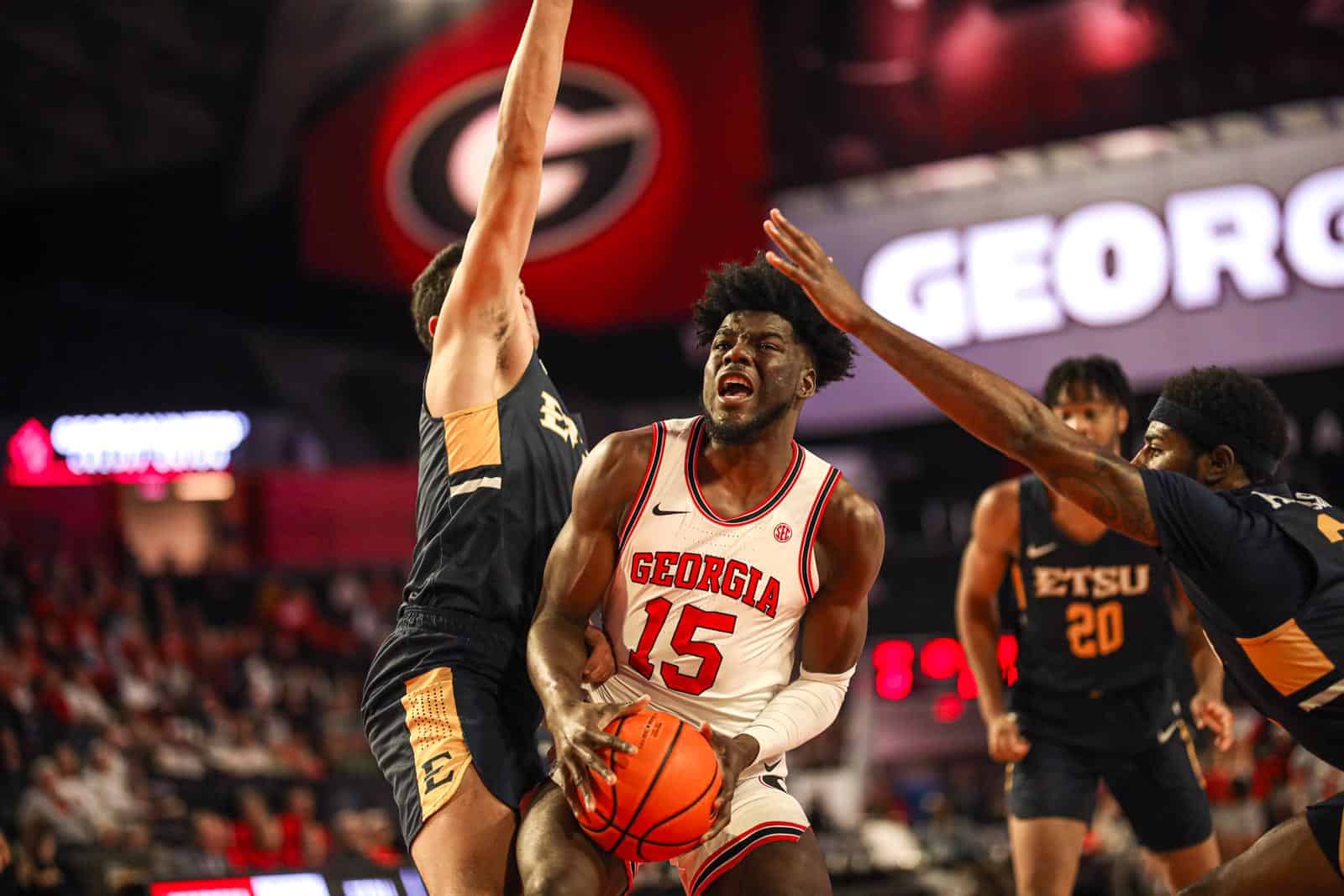 Senior Noah Baumann led Georgia (5-7) in scoring with a season-high 25 points on 8-for-10 shooting, tying his career high with seven 3-pointers, while also leading the team with seven rebounds. Graduate Aaron Cook tallied 17 points and six assists, while sophomore Kario Oquendo notched 15 points. For the game, the Bulldogs shot 48.3 percent from the field and made 14 3-pointers, the most in head coach Tom Crean’s tenure.

“We had a rapid last 15 minutes defensively, and we played much better,” said Crean following the game. “We have to learn how to play a complete game. Defensive pressures, making other teams feel us in a way, bringing physicality. We only practiced for about 45 minutes yesterday, but our defense was physical and aggressive. Today’s walk-though was great. We just didn’t get off to a great start.”

East Tennessee State (8-5) opened the game firing as senior David Sloan posted nine quick points to race out to an early 12-4 lead. Following a timeout, Georgia rebound with six unanswered to narrow the margin, but ETSU moved back ahead with consecutive threes. After the Bulldogs brought the score to within one, the Buccaneers rattled off a 9-2 run to lead 27-19 with under nine minutes to play.

The Bulldogs fought back as the half began to wind down, retaking the lead on a Baumann 3-pointer from the top of the key. Even as ETSU responded once again, Baumann kept Georgia in the game with four threes in the first half. Nonetheless, the Buccaneers were able to close the half with a 10-3 run, heading to the locker room with a 48-39 lead following a buzzer-beating layup from freshman Mohab Yasser.

ETSU began the second half in similar fashion to the first, extending its lead to 14 in the first minute, while Oquendo stepped up for Georgia with three straight scores. Combined with Baumann’s continued shooting success, the Bulldogs closed to within two at one point, but the Buccaneers were able to maintain a slight advantage. Finally, with just over eight minutes to play, Baumann made it a one-point game with his seventh trey of the evening, followed by a go-ahead layup from Cook.

Cook eventually scored nine straight points for Georgia, helping the Bulldogs build on their newfound lead. Aiding in the Bulldogs’ comeback was ETSU’s struggles at the foul line – the Buccaneers eventually finished 27.8 percent from the charity stripe for the night. Cook continued to shine as he connected on a 3-pointer with four minutes to go to give Georgia its largest lead at eight.

However, ETSU made one last rally in the final minutes as it tied the game with eight unanswered points, but Baumann broke the tie with a driving layup with 35 seconds to play. With the game and shot clocks running down, Sloan put the Buccaneers back in front with a step-back triple. On the other end, Baumann’s corner attempt rimmed out as ETSU secured the win.

Georgia closes its non-conference slate with a matchup against Gardner-Webb on Wednesday, Dec. 29 at 7 p.m. at Stegeman Coliseum. The game will be streamed live on SEC Network+.

• Tonight’s game marks the fifth meeting between the Bulldogs and Buccaneers – ETSU leads Georgia 3-2 in the series.

• Sharp Shooter – Graduate Noah Baumann tied a career-high with 7 3-pointers and scored a season-high 25 points. Baumann’s .777 (7-for-9) effort from beyond the arc tied Georgia’s sixth-best 3-point shooting performance ever.

• Three’s Company – Georgia’s 14 3-pointers is the Bulldogs’ most ever under head coach Tom Crean.

• Nearing Milestones – Graduate Aaron Cook tallied 6 assists and 17 points, notching his 53rd career double-figure game and seventh of the season. He is 14 assists away from reaching 400 for his career and 19 steals away from registering his 200th theft.

Opening Statement…
“I appreciate the fans. The fans were fantastic tonight. They were helping us. We had a rapid last 15 minutes defensively, and we played much better. We have to learn how to play a complete game. Defensive pressures, making other teams feel us in a way, bringing physicality. We only practiced for about 45 minutes yesterday, but our defense was physical and aggressive. Today’s walk-though was great. We just didn’t get off to a great start. Some guys were not at the top of their games tonight, and we had to do some mix-and-match. We have to find a way to play a 40-minute game with defensive pressure, with transition defense and just getting up into people. We told our team, and Steve McClain made this comment, and I didn’t say anything different. ‘That was as good of a one-through-five starting lineup as we’ve faced all year.’ Obviously, they were missing their starting center. We were going to have to be on it from the beginning with our defensive pressure because of the way their guards shoot. We just weren’t as good to start, and we had our chances towards the end. We missed a three, and that’s that.”

On the offense…
“They scored on turnovers, and that’s what becomes hard. We never really go established in the post with seals and things of that nature. We have to be aggressive. I think we were in the bonus at the 11:13 mark in the second half. We needed to get to the free throw line a lot. At times we did, but at times we didn’t take advantage of it the way that we could. The biggest thing, to me, is that we have to have a 40-minute game of locked-in defensive intensity no matter what we’re in. It doesn’t matter what we’re in. Man, zone, whatever it is we have to have locked-in intensity where we’re making it harder for people to see, to penetrate and obviously to shoot.”

On his shooting tonight….
“I just did the same routine as I usually do. I don’t like to do anything crazy, like today wasn’t any odd day or nothing like that. But we started off really slow and I thought a lot of it had to do with me. I think I could’ve helped the team out a lot in the first four or five minutes, and so after that, I just put it consciously in my head that whatever I do, I think I can go a lot harder than this. This is not acceptable for Georgia basketball. So, I’m happy I made some, but I wish the last one would’ve went in. I thought we fought, we kept fighting, fighting, and fighting, but we just need to get into situations where we’re not fighting back that early on in the game. When you climb back, it’s just a hard way to play sometimes, especially game after game after game. We need to start stronger than that.”

On the design of the last play…
“The play was just for AC (Aaron Cook) to dribble down, and then, you got Jaxon (Etter) and Kairo (Oquendo) trailing a little bit, and then, you had, I think, Jabri (Abdur-Rahim) also at the end of the game—me and him just sort of moving around down in the court. I sort of faked out my defender thinking I was going to the other corner, but then, I flipped back to the other corner because I saw it was an overload on the other side already and I was wide open. It was either me or AC really. I thought AC could’ve broke down and defended, but I was wide open and I had an open shot and I was hot. But it felt good. It looked really good, but it didn’t fall, so what can you do.”

On what was going through his head on the last play…
“Win the game. At the end of the day, we kind of make those last plays to win the game, but I think all of us want to hit that game-winning shot. But at the same time, AC (Aaron Cook) is very unselfish with the ball, so he’ll find whoever’s open and I was open. But in my head, it was just to win the game. We fought and clawed the whole way, and at the end of the day, you just want to get that win. Smile as you go through that tunnel, but it is what it is.”

On the first four minutes defensively and offensively…
“Just being totally engaged mentally is a little bit. It was a fast break, so I picked up the guard and he hit that three in my face and I should’ve been up higher. He already made that three, I believe, so I’ve got to understand that if I’m doing that, if I’m walking up and asking a dude for a bag and I’m hot, I’m going to shoot it. Just being more attentive to that part. Then offensively, I think we were sort of just going through the motions. Three games in six days, just trying to get through it, but this is a tough team. ETSU is one of the top teams in their league and they’re coming to fight and win. They played a great game. I’ve never seen so many shots just going for them. It was crazy—they shot amazing. For us, we’ve got to do better defensively. I think the last couple of games, teams have hit a lot of threes on us, and I think we need to improve on that. It’s demoralizing when you get a whole lot of stops and they hit a couple of threes in your face. It can’t happen.”

On the offensive output by the team…
“Once I saw one shot go in, I had to keep attacking just to find a way to keep us in the game. Noah Baumann had a really good overall game. After I made that first one, I wanted to see if I could get another one, and then I made that one. I just kept going until I finally missed. That’s just how it is once you get in a zone.”

On the final stretch of the game…
“They made plays and we didn’t. That’s the bottom line. We turned up the defensive pressure in the second half and got them out of their offense. It worked for a while, but then they kind of adjusted towards that last two or three minutes. They made big plays. They have some players on their team that are good players that made good plays. That’s really all there is to it.”

On his steal late in the second half…
“We made an adjustment to try and trap those guards to try and contain them coming off of ball screens. That’s where they were really hurting us, off of ball screens. We made that adjustment and tried to jump it one time, and it worked. Jabri (Abdur-Rahim) got the steal and threw it ahead to me. Like I said, I just knew that the first one went in, so I wanted to attack them and get to the rim and try to score. I got the foul and-one. It was a big-time play, but it wasn’t enough.”