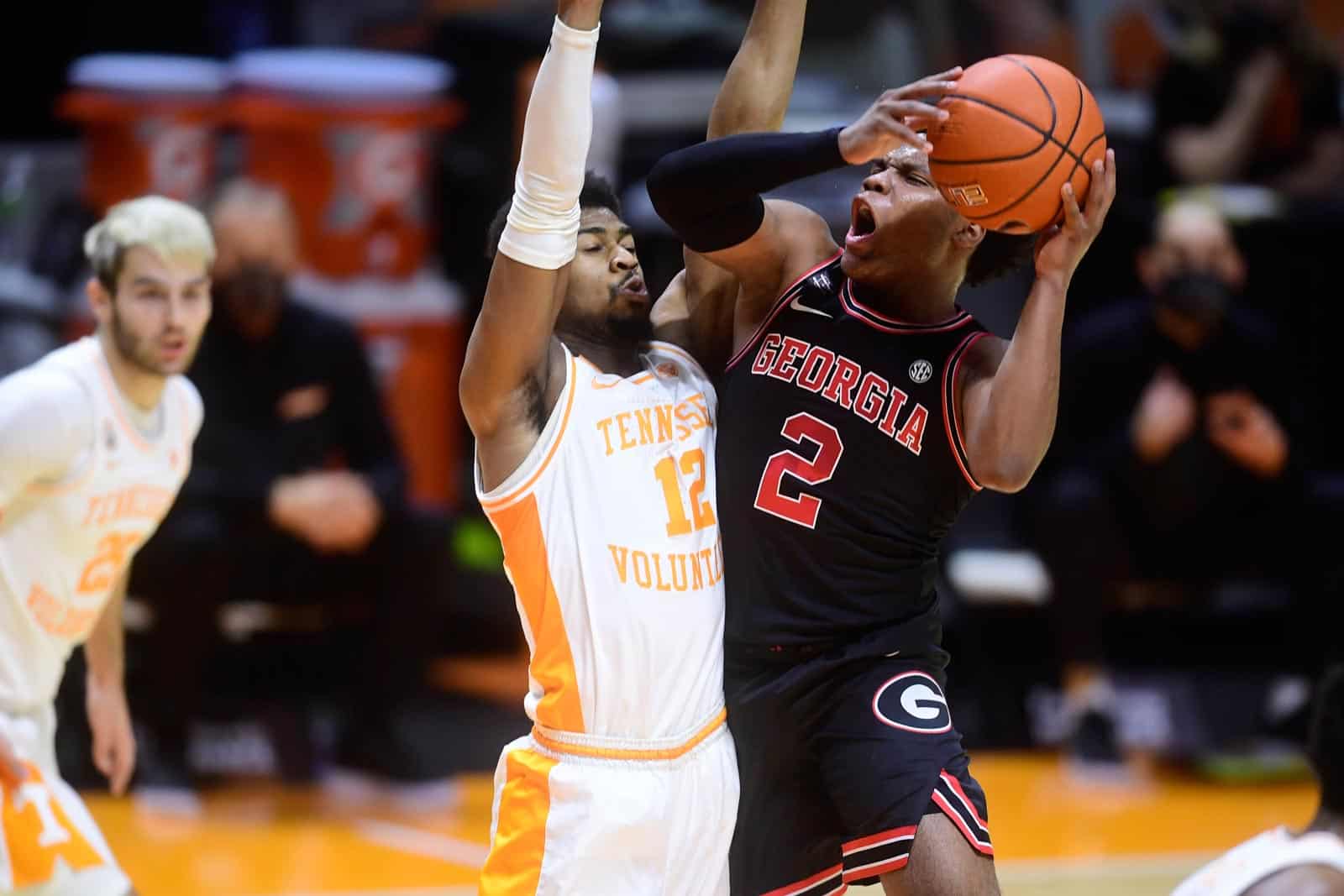 Knoxville, Tenn. – With the comeback effort falling just short, the Georgia basketball team dropped an 89-81 contest to No. 16 Tennessee at the Thompson-Boling Arena Wednesday night.

With the difference at one point being as high as 23, the Bulldogs would claw their way back cutting the lead to as close as six within the closing minutes of the game, shooting 55-percent in the second-half to help close the deficit. Free throws would be the deciding factor down the stretch with both teams shooting over 80-percent. Tennessee would get the edge making 25 of 29 to Georgia’s 20 of 25.

Three Bulldogs saw double-digit nights with freshman K.D. Johnson leading the way with 22, a career high and just his second night finishing with over 20 points. Sophomore Toumani Camara finished his night with 14 points and eight rebounds and fellow sophomore Sahvir Wheeler capped his night with 11 points and five assists.

“We just have to understand the level on consistency that it (intensity on defense) has to be at, again, it’s the challenging shots and it’s the communication in transition,” Head Coach Tom Crean said. “We have to play with force for 40 minutes and we have to play aggressive for 40 minutes. Int the second half, we played a lot faster with less turnovers.”

From the jump, both teams were feeling confident offensively, kicking off with a Kier lay-up. Tennessee would find their groove early, making their first four shots, including three triples. P.J. Horne and Camara splashed a few of their own to put the Volunteer lead at five, 13-8, where it would stay until the under-16. The hot offensive start would quickly cool for both teams as both would only add six total points to the total. Tennessee would hit a pair of jumpers and Fagan sank a pair of free throws keeping the Volunteer’s lead just out of reach 17-10 at the under-12 timeout. Jaxon Etter, who saw a career high in minute, hit a layup that ended the almost 6-minute scoring drought, but Tennessee went on to add a couple of free throws to keep their distance. Both teams would continue to trade blow for blow before Tennessee jumped out on a 5-0 run to give the Volunteers a 31-21 lead at the under-eight. The first half ended on a 9-2 Tennessee run, thanks to a couple of shot clock buzzer beating 3-pointers to send Tennessee into the break with a 44-26 lead.

Picking up where they left off, Tennessee would jump out to 10-2 run to start the second half. Bulldogs would show signs of life, however, going on a 5-0 run themselves thanks to the combined efforts of Camara and Horne. Volunteers would lead 51-33 at the under-16 timeout. Georgia continued to fight, going on a stretch making six of seven including a Camara and Johnson layup, with a Horne triple to cut the lead to 14 before a Volunteers push that took their lead back up to 21 thanks to a 7-0 run before the under-12. Johnson would go on a personal run, sinking a three, and converting an and-one. Andrew Garcia contributed as well, sinking a couple of free throws. Fagan would put an exclamation point on a 9-0 Bulldog run with a slam that forced a Tennessee timeout with the lead cut to 13 at the under-eight. Out of the media timeout, Bulldogs would keep pushing, extending out to a 14-3 run bringing themselves within 11. Tennessee would push their lead back to 14 but two Camara free-throws and a Johnson dunk brought the lead back within 10. A wheeler layup closed the gap even further before John Fulkerson flushed a layup of his own to bring the lead back to double digits heading into the under-four. The Bulldogs gave it their all and would cut the lead to as close as six within the closing minutes before teams would go back and forth trading layups and free throws that ultimately led to an 89-81 Tennessee win.

Georgia will return to action on Saturday, Feb. 13 at No. 11 Alabama. Tip off is set for 3:30 p.m. with television coverage provided by SEC Network.