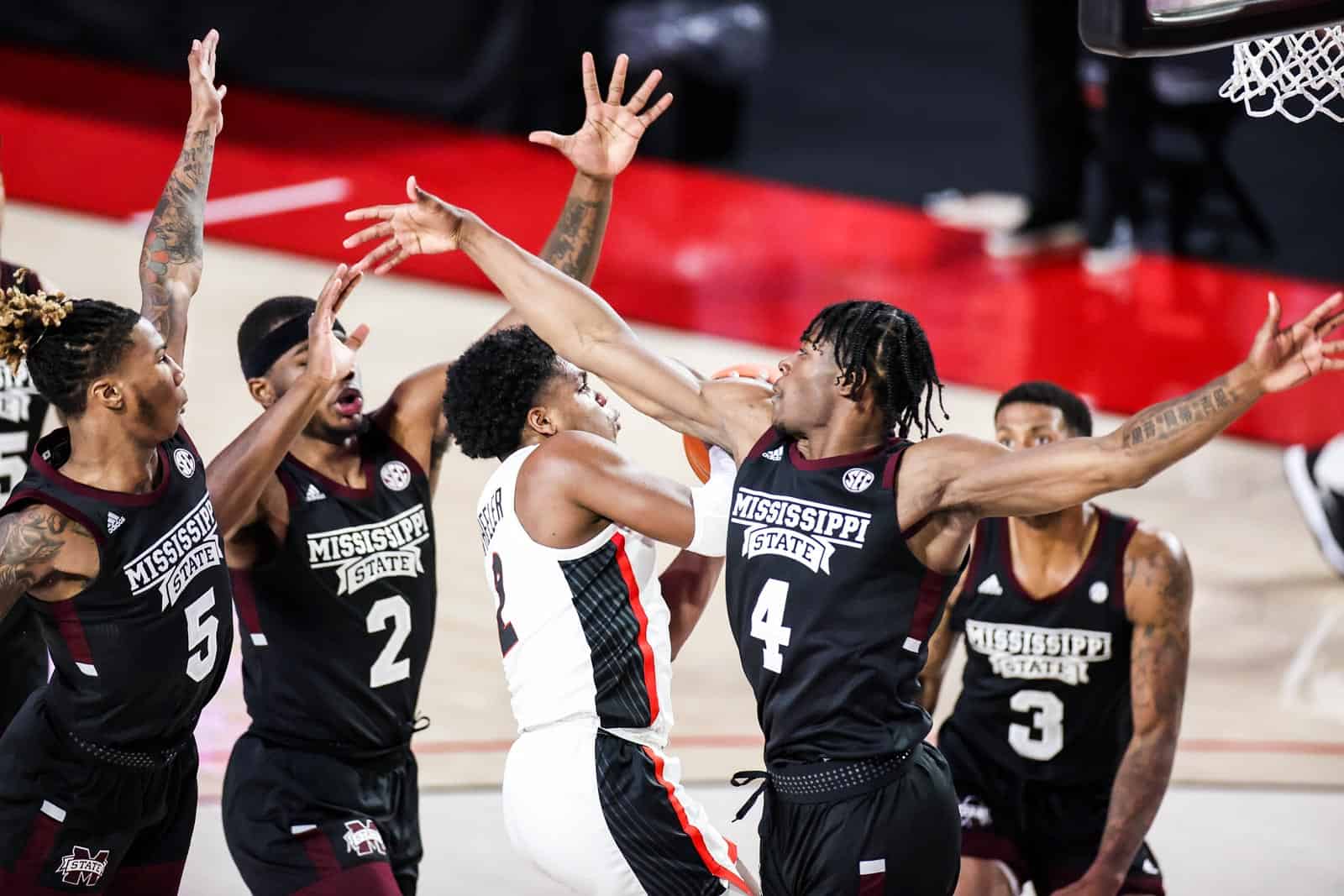 ATHENS, Ga. – Despite a valiant comeback effort in the second half, the University of Georgia men’s basketball team fell, 83-73, to Mississippi State in its Southeastern Conference opener Wednesday evening before 1,638 fans at Stegeman Coliseum.

Graduate P.J. Horne led Georgia in scoring with a career-high 21 points on 7-for-13 shooting, including five 3-pointers, while sophomore Toumani Camara notched his third double-double of the season with 11 points and 11 rebounds. Junior Tye Fagan and sophomore Christian Brown each scored 10 points, while sophomore Sahvir Wheeler led the Bulldogs with eight assists. For the game, Georgia shot 40 percent from the field, but the Bulldogs did tally a season-high nine 3-pointers on 36 percent shooting.

“We were extremely too quiet,” said head coach Tom Crean following the game. “We’ve had some moments like this in games and we’ve been able to overcome them. But you can’t beat good teams in this league if you are not more active defensively. We were in position, but we were not as active because we let our lack of offense in the first half control our defensive effort.”

Both teams took some time to heat up in the early going as a 3-pointer from Horne at the 16:35 mark finally put Georgia on the board. Conversely, Mississippi State established itself from outside with six treys in the opening 10 minutes, including three from freshman guard Devion Smith. Capitalizing on another Georgia dry spell, MSU extended its lead with a 10-0 run, but the Bulldogs started to fight back with seven straight points from Horne.

Despite Horne’s run, Mississippi State remained comfortably ahead for most of the half, leading by as much as 20 with under four minutes remaining. Sophomore Tyron McMillan then broke a nearly-four-minute field goal drought with a jumper, while Brown pitched in with a 3-pointer to narrow the margin just before halftime. The short scoring burst was capped off with a buzzer-beating tap-in from graduate Andrew Garcia, bringing the score to 41-27 at the half.

Graduate Justin Kier opened the second half with a quick jumper, but sophomore guard Iverson Molinar helped rebuild the lead for Mississippi State with back-to-back jumpers. Fagan and Horne kept Georgia in striking distance with two 3-pointers apiece, slicing the MSU advantage to 12 points at the first media timeout. The Bulldogs continued to chip away at the deficit, finding Camara inside for consecutive layups. The contest then settled into a back-and-forth with MSU maintaining an 11-point lead at the under-8 break.

Mississippi State’s strong shooting allowed it to withstand the Georgia run as a 3-pointer from sophomore guard D.J. Stewart, Jr. returned the lead to 16 with less than four minutes to play. Georgia attempted one last comeback effort in the final three minutes with a 13-3 run, but a pair of late misses at the rim allowed MSU to seal the game at the foul line.

Georgia now turns its attention to its first road trip of the season, beginning at LSU on Wednesday, Jan. 6 in Baton Rouge, Louisiana. The matchup with the Tigers is set for a 7 p.m. tip time and will be broadcast on SEC Network.

• Sophomore Toumani Camara secured a double-double in tonight’s game for the third time this season and of his career with 11 points and 11 rebounds.

• Sophomore Christian Brown nabbed a double-figure game for the second time this season and for the third time in his career.

• Junior Tye Fagan captured a double-digit game for the fifth time this season and for eighth time in his career.

• Camara earned his sixth double-digit game of the season and 14th of his career.

• Graduate transfer Andrew Garcia had seasons highs both in rebounds and assists on the court tonight. Garcia posted nine rebounds and two assists.

• Junior Jonathan Ned tied his career high blocks on the hardwood tonight with one.

• The loss ended Georgia’s seven-game winning streak to start the season, its best opening to a season since 1982.

• The setback snapped the Bulldogs’ eight-team winning streak that dated back to last season’s SEC Tournament. That was UGA’s longest streak of success since winning nine consecutive games in 2011-12.

“Definitely, I told the team after the game we played like we were on the road. We were quiet, you’ve got to have strong courage and confidence when you’re not making shots. Our three leaders in the first half were 1-for-20 and in the second half they were 8-for-31. To me, you can’t be quiet because you’re the leading scorer and playing a lot of minutes, you’ve got to be really good and active on the defensive end. We were too quiet, we’ve had moments like that in games and we have overcome them, but you can’t beat good teams or teams in this league if you’re not active, defensively. We were in position, but not as active and I think that’s because we let our lack of offense control our defensive effort. It’s not much the effort, it’s the activity and the talk. The deflections were pathetically low, we had 12 in the first half and 14 in the second. That’s the lowest we’ve been in forever. I know we’re in zone, but you still play with your hands up, you still talk, you still move your feet and are engaged. We didn’t do that, we played with some immaturity tonight.”

“Nothing should affect our talk, and you’ve got to be able to get through it. We missed shots, we settled, but we got much better in the second half. We’ve had some games where we’ve really brought up our practice level to the game. Now, we’ve had some games where our practice level stayed the same and it was really good, but we didn’t bring it to the game. We had a few issues this week, some contact tracing issues and things like that, but we got through it. We just weren’t active enough. Would I like to be playing on Saturday? Absolutely. They gave us a bye so we are on the road for two next week and trust me, we could use the practice time.”

On where he thinks the defensive game plan went wrong…

“We were not as good in our game plan, with some things that they run. The scariest thing all night was the rebounding and were leading it by three and ended up losing it by one. Again, we missed layups, free throws. Like I said earlier, our leading scorers went 8-for-31 and there were six free throws between the three of them. You still got to make something happen defensively, we were not doing a good job of stopping the ball, helping on screens and just weren’t as engaged. When that happens, good teams make
shots. I think their length bothered us, but it did because we settled rather than being on the attack. When we attack and cut, good things happen. That’s what happened in the second half, it’s a 40-minute game and we practice the same way. We have to understand it, that’s how we play. They did a good job of staying in the flow of their offensive, and got a lot more looks because we weren’t as aggressive as we needed to be.”

On what he told the team after a loss…

“I told them some different things. I said everybody needs to be ready, 100-percent ready to go for practice when we go tomorrow, because we’ve got to get better. We’ve got to utilize this time, and we practice well. We practice hard. We’ve had very few practices that I’d like to have back. But, at the end of the day we have got to bring that to the game. Obviously, our habits are not formed to where they have to be and again in a given year you would have played 13, 12, 13 non-conference games before you get into league play, we’ve played seven games. If it were regular season, we’d be in the first of December right now, you know with seven games. But, it is what it is. There is no excuse for us not to be better at we do. Cut, move without the ball, deliver the ball and we’ve got to get used to seeing big athletic teams that want to impose their will around that lane and continue to figure out how we are going to move it. When we did P.J, Horne made threes, when we did Toumani [Camara] got cuts, when we did we got some post ups. When we did we got some layups. And again, when we make our layups in the first half, it’s a tied game. Right? We make our layups, and free throws were probably up.
But, we let those things affect us, and we were never as aggressive defensively as we needed to be. That’s what we have to work one every day to get better for the next one.”

On why he thinks the team has had some slow starts…

On what the difference in halves were…

“I don’t think we’re taking too many [threes], I think we’re not taking enough good ones. Sometimes, we get in a hurry, which happens in the game of basketball, we just have to be better and take better shots. In the second half, we have better cutting, better ball movement and we made some shots.”

“I thought we could do better with our energy. When we missed those shots in the first half, we hung our head a little bit. We continued to fight hard, but I felt like we could have done a better job of bringing the energy. There’s always something that’s there to give you a boost in the game. When your head is down you tend to miss that sometimes. We might have missed a few moments where we could have had something to pick us up. We’ll work on that and get better at that at practice tomorrow.”

On the effect of lack of energy on the game…

On what Mississippi State did that UGA could not stop…

“Mississippi State had some big guys and they are well coached. They were well coached, and they were disciplined on the offensive end and the defensive end. We just need to be able to compete at a level where it can sway the momentum of the game. We have to be able to control what we can control. Some stuff you can’t control and can’t worry about. You can only control what you can control.”

On how bad offensive play impacts the team…

“It changes it a lot—when it snowballs like that and there is no energy. It is going to be hard because now you’re trying to lift yourself up. It’s hard to do that when the game is going so fast.”

On being a leader and what he tells the team…