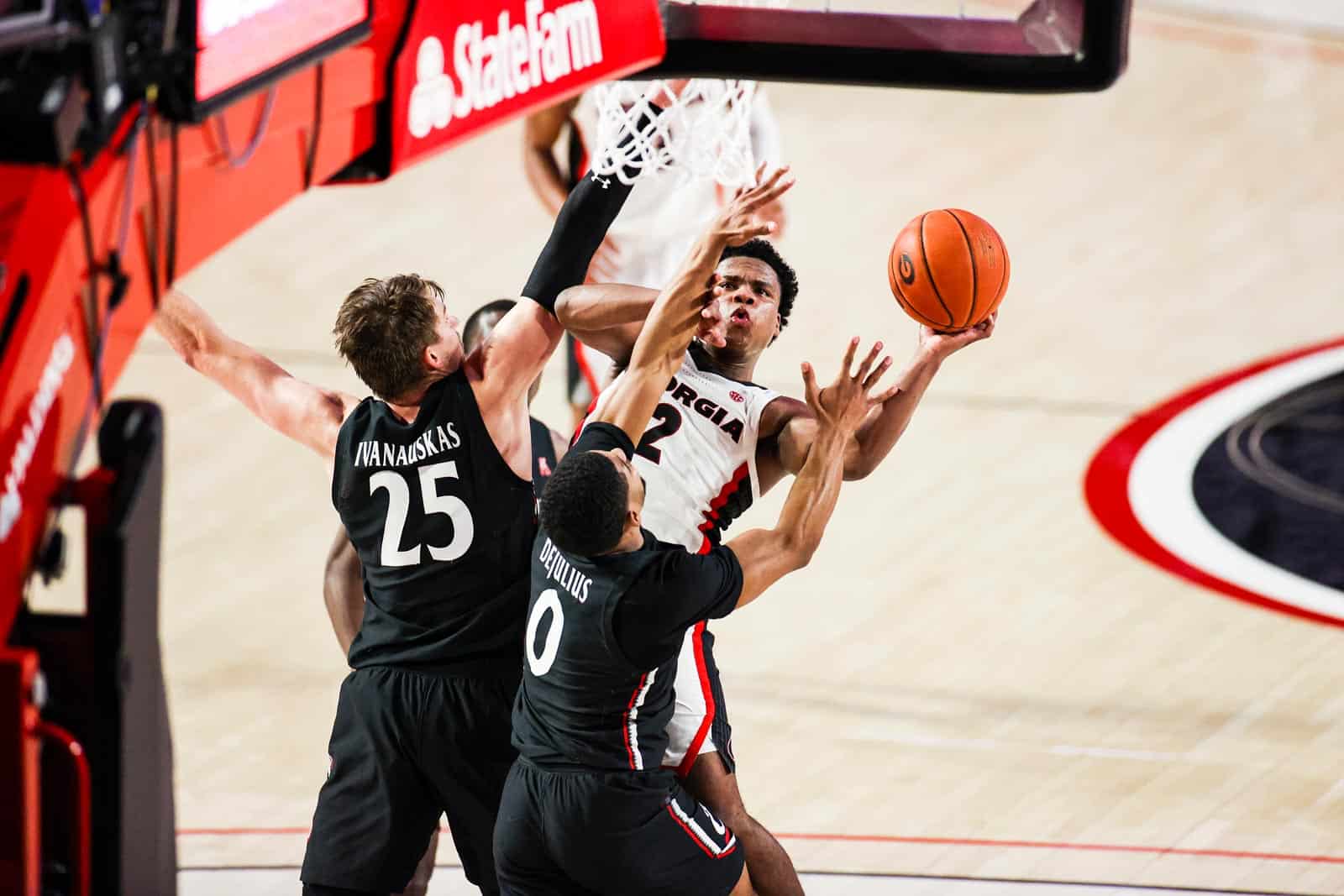 ATHENS, Ga – Bolstered by a 15-0 scoring run to close the first half, the University of Georgia men’s basketball team defeated the Cincinnati Bearcats, 83-68, Saturday evening in front of 1,638 fans at Stegeman Coliseum. With the win, the Bulldogs (6-0) reached their best start to a season since the 1982-83 Final Four season.

Sophomore Toumani Camara led a balanced Georgia attack in scoring with a career-high 19 points on 7-for-10 shooting, hitting that points mark for the third time this season. Camara also picked up his second double-double of the season with a team-leading 10 rebounds.

Graduate Justin Kier tied his season high with 18 points, while fellow transfer Tye Fagan pitched in 17 points and nine boards. Sophomore Sahvir Wheeler rounded out the double-figures scorers with 12 points, seven assists, and three steals. For the game, the Bulldogs shot 49.2 percent from the field and tallied an 84 percent clip at the foul line.

“I’m just proud of the way we competed,” said head coach Tom Crean following the game. “We knew (Cincinnati was) going to come after it. Our guys responded. We had a great walkthrough. I was certainly concerned going into it because of exam week and we’ve been a little up-and-down this week. But they competed at a high level.”

Both teams played at a quick pace in the early moments with the back-and-forth scoring producing an 11-11 tie through the first six minutes of play. Georgia then pulled ahead with a 10-3 run, powered by seven points from sophomore Christian Brown, but Cincinnati (2-4, 0-1 AAC) responded with three quick buckets to narrow the margin.

Once again, the Bulldogs rallied with another scoring spree, using their transition game to take a 15-point lead into the under-4 timeout. The run was punctuated by a Camara dunk, the final of five consecutive fast break scores. After the break, the Georgia onslaught continued as a Camara 3-pointer and Fagan layup brought the score to 49-26 at the half, a season-high for first half points. The Bulldogs closed the half on a 15-0 run, holding the Bearcats scoreless for the final four-and-a-half minutes of the period.

Facing a 23-point deficit, Cincinnati opened the second half with an offensive rejuvenation, posting a 13-2 run that narrowed Georgia’s lead to 12 at the first media break. The Bulldogs countered the rally with consecutive baskets from Wheeler and a 3-pointer from Kier, helping to maintain their double-digit lead.

The Bearcats attempted again to cut into the margin, but the Bulldogs’ ability to score at the rim, namely layups from Kier and graduate P.J. Horne, helped protect the lead. Following the final media timeout, the Bulldogs continued to increase the lead at the foul line, hitting a game high of 25 points with 2:32 remaining. In the final minutes, Cincinnati finished the game on a 14-4 run, but it proved too late as Georgia clinched a comfortable victory.

Georgia remains home next week as it plays host to the Northeastern Huskies on Tuesday, Dec. 22 at Stegeman Coliseum. The Bulldogs’ non-conference finale is set for a 7 p.m. tip time and will be broadcast on SEC Network+.

• Georgia improves to 6-0 in the season, the Bulldogs’ best start since 1982-83. Georgia started that season with a 9-0 record and eventually reached the NCAA Final Four.

• The only previous matchup between the Bulldogs and the Bearcats was on Dec. 2, 2001 at Stegeman Coliseum, where Cincinnati got the better of Georgia in a 57-51 decision.

• Sophomore Toumani Camara notched another double-double tonight, his second of the season and second of his career with 19 points and 10 assists. Camara tied his career high points for 19 making it a double-digit game, his fourth his season and 12th of this career.

• Graduate transfer Justin Kier put up his fourth double-digit game of the season and 55th of his career. This tied his season high in scoring with 18.

• Junior Tye Fagan posted his fourth double-digit game of the season and seventh of his career.

• Sophomore Sahvir Wheeler scored in the double-digits in tonight’s game for the fifth time this season and the 16th of his career.

• Freshman Josh Taylor had his first block as a Bulldog against the Bearcats.

• Sophomore Tyron McMillan snatched his first assisted dawned in The Red and Black in tonight’s game.

• Sophomore Jaxon Etter recorded had a career-high 2 rebounds in tonight’s game. Etter also attempted his first two free throw’s of his career and made both, tying his career-high points scored with 2.

• Georgia came into tonight’s game leading the SEC in steals with a total of 47 and averaging 9.4 per game. The Bulldog’s totaled 10 steals against the Bearcats in tonight’s game.

On tonight’s victory over Cincinnati…

“I’m just proud of the way we competed. I’d be lying if I said I didn’t have anxiety and anguish leading into this game, in the sense of, ‘OK, here’s where the competition has really stepped up.’ They were coming off a two-game losing streak and I have a lot of respect for (Cincinnati head coach) John Brannen. As I said to the team, ‘For my first year
as a head coach at Marquette at the age of 33, everything was measured by the Cincinnati Bearcats.’ So, it’s extra personal and special to me because that was the bell cow, that was the gold standard, whatever you want to call it, when I got started as a head coach. We lost twice the first year to Cincinnati. Kenyon Martin blocked a shot–I’m still
not sure they’ve ever found that ball he blocked it so high into the crowd. But the next year, we did something nobody had ever done to a Bob Huggins team and we beat them twice. We were the only school, outside of Cincinnati, that won that league while we were all in the league together, and then eventually, we all went to the Big East. Cincinnati
stands for toughness. It’s a great program, great tradition. We knew that they were going to come after it. Our guys responded. We had a great walkthrough. The coaches were talking about the warm-up being as good as it’s been, and I was certainly concerned going into it because of exam week and we’ve been a little up-and-down this week and
not completely healthy and all those different things. But they competed at a high level.”

On his team’s toughness…

“We got tougher tonight, there’s no doubt. I learned a long time ago, the win-and-advance mindset is OK, but if you want to be good, you’re improving while you’re winning and you’re winning while you’re improving. Tonight, we improved inside of the game. We didn’t shoot it great. Heck, we only made four threes, but the bottom line is we got to the foul line, we rebounded the ball. We’ve got to get better there. We’re not going to be able to win a ton of games if somebody’s getting 17 offensive rebounds and turning them into 18 second-chance points. We’ve got to keep doing a good job. Our speed, our quickness–we had 58 deflections, Sahvir had 14, Toumani had 11, Justin Kier had 12. That’s important stuff. Toumani has a double-double in his first game back. Tye Fagan missed a double-double by one rebound. That’s the kind of stuff–we’ve got to have different guys stepping up all night. If you had told me we were going to beat Cincinnati, and Andrew Garcia and P.J. Horne combined for four, I’m not sure I would’ve bought
any stock in that at the beginning of the night. As I said to these guys, those guys defended well, they defended hard, they were threats. Some other people scored and there’s going to be a lot of people scoring on this team throughout the year.”

“That’s a trick question. It’s the best we’ve played this year. I don’t know–I’d have to go look back at the Tennessee game last year. (pause) I would say so because we were doing it through our defense and we were getting out on that break and we were playing with great speed. We made a couple adjustments to move Sahvir around this week and I thought that helped, and we added some things even today to help deal with the pressure and the guys responded to that, they really did. I would say based on the week of exams, based on Toumani not being healthy until just the last couple of days, and the way we came out, I would say yes.”

On getting back into flow…

One the confidence level against a higher-level opponent…

“I don’t think it’s about the level that we play against, I think it’s us as a team finding ourselves. Being able to realize after every game what we did wrong, what we did right and moving forward from that. Just staying confident, trusting ourselves and each other.”

“It’s a mindset for every day. One of my roles is to get rebounds because as everyone knows we’re a small team. Everybody is going to cover the small team, but we can rebound. One of my biggest roles is to rebound. So, I go into every game with that mindset.”

“That’s a good team. That’s a great team that is well-coached. The game is built with runs so, we knew that they were going to make a run and it was about our maturity of stopping that run and not letting it go too far. I think that we did a great job of that. The last five or six minutes I think that we could have rebounded the ball better, and that’s
something that we have to get better at. It’s important not to let up, finish the game, and finish right. But overall, I’m glad that we got the win. With Mikal [Starks] being out, it’s unfortunate. He’s a great defender, great second ball-handler, and we hope he’s back very soon. I’ve been handling the ball all my life, so it wasn’t very new to me when Coach [Crean] told me he wanted me to get on the ball more and I just took that as a challenge. It wasn’t very challenging for me to do that. I just stepped into a different role tonight.”

On the role of graduates with younger players…

“It’s been good. It’s unique that people like me, and P.J. [Horne], have a lot of knowledge throughout the game of basketball because of how much we have played. But we also see what our young guys bring to the table and what they see as well. We exchange research and information to put it together and make a better team. Me, Andrew [Garcia], and P.J. have not been at this level until now, those other guys have been at this level and know what it takes to compete in the SEC, even as young as they are. They bring to the table what they know, and we bring to the table what we know. We put that together and compete every night with that.”

“I love No. 10. That’s one of the closest guys that I’ve been with on the team. You’ve got to get to know him. If you can get to know him well, you know that he’s an outgoing guy, likes to have fun, but he’s about business as well. I think that the sky is the limit for him. He brings so much to the team with rebounding and energy on defense, then
offense is just another perk that he has. We all love him and he’s the guy that’s joyful when you’re close, but when we step on the court it’s all business. It’s so fun to play with a guy that’s unselfish and wants to win. That’s one thing that I can take from him is that no matter what his role is or no matter what coach has told him, he wants to win. He’s
going to do what he’s got to do to win.”