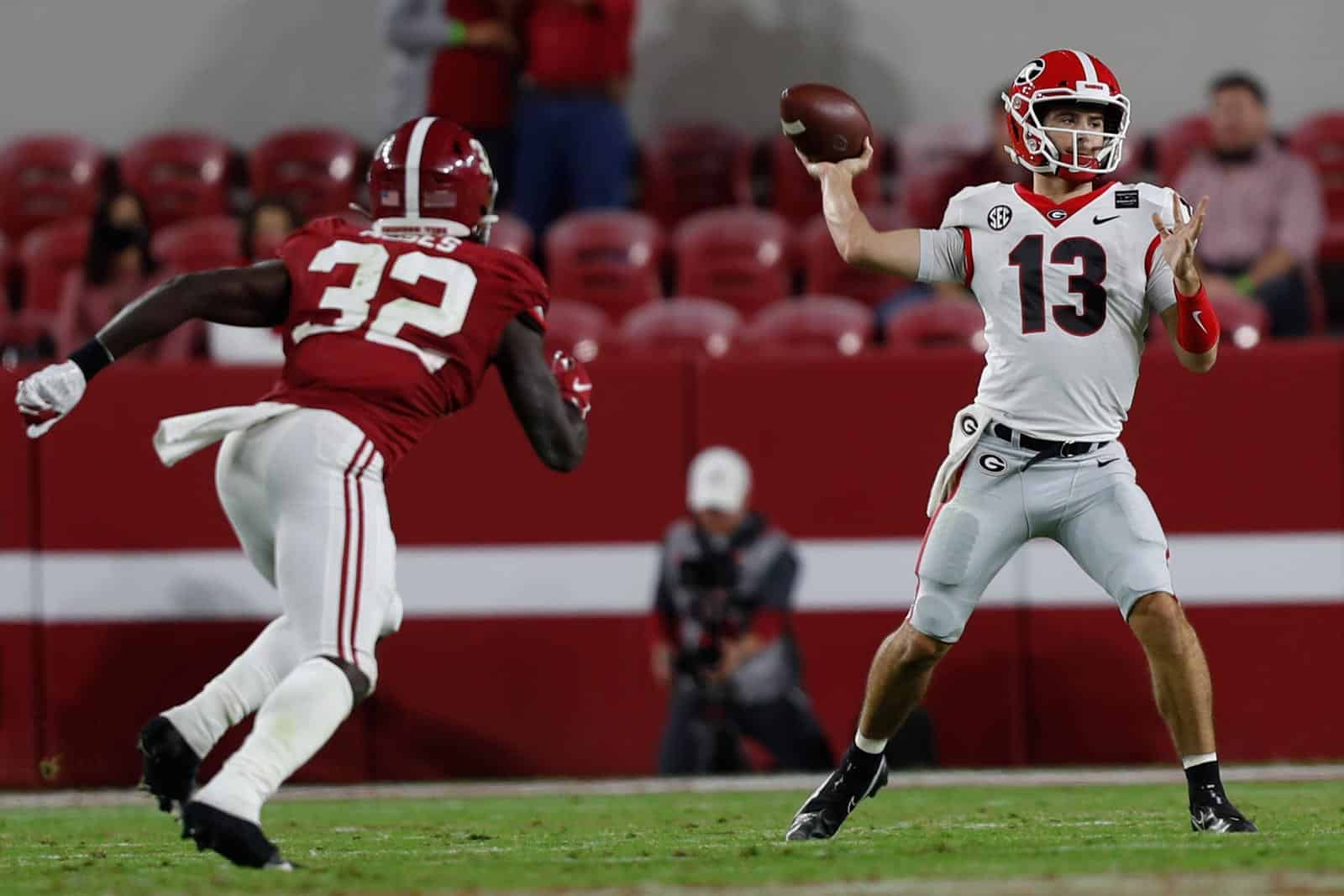 TUSCALOOSA, Ala. – The No. 3 Georgia Bulldogs suffered their first loss of the 2020 season to the No. 2 Alabama Crimson Tide, 41-24 Saturday at Bryant-Denny Stadium in front of a crowd of 19,424 and a national-televised audience on CBS.

“I was really pleased with the way our guys competed,” head coach Kirby Smart said. “Frustrated that we couldn’t get anything going in the second half, especially on that opening drive. I thought we would have been able to run down, but we stalled out and lost some momentum.”

Smart added, “Give them [Alabama] credit. We have to get back to the drawing boards because we still have a really good football team and we control what is in front of us by how we play.”

The Bulldogs (3-1) compiled 414 yards on offense, 269 through the air, and 145 on the ground. The defense forced one interception and sacked Alabama quarterback Mac Jones three times.

Redshirt-junior Stetson Bennett completed 18 passes on 40 attempts, throwing for 2 touchdowns and 3 interceptions. Bennett threw for 177 yards in the first half, the third most by a quarterback in the last four seasons against Alabama behind LSU’s Joe Burrow in 2019 and Clemson’s Trevor Lawrence in 2018.

Sophomore James Cook recorded 117 all-purpose yards, including his first career receiving touchdown on an 82-yard completion. Bennett’s favorite receiving target was sophomore George Pickens, who recorded five receptions for 53-yards. Freshman Jermaine Burton caught four passes for 58-yards and his first career touchdown. Redshirt-sophomore Zamir White led the way on the ground for the Bulldogs, rushing 10 times for 57 yards and one touchdown with a long of 12.

Defensively, the Bulldogs sophomore Lewis Cine led the way with eight total tackles, four solo. While seniors Jermaine Johnson, Malik Herring, and sophomore Nakobe Dean each recorded a sack. Richard LeCounte grabbed his third interception of the season and ninth of his career.

Specialist Jake Camarda punted four times for 196 yards and an average of 49 putting three inside the twenty and hitting two over 50 yards. Jack Podlesny went 1-for-2 in the kicking game, making a 50-yard field goal in the second quarter.

From the first snap, the Bulldogs made their presence known, pressuring Alabama quarterback Mac Jones, allowing LeCounte to secure the interception. On the ensuing possession, Bennett would go on to throw his first interception of the season. The Crimson Tide would take advantage with a 40-yard touchdown pass from Jones to John Metchie to put the Bulldogs down 7-0.

The offense would respond a few drives later, going 57 yards on eight plays, capped off by a 10-yard White touchdown run. Freshman Kendall Milton was integral in setting up the score, rushing for a career-high long of 25-yards. A Podlesny point-after-attempt tied the game a 7-7 with a minute to go in the first quarter.

On the first play of the second quarter, Bennett threw his first touchdown of the game to Cook for 82-yards. It would be the longest play for the Bulldogs since 2013. Podlesny put the extra point right down the middle for the Bulldogs to take their first lead of the game, 14-7.

The Crimson Tide would spend the following 5:49 going 60-yards on 13 plays before being stopped at the 15-yard line thanks to a Johnson sack. Will Reichard hit a 33-yard field goal to put the Crimson Tide within three, 14-10.

A week after hitting his career high with a 51-yard field goal against Tennessee, Podlesny capped a 10 play, 44-yard drive a yard shy of tying that high, making a 50-yard field goal to push the Bulldog lead back to seven, 17-10.

A back and forth first half continued as Jones would tie the game once again at 17 after completing a 17-yard pass to DeVonta Smith with three-minutes to go before halftime.

The Bulldogs would use nearly all three of those minutes, driving 66-yards on 12 plays, including Bennett drawing the Alabama defense offsides on fourth and inches, ending with a five-yard strike to Burton.

With 23-seconds left on the clock, Alabama would drive 41-yards and finish the first half with a career-long 51-yard field goal for Reichard. Georgia would lead the Crimson Tide 24-20 heading into the break set to receive in the second half.

The second half began with great defensive series on both sides, it would not be until the four-minute mark that Jones would find Jaylen Waddle for a 90-yard connection to put Alabama ahead for the first time since the first the score was 7-0. The Bulldogs would go down 27-24 with four minutes to go in the third quarter.

On the next Georgia possession, Bennett would throw his second interception of the night after a ricochet off a Bulldog receiver. Jones would take the Crimson Tide 56-yards in 5 plays finished off by a Najee Harris 2-yard touchdown rush to put the Bulldogs down 34-24.

Another Bulldog turnover led to a 45-yard, 10 play drive by Alabama ending with a 13-yard touchdown reception by Smith to put the Crimson Tide up 41-24, where the score would stay.

Georgia will take their bye week, a week early due to SEC rescheduling before heading to Lexington, Kentucky for a matchup with the Kentucky Wildcats on Saturday, Oct. 31. Kickoff is set for Noon, ET with coverage provided by SEC Network.

Down 7-0, Bennett led an 8-play, 57-yard TD drive in 2:40 capped by a 10-yard rush by Zamir White, his fifth of the year and eighth of career. Bennett connected on an 82-yard TD to James Cook, career-highs for both, and it makred the longest TD pass by the Bulldogs since a school record 98-yarder in 2013 from Aaron Murray to Reggie Davis versus North Texas. Following the PAT, it made it 14-7 Georgia.  With the scored tied at 17, Bennett led a 12 play, 66-yard TD drive in 2:43, converting a 3rd-and-goal to freshman Jermaine Burton with a five-yard TD pass.

*A Look At The Defense:  Coming in, Georgia led the SEC and ranked fifth nationally in Scoring Defense at 12.3 points per game while Alabama led the nation in Scoring Offense at 51.0 points per game. In the first half today, Georgia held No. 2 Alabama to 20 points on 298 yards of total offense on 41 plays. However in the second half, UA scored 21 points including getting 14 off turnovers and finished the game with 564 yards of total offense on 76 plays. UA hit a 90-yard TD pass to Jaylen Waddle for a 27-24 lead with 4:00 left in the 3rd quarter.

*Special Teams Summary Includes NCAA Record For Consecutive PATs: Redshirt sophomore PK Jack Podlesny hit a 50-yard field goal for a 17-10 lead with 5:42 left in the first half, missed a 35-yarder in the 4th quarter, and he was 3-for-3 on PATs.  Georgia now has made an NCAA record 306 consecutive PATs with the streak including six kickers dating back to 2014. Auburn did hold the mark of 304 that ended last year. Podlesny is 8-for-10 in field goals including hitting a pair from 50-plus yards.

Junior punter Jake Camarda finished with four punts for a 49.0 average, placing three inside the 20 and two going for for 50+ yards. He also served as the kickoff specialist tonight for the first time in his career. Coming in tonight, Camarda ranked No. 1 nationally in punting (51.4 avg.) and Net Punting (47.7). UA had just one punt return for 2 yards. Sophomore Zamir White had two kickoff returns for 58 yards. Redshirt sophomore Kearis Jackson had two kickoff returns for 56 yards. White finished with 57 rushing yards on 10 attempts.

*Tonight’s Leading Receivers: Junior running back James Cook established career-highs as he tallied four catches for 101 yards (all in the first half) including an 82-yarder for a TD. Sophomore George Pickens had five for 53 yards. Freshman Jermaine Burton had a five-yard TD, the first of his career, on a 3rd-and-Goal to make it 24-17. He finished with four for 58 yards, both career-high.

*Points Off Turnovers: Georgia got no points on one turnover while UA got 21 points off three Bulldog miscues.

*For Starters:  Senior DT Julian Rochester made his 20th career start but his first since 2018. The longest active starting streak on offense belongs to center Trey Hillnow with 22 while Richard LeCounte leads the defense with 22 straight.

*Captains: Georgia senior Monty Rice, junior Jamaree Salyer and redshirt sophomore Azeez Ojulari served as the captains. The Bulldogs won the toss and elected to defer until the second half.

*Series History And Another Ranked Foe: With the 41-27 victory, No. 2 Alabama now leads the all-time series 41-25-4 including 8-2 edge in Tuscaloosa. Tonight marked No. 3 Georgia’s third straight game facing a top 15 foe after posting wins over No. 7 Auburn and No. 14 Tennessee. Overall, Georgia is 9-5 in Top-10 showdowns in the CKS era.

*Up Next: Georgia (3-1) is now off next Saturday and will face Kentucky, Sat., Oct. 31 in Lexington at Noon, per the SEC’s announced schedule change yesterday.

“Give Alabama a lot of credit. They have great skill players, and I thought we contained them early. The second half we couldn’t do it. Give their coaches credit. They outcoached us. Frustrated we couldn’t get anything going in the second half. We played a really great football team, and we had some costly turnovers. Give them credit, and we have to go back to the drawing board. We still control our own destiny.”

On the breakdowns on defense…

“They made a couple big throws. They beat us on some bubble plays and a double move with Waddle. They made a lot of big plays on 50/50 balls. Smith and Waddle had some big catches.”

On the end of the second quarter and momentum shift…

“I thought it brought their crowd back into it. We didn’t want to give up a big shot to (Jaylen) Waddle, and we didn’t play that aggressive. That is on me, and the official on my side said they had time and they ended up getting a field goal. We should have played more aggressive, but we have to get better.”

On how he saes it for himself and his game….

On what he saw on the interceptions…

“The first one was a batted ball. The second was tipped up. The third one I was trying to do too much and just threw it across my body. It wasn’t smart and I just threw it right to the guy.”

On not scoring in the second half…

“I don’t know. I still feel like we moved it but we just didn’t finish the drives. We are going to have to watch the film and see what happened.”

On the mentality after his third interception…

“I was frustrated. I was frustrated with myself. Mentality didn’t change, we still went down and moved the ball. I just can’t have interceptions like that.”

On the potential to get to play Alabama again…

“Our destiny is still controlled by us, which is how you want it.  If we win out, we will probably see those guys, or somebody else, and we will be in the SEC Championship, so everything we want is still ahead of us.”

On the pass interference call that led to a touchdown…

“Penalties will get you beat.  We have to be better in the secondary. We were able to make some plays, but they made more plays than us.  They have a great wide receiver group, great quarterback, great team.”

On Alabama hitting big plays through the passing game….

“We have to play better as a secondary. We gave up some big plays that they were able to capitalize on.  They have perfect throws, perfect catches and we were playing a great ball club in Alabama.

“We have a great team, man. The team who played better tonight won. It’s not really a demoralizing thing, but we will go back to the drawing board where we are able to fix where we messed up tonight and finish our season out. We’re good. It’s just a little bump in our road. We are here to learn from our experience and get better so they next time we’ll be good.”