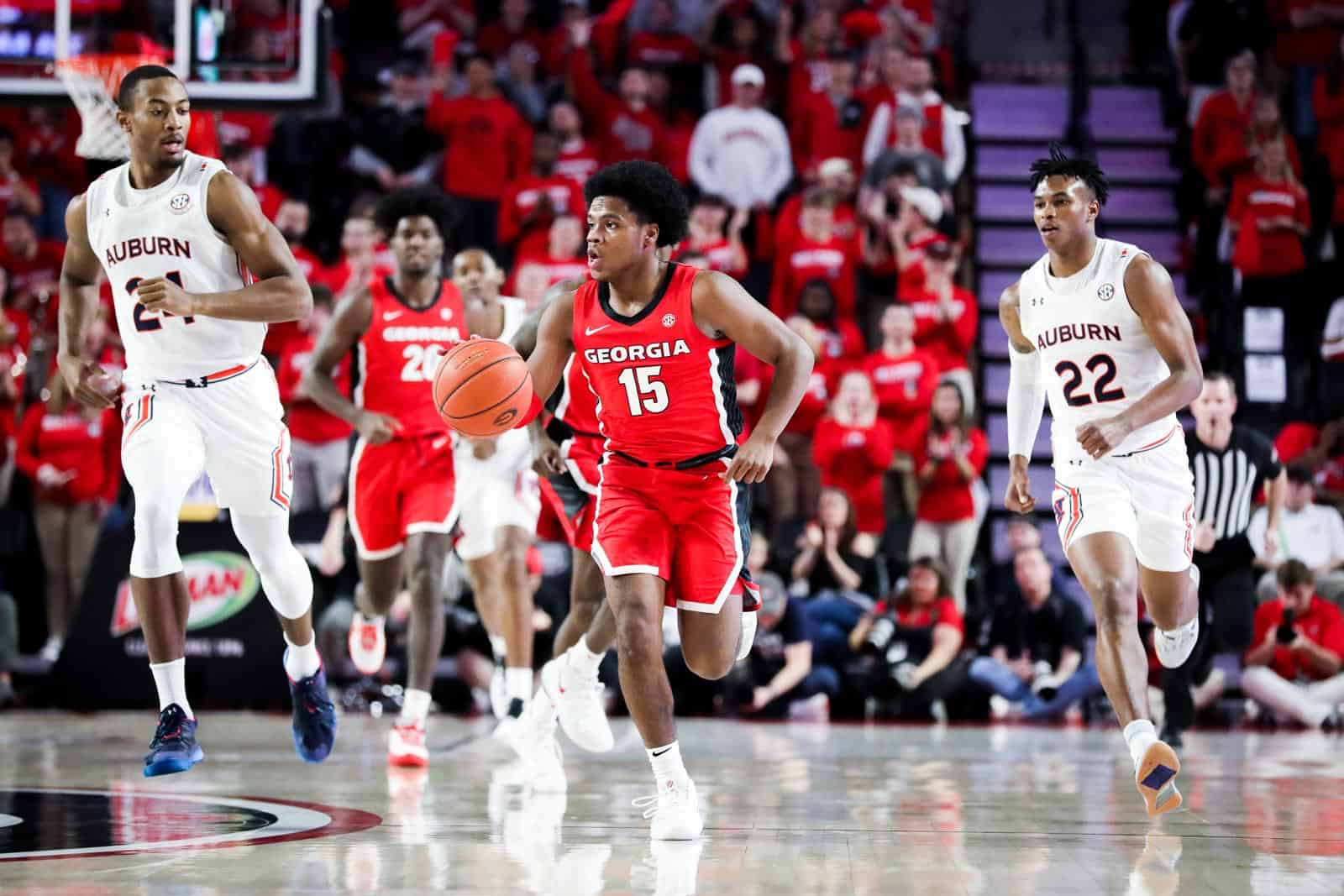 ATHENS, Ga. – The Georgia Bulldogs defeated the 13th-ranked Auburn Tigers in an SEC rematch, 65-55, in front of a sold-out Stegeman Coliseum on Wednesday night to snap a five-game losing streak.

This win marks the first over the Auburn Tigers since March of 2017. It also marks the second win over an AP Top 15 team this season, the last coming at No. 9 Memphis on Jan. 4. The last time the Bulldogs were able to defeat multiple top 15 teams in a season was during the 2003-04 season when they tallied three upsets.

Freshman sensation Anthony Edwards paced Georgia in scoring for the 16th time this season with 18. This marks the 22nd double-digit performance of his career. Junior Rayshaun Hammonds (13) and freshmen Sahvir Wheeler (13) and Toumani Camara (10) joined Edwards in double figures.

Edwards became the third-highest scoring freshman Bulldog of all time after upping his season points total to 486 in tonight’s game with his 18-point performance. Edwards passed Litterial Green’s 481 (1989) and now trails only behind Jumaine Jones (515; 1998) and Jacky Dorsey (646; 1975).

“The fans were here and on their feet,” Georgia Head Coach Tom Crean said. “The win is awesome, there’s no question about it and I’m happy for our team. The bottom line is that shows we’re building a program. We are going through growing pains and hard days. We are going through adversity, but you don’t get a program built if you lose momentum with your fans. They are staying with us, and I’m so thankful for that… To have everybody here like that supporting us on a Wednesday night means a lot. So thank you Dawg Nation, from the bottom of my heart and from all of this team.”

The first five minutes of play saw back-and-forth action between the two teams. Hammonds and Edwards got the Bulldogs rolling, accounting for 15 of Georgia’s first 21 points.

Georgia held Auburn to 2-of-14 from the field en route to grabbing the 22-14 advantage with 7:56 remaining in the opening period.

While Auburn momentarily grabbed its first lead since the opening five minutes, the Bulldogs answered quickly with an 8-0 run to regain the 30-23 lead. The eight point swing was all freshmen, with Wheeler and Edwards accounting for all eight points in Georgia’s run.

The Bulldogs held the Tigers to two points in the final five minutes of the first half to head to the locker room leading 31-25.

Out of the half, Georgia quickly extended to its first double-digit lead, 37-27, due in part to an Auburn scoring drought that lasted 3:16.

A dunk from Edwards marked the first field goal for the Bulldogs in six minutes of play, a pivotal basket to end Auburn’s momentum. Auburn cut its deficit to three, 43-40, halfway through the second frame but the Bulldogs quickly extended their lead back to seven thanks to a jumper from senior Tyree Crump.

Georgia limited Auburn from the field for nearly another three minutes to hold on to the nine-point lead with 6:32 to play. Auburn held Georgia to no points for two and a half minutes before Edwards came up big yet again with a basket in transition to grab the five-point advantage.

A shot from behind the arc from Edwards would grab momentum for the Bulldogs which they wouldn’t lose for the remainder of the game, grabbing the eight-point advantage with 2:15 to play. The Tigers were never able to get within five of the Bulldogs and free throws from freshman Toumani Camara solidified the 62-55 Georgia victory.

• For the first time since the 2003-04 season, Georgia now has multiple wins this season against AP Top-15 teams.

• Four Bulldogs scored in double-digits against the Tigers. Freshman Anthony Edwards paced the Dogs with 18 points, while junior Rayshaun Hammonds and freshman Sahvir Wheeler scored 13 points apiece. Freshman Toumani Camara added another 12 points, including an impressive 10-of12 showing at the free throw line.

• The Bulldogs’ 65-55 victory marks the first win over the Tigers since March 2017. The win also breaks a five-straight lose streak for Georgia.

• Including tonight, Georgia’s overall attendance for home games is 148,700. This trails the all-time UGA attendance record by just 4,653 with two games remaining.

• Both teams finished the game with 45 rebounds each. Georgia won on defense (32-29), while Auburn grabbed more offensive rebounds (16-13).

• The Bulldogs held the Tigers to their second-lowest scoring game against an SEC team so far this season, with Georgia defeating Auburn (65-55).

• Georgia held Auburn to its third-lowest first half score against an SEC opponent this season (25 points). Georgia led 31-25 going into halftime.

On the fans…
“The fans were here and on their feet. The win is awesome, there’s no question about it. I’m happy for our team, but the bottom line is that we’re building a program. We are going through growing pains and hard days. We are going through adversity, but you don’t get a program built if you lose momentum with your fans. They are staying with us, and I’m so thankful for that…To have everybody here like that supporting us on a Wednesday night means an awful lot. Thank you Dawg Nation, from the bottom of my heart and from this team.”

On the game…
“We didn’t win it because of our offense. We won it because we rebounded, defended, and because they had six assists, 15 turnovers, and went four of 26 from [the] three. They got some offensive rebounds. That’s what [Auburn does], but so did we. We’ve been having trouble offensive rebounding in the second half, but tonight we didn’t have that. We made strides; we made improvements.”

On tonight’s game…
“Just glad that the crowd and home base is still sticking with us. A very special shout out to them. They still believe. They still are showing up. They definitely had a presence and an impact on the game. Thank you, Dawg Nation, and keep continuing to support us on that.”

On having the lead and not losing like in the past few games…
“That is just having that experience of the past couple games that we have had when we kind of lost those leads. We came together and were like, ‘Hey, we have been through this a couple times now. We are experienced now. ‘ We have figured out, if we talk when they are on a run, it calms us down and makes us more poised. We make smart decisions and trust each other and that is helping us stick with that lead.”

On how to build off of this win…
“As far as building off of this win, we have to know what we did well. You know, statistically, it was not our best night. We know that. We know why we got the win. We held them to even lower percentages than we had. We fought. We competed every possession. We talked to each other like Coach Crean has been wanting in the past. [We had] that communication [and] everyone stepping up to be a leader. We really did that tonight. If we can do that, I am sure our offense is going to come eventually. We will shoot the ball better, no doubt, [and] then we will be pretty hard to stop. This is a great building point. We are looking forward to Saturday.”

On celebrating with the fans after the win….
“Like you said, we have gotten beat up, but I went to the crowd to tell them that we can win some games, ‘so you all stick and ride with us.’”

On leadership in this game…
“We are all leaders. Everyone on this team is a leader. We all come together and listen and accept criticism if someone needs it. We take it and try to be better. We play like that because Coach Linehan told us that Auburn had the mentality that they were going to beat us in warmups. We just took it upon ourselves, felt disrespected, came out and played hard.”

On Rayshaun Hammonds’ impact in this victory…
“When Ray puts his mind to it, nobody can stop him. I tell him before every game that nobody can guard [him] and to just go out there and play hard. Once he realizes that, no matter who you put in front of him, he can score. He can shoot, dribble, pass, and do all the above. Coach Crean does a great job of putting him in position to score, and I feel like Sahvir (Wheeler) does a good job of getting him the ball.”