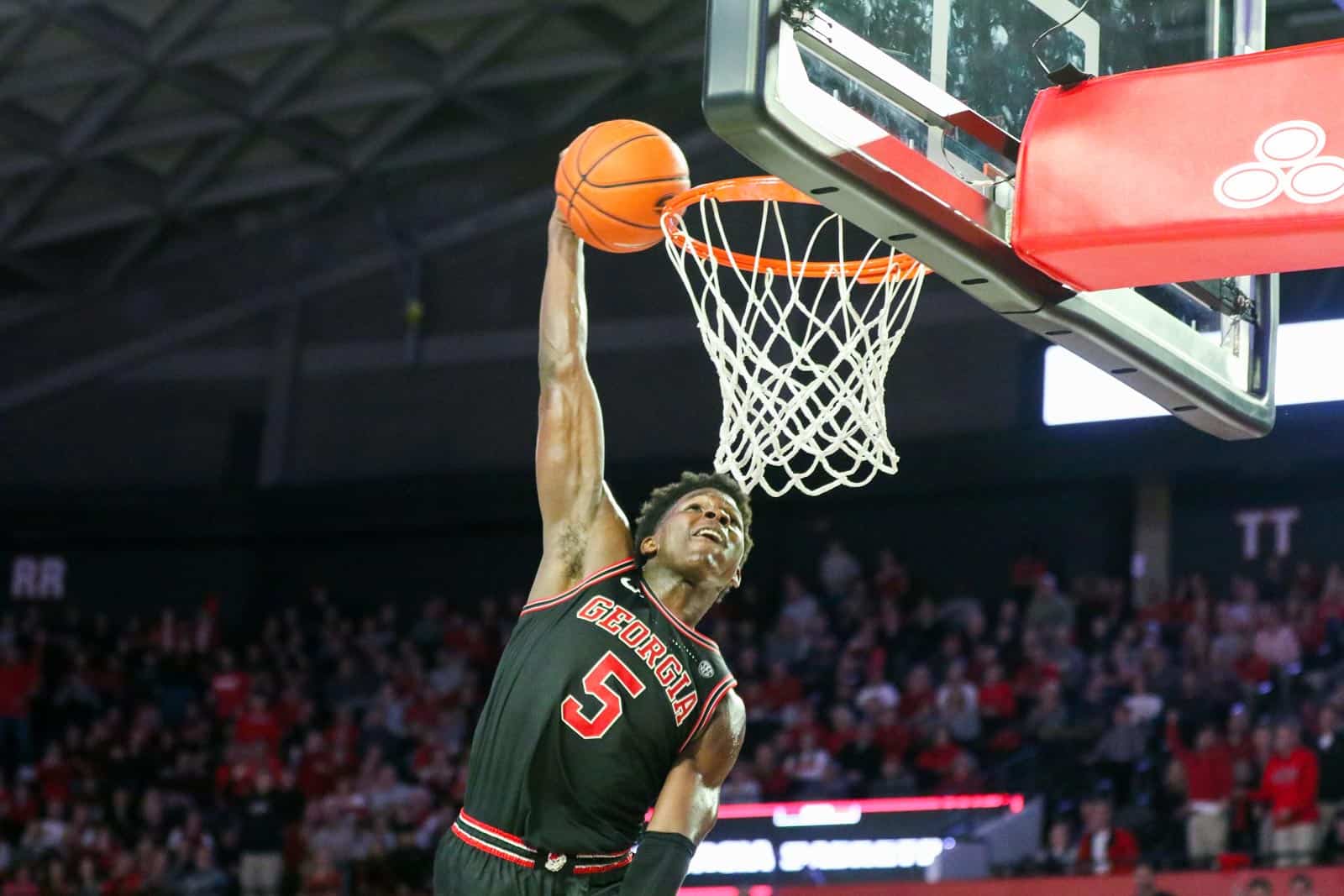 For the second-straight game and the second time in his career, freshman Anthony Edwards recorded a double-double with 29 points and 15 rebounds. The last freshman to complete the feat of recording back-to-back double-doubles was Jumaine Jones during the 1997-98 season. Edwards becomes only the fourth NCAA freshman this season to tally 25 points and 15 rebounds or more in a single game.

Edwards paced Georgia in scoring for the 13th time this season and in rebounding for the second-straight game. This offensive performance marks his 10th 20-point performance on the year and his 15 boards sets a career-high for the freshman. Edwards scoring performance tonight also moves him up two spots to No. 6 in UGA’s Top-10 Freshman scorers, passing D.A Layne and Walter Daniels.

As a team, Georgia had its strongest rebounding performance against an SEC opponent with 43 boards. This is also the largest margin of victory for the Bulldogs in the nine-game series against the Aggies.

“The bottom line is, we had to play really tough to beat Texas A&M,” Georgia Head Coach Tom Crean said. “I tell the guys that it’s not only going to be the toughest, but who’s playing the smartest because of the way they [Texas A&M] defend and draw charges. Outside of our turnovers, I think we did a lot of good things.”

Texas A&M jumped out to an early lead that it held for the opening 10 minutes of play. Senior Tyree Crump tied the game for the first time since the opening minutes, 12-all, with a shot from behind the arc.

Georgia took its first lead of the contest (17-14) thanks to a three-point shot from Edwards with 5:14 to play in the opening half. The closing minutes of the first period saw back-and-forth action from both teams.

Back-to-back Georgia baskets, a layup from Edwards and a buzzer beater from freshman Sahvir Wheeler, sent the Bulldogs into the locker room sporting the three-point lead, 24-21.

Out of the locker room, Edwards and senior Jordan Harris drained back-to-back three-pointers to grab the largest lead for either team up to that point of seven.

Edwards continued his offensive dominance, grabbing the Bulldogs’ first double-digit advantage, 37-27, on his third shot from behind the arc.

Three baskets from Edwards and a jam from junior Rayshaun Hammonds combined for a 9-0 Georgia run to take the twelve-point lead with 13:43 to play.

The Aggies were never able to get back within single digits of the Bulldogs. A free-throw from Wheeler sealed the 63-48 Georgia victory.

Up next, the Bulldogs travel to Gainesville to face the Florida Gators on Wednesday, Feb. 5, at 7 p.m. This matchup will be aired on ESPNU. Georgia returns home next Saturday, Feb. 8, to host the Alabama Crimson Tide at 6 p.m. The sold-out contest will be televised on SEC Network.

• Freshman Anthony Edwards led the team in points and rebounds. He notched his second-straight double-double of his freshman season with 29 points and a career-high 15 rebounds. Edwards is the first Georgia freshman to do this since Jumaine Jones accomplished the feat during the 1997-98 season.

• Edwards is now only the fourth NCAA freshman this season to tally at least 25 points and 15 rebounds in a single game. Edwards finished with his 18th double-digit game of his college career.

• The Bulldogs’ 44 rebounds topped the Aggies’ 34 thanks to impressive finishes at both ends of the court. UGA finished with 29 defensive boards and 15 on offense, while Texas A&M tallied a respective 21 and 13.

• Georgia’s 44 rebounds are the most the Bulldogs have had this season against an SEC opponent.

• Georgia now owns a 5-4 all-time record against Texas A&M. The win snaps a four-game loss streak for the Bulldogs against the Aggies.

• Their 63-48 victory over the Aggies marks the most points the Bulldogs have scored against Texas A&M in all nine contests.

• Out of the Bulldogs’ five wins in the series, today’s 63-48 final score represents Georgia’s largest margin.

On the game…
“The bottom line is, we had to play really tough to beat Texas A&M. I tell the guys that it’s not only going to be the toughest, but who’s playing the smartest because of the way they defend and draw charges. Outside of our turnovers, I think we did a lot of good things.”

On freshman forward Mike Peake…
“Momentum is always up for grabs. That play by Mike Peake [ended] up being a momentum-changing play with eight seconds to go in the half. We [got] the timeout, which we [hadn’t used]. We set our action up, and Shavir Wheeler [got] a layup. Momentum changed… We’ve got to continue to understand what wins. The guys now understand when you compete, have great practices, and put it together, you’re going to have a chance on the court.”

On taking control during the game…
“In practice, we do a lot of boxing out drills. I told the bigs to box out number 32 on [Texas A&M]. I told them to box him out, and I would go and get the rebound. I took it upon myself to go down there and try to grab every rebound I could.”

On what worked for Georgia today that did not work in the previous game against Missouri…
“What worked for us in the second half, that didn’t work for us in the Missouri game, was Sahvir Wheeler. That is all I can say. The rebounds and points came from him. I appreciate my other teammates, too, for being happy and looking for me every time. Sahvir is the key to it all. When he plays, we all play up to his intensity.”

On looking forward…
“I feel like we could compete with anyone. If we put our mind to it, don’t think too much, go out there and play basketball, and just do what the coaches tell us to do, we can compete with anyone, no matter who it is.”

On what led to cutting back turnovers in the second half…
“I think it was settling down. We came back after halftime and got some momentum towards the end of the half to calm the nerves down. Then, we just had to trust each other. The ball was moving a little in the first half, and we really got moving in the second half. We got Anthony [Edwards] and Rayshaun [Hammonds] some free shots. We started moving the ball in transition. We are a great team in transition, so as long as they are getting one shot, we are passing ahead. Our turnovers are down, and we were making plays at the other end of the floor.”

On handling the double-digit lead in the second half of today’s game coming off the loss to Missouri…
“The past is the past. We cannot change it, but we can definitely learn from it. That is not something we dwelled on. We just had the same situation. Looking back on it, we just had to finish out the game. It is a 40-minute game, and we had the lead with 12 minutes to go, which is a long time. We just came out and had to believe, stick to the game plan and keep our foot on the gas.”