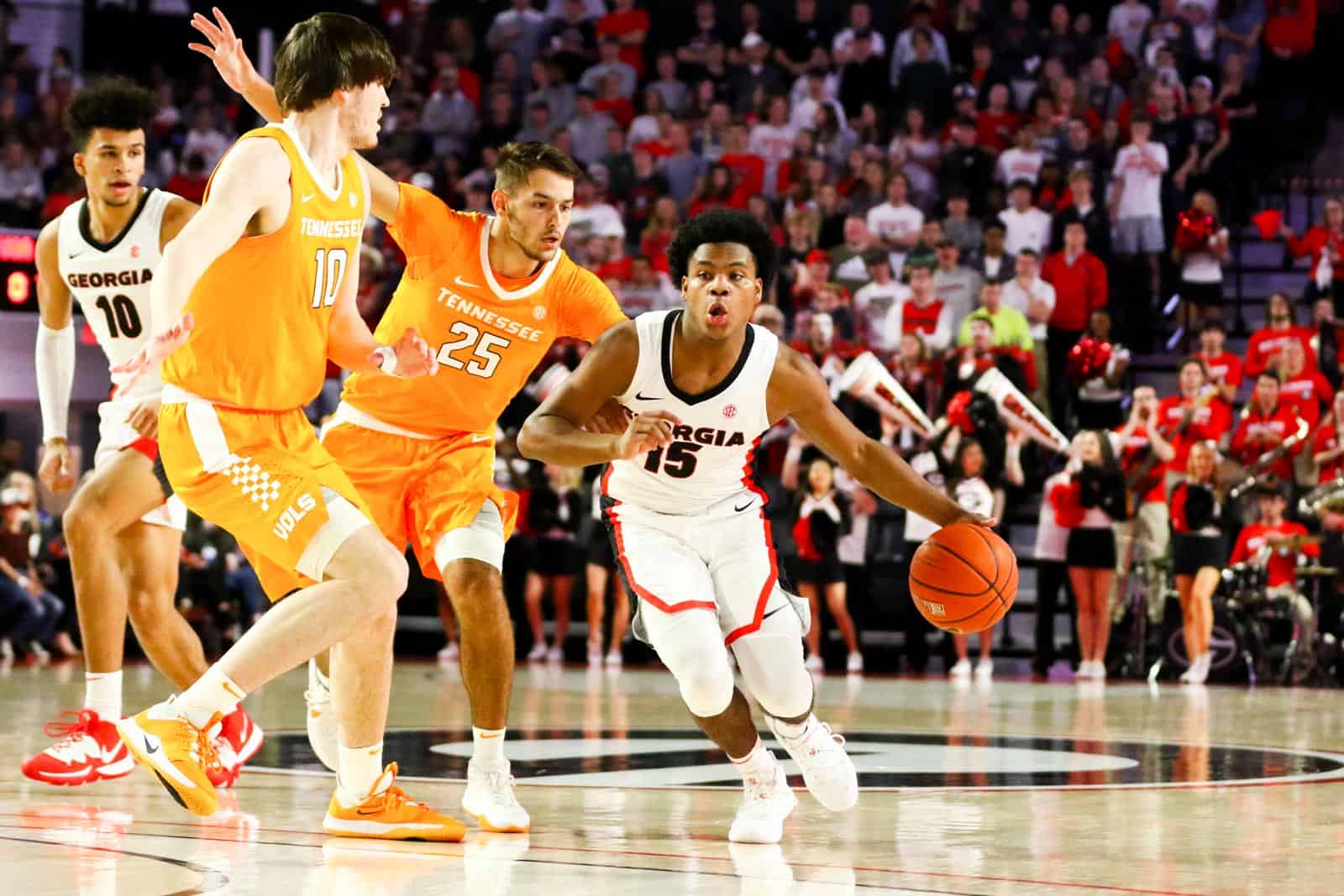 ATHENS, Ga. – The Georgia Bulldogs dominated the Tennessee Volunteers, posting an 80-63 victory before a crowd of 10,313 on Wednesday night in Stegeman Coliseum.

The Bulldogs had two players tally 20-plus points. Freshman Anthony Edwards paced all scorers with 26 points and junior Rayshaun Hammonds tacked on another 21. That marked the first time Georgia had two players surpass 20 points since Hammonds and Nicolas Claxton did so against Illinois State last season.

Behind those two impact performances, Georgia defeated Tennessee by 17, Georgia’s largest margin of victory in the last 10 matchups between the two programs. The 80 points scored is also the most scored by the Bulldogs on the Volunteers since 2016 and the most scored on Tennessee this season.

Georgia outperformed Tennessee in 10 categories, including a victory in the rebounding battle. Led by graduate transfer Donnell Gresham Jr. who tallied seven rebounds, Georgia edged Tennessee on the boards 37-34.

Georgia’s successful first half was due large in part to the efficient 3-point performance. While the Bulldogs entered the game averaged 6.9 3-pointers per game, Georgia went 8-for-13 from behind the arc in the opening 20 minutes of play. This also marks the highest first-half three-point percentage on the season. The Bulldogs shot over 50 percent from all three areas in the opening half to score 40 or more points for only the fourth time this season and the first since Dec. 4.

“Our offense made our defense better,” Georgia Head Coach Tom Crean said. “You always want it to be that way, that’s always a lot better. The defense was able to sustain things. We challenged shots better, we got our hands up better, our switching was better, and we were able to win the glass. We have to play that way. Our team has to learn to understand that even on the road, if we’re not making layups, or we’re not getting fouled, or not making free throws and jumpers, if we let our defense continue to do the job, we’re going to be fine.”

Georgia jumped out to an early 8-3 lead thanks to baskets from three different Bulldogs. Tennessee took its first lead after five minutes of regulation as the result of a 9-0 run and a 3:34 Bulldogs scoring drought.

A shot by Edwards from behind the arc sparked an 8-0 run in under a minute. This allowed the Bulldogs to regain the four-point lead, 16-12.

The Bulldogs continued to extend their advantage, grabbing their first double-digit lead of 10 (29-19) with a little over eight minutes remaining in the opening period. Hammonds drained back-to-back three-point shots to give Georgia the 13-point lead. Out of a media timeout, senior Jordan Harris capped a 10-0 Bulldogs’ run with a jam on the fast break to go ahead 34-19.

Back-to-back baskets from Edwards propelled Georgia to its first 20-plus point advantage, 47-25, with just over a minute remaining. Edwards notched 20 points in the first 20 minutes.

Tennessee hit a three-point shot on their final possession to send Georgia into the locker room sporting the 47-28 lead.

After almost seven minutes of play in the second half, the Bulldogs matched their largest lead of the game, 22, thanks to back-to-back baskets from Hammonds. Shortly after, Georgia grabbed its largest advantage of the contest up to that point, 23 (63-40), off free-throws from Harris.

Continuing his dominance, a contested three-point shot from Edwards extended the Bulldogs’ lead to 26, the largest of the game, with 2:41 remaining.

While Tennessee was able to cut its deficit under 20 in the closing minutes, the Bulldogs defeated the Volunteers, 80-63.

Up next, Georgia travels to Starkville to face the Mississippi State Bulldogs on Saturday, Jan. 18, at 8:30 p.m. The matchup will be televised on SEC Network. The Bulldogs return to a sold-out Stegeman Coliseum Saturday, Jan. 25 to host the Ole Miss Rebels at 5:30 p.m.

• Georgia’s 80 total points in tonight’s game are the most scored by any team against Tennessee this season. It also marks the most points the Bulldogs have scored against the Volunteers since 2016 (81).

• Two Bulldogs tallied 20 or more points, a feat which has not happened since last season against Illinois State when Rayshaun Hammonds (31) and Nicolas Claxton (22) did so.

• Anthony Edwards was Georgia’s leading scorer with 26 points – his 8th 20-point game of the season –while Hammonds finished with 21.

• Tonight’s win lifts Georgia to a 7-1 record when leading at the half this season. The Bulldogs led, 47-28, against Tennessee heading into halftime.

• Georgia was 76 percent from the free throw line, marking the team’s best free throw performance at home this season. Tonight was the sixth game this season the Bulldogs have shot 70 percent or above at the line.

• Georgia had a season-best first half from the three-point line, going 61.5 percent (8-of-13) behind the arc. Before tonight, the Bulldogs’ had only shot 50 percent from the three in two other contests.

• Also in the first half, Georgia was 53.1 percent from the field. This is the third-best first-half shooting percentage from the field this season.

• The Bulldogs are now 8-2 when outrebounding their opponent. They are also 4-0 when playing on Wednesday this season.

On the Georgia defense…
“Our offense made our defense better. You always want it to be that way, and that’s always a lot better. The defense was able to sustain things. We challenged shots better, we got our hands up better, our switching was better, and we were able to win the glass. We have to play that way. Our team has to learn to understand that even on the road – if we’re not making layups, or we’re not getting fouled, or not making free throws and jumpers, if we let our defense continue to do the job – we’re going to be fine.”

On the Georgia offense…
“I thought Anthony Edwards had one of his best ‘attack’ games. All of the sudden, when you’re in the attack mode, you’re making threes. I think that’s a big part of it. I thought the ball movement, reversals, the four or five passes were huge for us, and I thought they made a huge difference. I thought Rayshaun Hammonds did an outstanding job. I thought our guys did a good job of finding him. Again, the ball just continued to move, and that’s a huge thing for us. We had three turnovers in the final minute, or we would’ve had only seven turnovers, which would’ve been a nice thing.”

On Tennessee…
“Tennessee is one of the tougher teams in our league. The reason they’ve won all these years is because they’re that tough, and they just ‘out-tough’ people. We were going to have to match and overcome that and be tougher tonight to win the game. We had to do that, and we have to learn to do that more often. Obviously, it’s a huge win.”

On the changes from last week to now…
“We got some stuff done in practice, just playing hard. The main focus was playing defense. We are not worried about offense. We are giving up a lot of point,s so we have had to focus on the defense. We are focusing on trying to stop the other team.”

On last season’s game against Tennessee compared to tonight’s game…
“The Tennessee game last year was the worst loss ever in my life. [Tonight], I just wanted to get a win. No matter what, I just wanted to get that win. The main focus was playing hard defense, scoring if I could and getting my teammates involved. That was the main focus [tonight].”

On getting in foul trouble at the beginning of the game…
“I just had to stay cool. I stayed to myself. I stayed focused and let the game come to me. I couldn’t go out there and get another crazy foul. I was just playing my game.”

On what was your role in the second half…
“I felt like I did what I had to do in the first half, we got a lead so now I was going to try and create for my teammates and see what I can do with the ball and dishing it to them (my teammates). The plan was dishing the ball to Rayshaun because he was in foul trouble in the first half and I knew what he wanted to do. Also, getting Tyree Crump, Christian Brown, and Jordan Harris the ball.”

On the Georgia crowd’s engagement…
“I love the crowd and fans. I appreciate every time they come out and support. They are always great and loud. Every time I get a chance, I try to celebrate with them.”

On your first conference win…
“To get on a winning streak , we have to win one game at a time. We have to go on the road to get another one. Tyree Crump gave us a big speech at halftime telling us how badly we got beat last year by these guys and how we couldn’t let them come here and beat us. We took that and ran with it.”