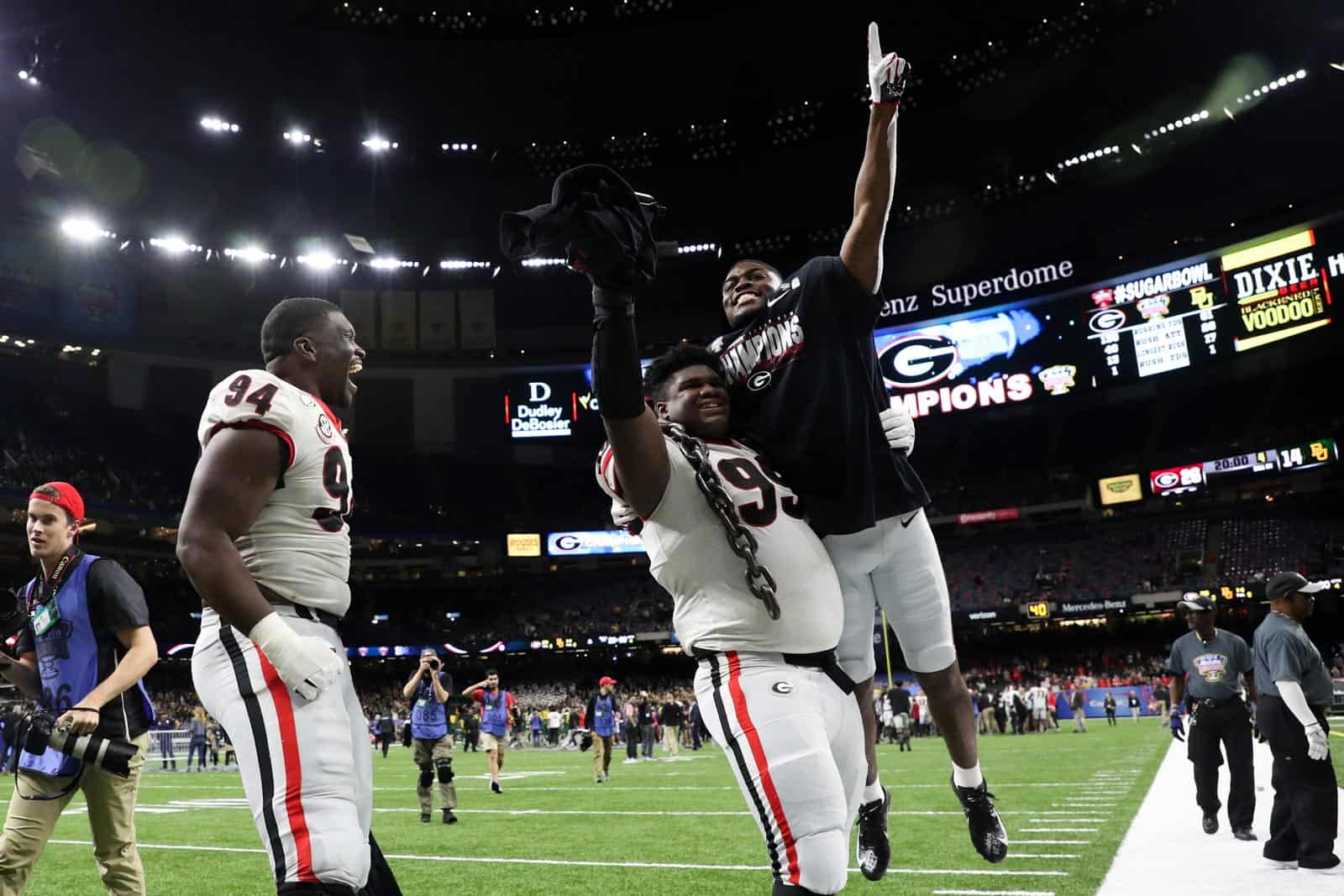 NEW ORLEANS – Powered by stout defense and a career game from freshman wide receiver George Pickens, the fifth-ranked Georgia Bulldogs (12-2, 7-1 SEC) closed the 2019 season with a 26-14 victory over the seventh-ranked Baylor Bears (11-3, 8-1 Big 12) in the 86th Allstate Sugar Bowl Wednesday evening before 55,211 spectators at the Mercedes-Benz Superdome and an ESPN primetime television audience.

Georgia’s victory improved its overall bowl record to 32-21-3, including its fifth victory in the Sugar Bowl. Additionally, the Bulldogs’ senior class tied the mark for most wins by a class with 44, matching the record set by the 2005 class.

Junior quarterback Jake Fromm led the Georgia offense, finishing 20-for-30 with 250 yards and two touchdowns. Pickens, named the Sugar Bowl Most Outstanding Player, tallied 12 catches for 175 yards and a touchdown, with 165 of those coming in the first half. On the ground, redshirt freshman tailback Zamir White amassed 92 yards rushing on 18 carries. For the evening, the Bulldogs offense posted 380 yards and finished 4-for-4 in the red zone.

With his performance, Pickens became the first Bulldog receiver with at least 10 catches since Isaiah McKenzie against Missouri in 2016, while his 175 yards were the most since Tavarres King notched 188 against Kentucky in 2012.

On the defensive front, junior cornerback DJ Daniel led with eight tackles, followed by freshman safety Lewis Cine with six. Junior safety Richard LeCounte added to his team lead with two interceptions, finishing with four for the season. The Bulldogs defense allowed 295 yards with six tackles for loss, in addition to stopping each of Baylor’s three fourth-down attempts.

Following a pair of Georgia punts to begin the game, the Bulldogs defense posted the game’s first highlight as LeCounte grabbed a deflected Baylor pass at the Georgia 18-yard line with one hand for his first interception of the game. Later in the quarter, a 40-yard flea flicker from Fromm to Pickens led to the evening’s first points as senior place kicker Rodrigo Blankenship connected from 24 yards out.

On Georgia’s next possession, Fromm efficiently moved the offense on an 8-play, 85-yard scoring drive, capped off by a 27-yard strike to Pickens at the 12:28 mark of the second quarter. After a Bears punt, the Bulldogs once again reached the red zone, capitalizing with a 31-yard Blankenship field goal, the final of his illustrious career.

Nearing the end of the half, Fromm tacked on another score as he found redshirt sophomore wide receiver Matt Landers for his first career touchdown on a 16-yard pass, followed by a failed two-point conversion attempt to set the halftime score at 19-0. The first half shutout was the fifth by the Georgia defense this season.

In the third quarter, Baylor came out energized as three catches from wide receiver Denzel Mims helped put the Bears on the scoreboard with a 12-yard touchdown, following up a 40-yard completion by Mims earlier in the 8-play, 75-yard drive.

The Bears crossed into Georgia territory on their ensuing drive, but on fourth down, redshirt freshman linebacker Azeez Ojulari forced a fumble by quarterback Charlie Brewer that was recovered by freshman defensive lineman Travon Walker at the Baylor 47-yard line. Along with his forced fumble, Ojulari finished with five tackles and one sack.

Setting up with excellent field position, the Bulldogs initially stalled at the Baylor 30-yard line, but a fake field goal allowed sophomore punter Jake Camarda to convert on fourth down with a 6-yard run. On the next play, White found the pylon for a 13-yard touchdown, increasing the margin to 26-7 Georgia at the 7:16 mark of the third quarter.

On the following drive, Baylor turned to junior running back Trestan Ebner, whose 42 yards and recovery of a goal line fumble helped the Bears cap off another 8-play, 75-yard drive with a 1-yard Brewer touchdown run. After a Georgia 3-and-out, Baylor once again crossed midfield to close the third quarter before electing to punt and strand the Bulldogs at their 1-yard line. Despite reaching Baylor territory, a third-down sack forced Georgia to punt.

With the clock running down for Baylor, an injury to Brewer forced the Bears to enter freshman backup Jacob Zeno, but he was unable to convert on 4th-and-11 with five minutes remaining. On Baylor’s final possession, LeCounte notched his second pick, allowing Georgia to kneel out the clock.

Georgia will next take the field on Monday, September 7 for a matchup against Virginia in the Chick-fil-A Kickoff Game at Mercedes-Benz Stadium in Atlanta.

*Strong Effort By The Defense: Fifth-ranked Georgia held #7 Baylor to a season low 14 points in a 26-14 victory tonight. Georgia blanked the Bears in the first half, holding them to 97 yards of total offense (22-pass, 75-pass). Coming in tonight, the Bears were averaging 35.2 points a game and 431.2 yards a game. It was the fifth time this year that Georgia blanked an opponent in the first half and the first time since the road win over Auburn. The last first half shutout in a bowl game by the Bulldogs was against Alabama in the 2018 CFP National Championship game when it led 13-0. The Bears finished with 295 yards of offense. Baylor opened the second half with an eight play, 75-yard scoring drive to cut it to 19-7. On their possession, the Bears went for it on 4th down and 4 from the UGA 46 and Charlie Brewer was sacked and fumbled as it was forced by RS-freshman Azeez Ojulari and recovered by Travon Walker.  It led to a touchdown and a 26-7 Bulldog lead. The Bears second TD came on another eight play, 75-yard drive with 4:10 left in the 3rd quarter to cut it to 26-14. Georgia’s leading tacklers tonight were DJ Daniel with a career-high eight while Ojulari and Lewis Cine had six. Ojulari finished with five stops, one sack and one forced fumble.

Georgia held 13 of its 14 opponents under 20 points this season.Before the 2019 SEC Championship Game, Georgia and Clemson were the only two teams in the FBS not to allow more than 20 points in a game. In the SEC Championship Game, top-ranked LSU registered a 37-10 win over the Bulldogs as the Tigers came in ranked second nationally in Scoring Offense (48.7 ppg). In the CFP semifinal, Clemson beat #2 Ohio State 29-23.

*A Look At The Offense:Junior QB Jake Fromm finished 20-for-30 for 250 yards and two TDs to lead the Bulldogs to a 26-14 win over No. 7 Baylor, their 12th of the year. Georgia’s first scoring drive that resulted in a 24-yard field goal was setup by a flea-flicker as Fromm handed off to junior D’Andre Swift who tossed it back to Fromm, and it went for a 46-yard completion to George Pickens. The Bulldogs tallied 380 yards of total offense (130-rush, 250 pass). The leading rusher was redshirt freshman Zamir ​White who had 92 yards on 18 carries, both career highs in his first start.

*Bowl Record Night For Pickens: Freshman George Pickens, who was named the Sugar Bowl Most Outstanding Player, registered a career-high 12 catches (tying a UGA bowl record) for 175 yards and 1 TD and that was most receptions by a Bulldog since Michael Johnson had 13 versus Auburn in 2002 for 141 yards. In the first half, Pickens had 11 for 165 yards and one TD. Pickens’ 175 yards was the most by a Bulldog in a game since 2012 when Tavarres King had 188 versus Kentucky. Pickens’ team-leading eighth TD catch, the most by a true freshman in the country, covered 27 yards with 12:28 left in the half for a 10-0 edge. Pickens previous career bests came versus South Carolina when he had seven catches for 98 yards. Pickens shares Georgia’s bowl record for catches with Hines Ward (154 yards in the 1998 Outback Bowl win over Wisconsin) Also, redshirt sophomore Matt Landers got his first career TD, a 16-yarder to make it 19-0 with 1:51 left in the first half. He had three catches for 25 yards.

*Another Win Over Top 10 Foe: With tonight’s win, Kirby Smart improved to 7-4 against top 10 teams during his tenure including 3-1 this season.  His overall mark is 44-12 in this is fourth year at the helm.

*Blankenship Tallies 8 Points: Graduate PK Rodrigo Blankenship finished with 8 points (2-FGs, 2-PAT) to give him 127 for this year (ranks 3rd best in single season at UGA) and already a school record 440 for his career. He made a 24-yarder for a 3-0 edge with 49 seconds left in the 1st quarter and then a 31-yarder for a 13-0 lead with 8:08 left in the first half.  He already owns the school record for career points and ranks second in SEC history. In the first half, he finished 2-for-2 in field goals. He is now 27-for-33 on the season in field goals. Also of note, he set the SEC record for consecutive PATs made on his first PAT tonight and added one more as he now has 200.

*Points off Turnovers:Georgia forced three turnovers and it led to seven points. The first one was an interception by junior Richard LeCounte. He returned it to the UGA 26. It did not lead to any points. In the 3rd quarter, Azeez Ojulari had a strip sack and it was recovered by Travon Walker. It led to a TD. LeCounte notched his second pick late in the 4th quarter to tie a Georgia bowl record and allow the Bulldogs to go into the victory formation. LeCounte has five picks for his career and four this year. The Bears came in tonight +14 in turnover margin this year while Georgia was even.