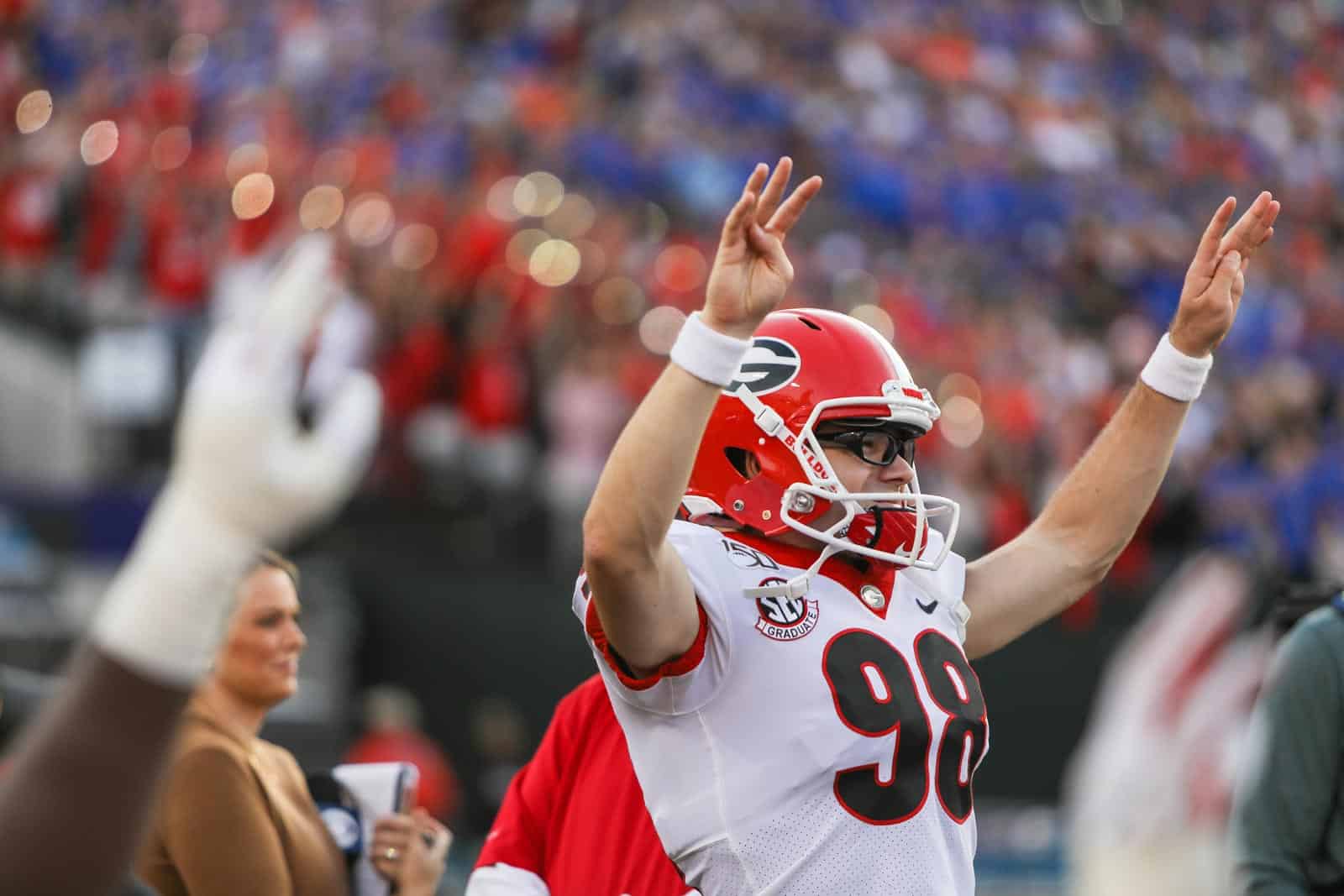 With Blankenship’s selection, Georgia now has a Southeastern Conference-leading 14 NFF post-graduate scholars. In fact, the Bulldogs rank sixth nationally in the category with their first kicker being honored since Robert Etter in 1966.

Blankenship is the only SEC recipient this year and the first for the league, which has had a total of 72 all-time, since 2016. Each of the players who received the 2019 Scholar-Athlete Award will be awarded an $18,000 postgraduate scholarship.

Blankenship is the only special teams player on this year’s squad. The 2019 CoSIDA First Team Academic All-American and 2018 Allstate American Football Coaches Association (AFCA) Good Works Team member is the first Bulldog to garner the Scholar-Athlete Award since quarterback Aaron Murray received the honor in 2013.

This marks only the second time in school history that Georgia has had an NFF Scholar Athlete as well as an Allstate AFCA Good Works Team member (junior quarterback Jake Fromm) in the same year. In 2011, punter Drew Butler won a Scholar-Athlete Award while tight end Aron White was on the Good Works Team.

Honors had already begun to roll in for Blankenship this season. The six-time 2019 SEC Special Teams Player of the Week was named the SEC Scholar-Athlete of the Year for football this season. He was also a finalist for the Burlsworth Trophy and Lou Groza Award and a semifinalist for Wuerffel Trophy.

Blankenship, a native of Marietta, Ga., is the SEC’s second leading scorer this year, averaging 9.2 points per game, and has connected on 25-of-31 field goal attempts and all 198 of his career PATs, including 44 this year. He has drilled three 50-yard field goals during his team’s 11-2 mark. Blankenship is the FBS active leader by 16 with a total of 78 made field goals. He is UGA’s all-time leading scorer with 432 points, which ranks second all-time in league history.

The former walk-on’s school record 198 consecutive PATs ranks second in SEC history. Thanks in large part to his contribution, Georgia leads the nation with 289 PATs in a row dating back to 2014.

Blankenship’s journey has included kicking a game winner at Kentucky in 2016 as a redshirt freshman walk-on and drilling a 30-yarder to clinch the victory at No. 24 Notre Dame in 2017 before announcing to his teammates postgame that he had earned a scholarship.

Two of his more memorable moments in uniform were setting a Rose Bowl Game record with a 55-yard field goal during the double-overtime win over No. 2 Oklahoma in the College Football Playoff Semifinal and hitting a 51-yarder in overtime of the National Championship Game one week later versus No. 4 Alabama.

Georgia’s 19th Allstate AFCA Good Works Team member since 1992 has been just as stellar in the community. He is a member of the UGA Athletic Association’s Leadership Academy (L.E.A.D.) and has given his time to the following activities and many more: spokesperson for “No More,” which is a public service announcement against domestic violence and sexual assault; visitation at Camp Sunshine, which is a camp that provides support programs for children with cancer and their families; volunteer for the “Empty Bowl” luncheon, which is a luncheon sponsored by the Food Bank of Northeast Georgia where hand-painted ceramic bowls done by the football players were part of a silent auction to raise funds for needy families; and volunteer for the Home Runs for Hometown Rivals, which is a softball game at UGA’s Foley Field for Special Olympians.

The NFF’s National Scholar-Athlete program, launched in 1959, is the first initiative in history to award scholar-athletes postgraduate scholarships for their combined athletic, academic and leadership abilities. This year’s class members finds themselves in good company with past National Scholar-Athletes who include former Bulldog All-American and past chairman of Augusta National Golf Club, home of the Masters Tournament, Billy Payne.