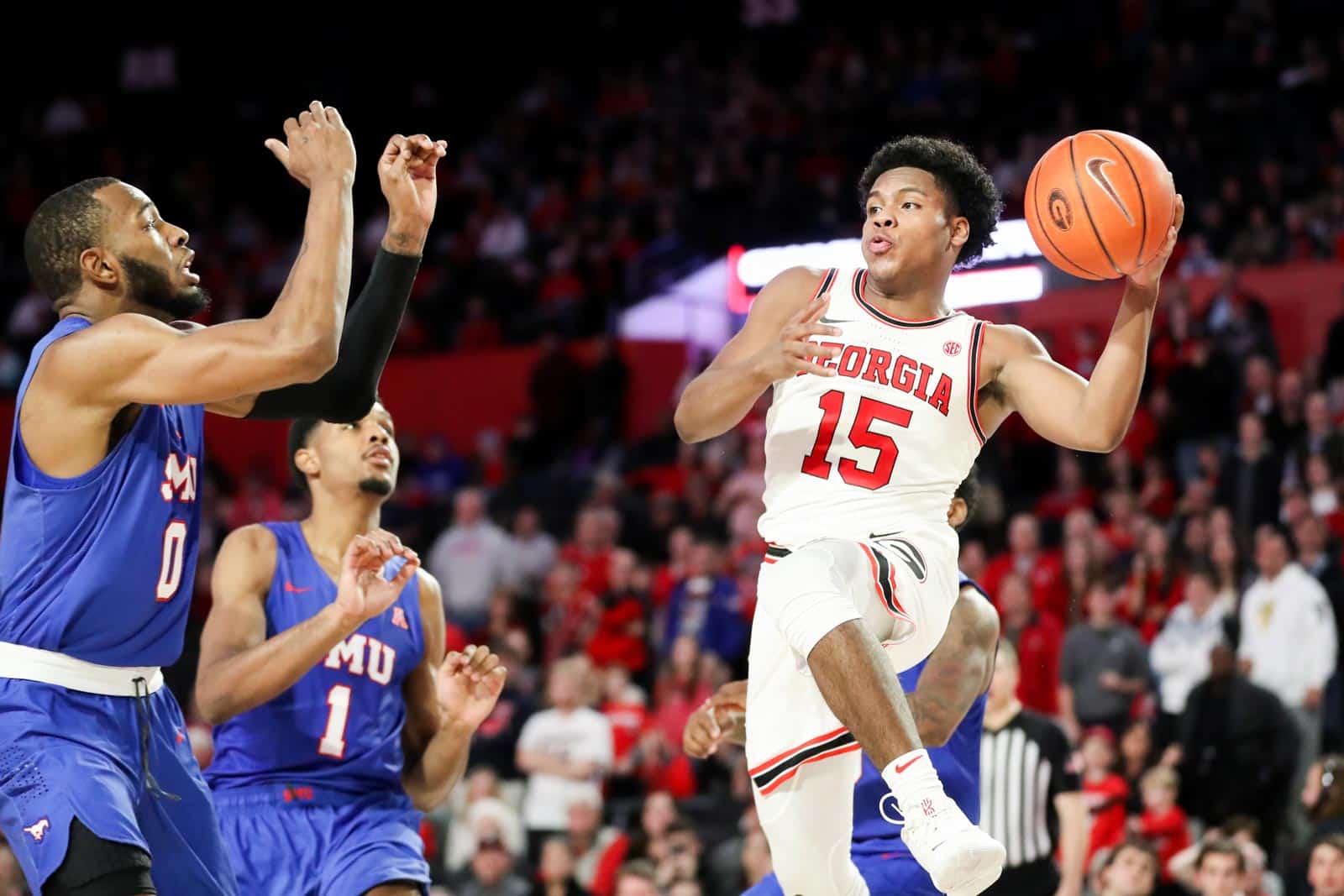 ATHENS, Ga. – Sahvir Wheeler, a freshman from Houston, Texas, scored on a driving layup with 1.9 seconds left in the second overtime to propel the Georgia Bulldogs to an 87-85 win over the Southern Methodist University Mustangs on Friday night in Stegeman Coliseum.

Wheeler drove from the top of the key through two SMU defender on the left side of the lane before banking in the game-winner. Wheeler also scored with 24 seconds remaining in the first overtime to push the contest another five minutes.

Junior Rayshaun Hammonds paced Georgia in both scoring and rebounds, tallying 21 and 11 respectively to record the fifth double-double of his career and third of the season. Two other Bulldogs ended the night in double-figures, including freshman sensation Anthony Edwards (16) and senior Tyree Crump (12). Behind Hammonds, freshman Toumani Camara grabbed a career-high six boards. Wheeler equaled his career high with eight assists to go along with nine points.

Comparing the two teams, the Bulldogs shot a higher percentage in all three categories. Georgia also out performed SMU in second-chance points, 22-19, proving to play a key role in the victory.

“We don’t win this game without this crowd,” Head Coach Tom Crean said. “We do not win this game without this incredible, passionate, stick-with-us, not let us drop crowd. I reminded the players a few times that we’re sitting here in basically a sold-out game, and these fans are not giving up on you, so don’t give up on yourself. I’m extremely proud of how we found a way to win, and I’m unbelievably thankful for our fans.”

While the Bulldogs got on the board first, SMU led by a small margin for the opening five minutes. A basket from Edwards propelled Georgia to a one-point lead with 15:23 to play. The basket was part of a 7-0 Georgia run that extended the lead to 12-8 with 13:10 to play.

After knotting the game twice, SMU regained the lead, 24-21, with 4:21 to play on an and-one as part of a 6-0 run. The Mustangs extended their run to 8-0 to grab their largest advantage to that point at five.

Two consecutive baskets from senior Jordan Harris, including a dunk at the buzzer, brought the Bulldogs within three to send them into the locker room trailing, 28-25.

Seven minutes into the second half, Harris came in clutch yet again with a 3-point shot to bring Georgia within one, 44-43, after facing its largest deficit of six out of the locker room. Shortly after, graduate transfer Donnell Gresham Jr. drained a second-chance basket to gain the 45-44 Georgia lead.

A shot from behind the arc from Hammonds powered Georgia to its largest lead of the night, five, with 3:26 left in regulation. The Mustangs were able to regain the 68-67 lead off a fast-break layup with two minutes remaining.

After knotting the game at 68-all thanks to a free-throw from Hammonds, the Bulldogs were able to force the game into overtime after Edwards denied SMU a shot with one-second remaining. After both teams committed turnovers while inbounding the ball, the half-court shot from Edwards missed to send the game into overtime.

The Mustangs quickly grabbed the first points of overtime off a 3-pointer. While SMU held onto the lead for a majority of the first overtime, the Bulldogs tied the game at 77 with 24 seconds remaining thanks to a layup from Wheeler to force another five minutes of play.

Double-overtime mimicked the majority of regulation with a back-and-forth battle between the two teams, including multiple ties and lead changes. Two-made free-throws from Edwards put Georgia on top within seconds of double-overtime. Edwards continued his dominance shortly after, draining a shot from behind the arc as the shot clock expired to put Georgia ahead by three. SMU answered with a 3-pointer of its own to tie the game yet again at 82-all with 2:31 remaining, only for Hammonds to counter with a three-point shot while being fouled to push the Bulldogs ahead by three.

The game was knotted 85-all with 1:23 remaining, but the layup yet again from Wheeler sealed the 87-85 double-overtime victory for the Bulldogs.

Up next, Georgia hosts in-state foe Georgia Southern on Monday, Dec. 23, at 7 p.m. for the final game before the break for Christmas. The matchup will be televised on SEC Network.

• In the first-ever contest between the two programs, Georgia defeated SMU in double overtime. Points from nine-of-11 Bulldogs who played in the contest lifted Georgia to a 87-85 victory.

• Senior Rayshaun Hammonds notched his third double-double of the season and the fifth of his career after totaling 21 points and 11 rebounds against the Mustangs. It is also Hammonds’ career-fifth 20-plus point game.

• Hammonds doubled his scoring total in the last 30 minutes of the game with 15 points after scoring six in the first half.

• Freshman Sahvir Wheeler led Georgia in assists for the eighth game this season. He tied his career-high of eight. He also leads the team in overall assists this season with 49 thus far.

• Freshman Toumani Camara grabbed a career-high six rebounds in his first start of the 2019-20 season. He was the team’s second-leading rebounder of the night.

• In his first game of the 2019-20 season, senior Jordan Harris finished with nine points.

• In the second half, Georgia doubled its points off turnovers, improving from four points in the first half to eight in the second.

• Despite not seeing the free throw line in the first frame, the Bulldogs were 9-of-12 from the line in the second half to finish the game 75.0 percent in free throws.

• In their first overtime game of the season, the Bulldogs improved to 8-13 in double-overtime games in UGA history.

On the crowd…
“We [wouldn’t have] won this game without this crowd. We would not have won this game without this incredible, passionate, stick-with-us, won’t-let-us-drop crowd. I reminded the players a few times that we’re sitting here in basically a sold-out game, and ‘these fans are not giving up on you, so don’t give up on yourself.’ I’m extremely proud of how we found a way to win, and I’m unbelievably thankful for our fans.”

On some of the players…
“I thought Rayshaun [Hammonds] rebounded well. I thought Tyree [Crump], for a guy who didn’t play a lot in the second half, [played well] and [came] in and [banged] that 3-pointer. Toumani [Camara]’s 37 minutes – oh my goodness. He plays so hard, but the statistics don’t match up yet with how hard he plays. When the statistics match up with how hard he plays, then we have a really good player. Toumani was out there a ton and did good things. It was great to have Jordan Harris back, too.”

On what a win like this does for a team…
“It builds confidence. That’s all I can say. It builds confidence, grows out the younger guys, makes it easier for them to play in bigger games now, they know what they’re doing. You don’t have to talk to them, you don’t have to tell them anything, they already know. It’s fun doing that and it’s fun for me to see them do that so it’s cool.”

On how big the win is…
“It’s big. It’s going to take it a long way. That’s all that matters is getting a win and going on with the season.”

On what it means to get Jordan Harris back…
“It’s big. A lot of games I’ve played with Jordan and he’s always been a spark no matter what. Even if it’s not going his way on defense, he’s still going to be a problem. It’s a blessing. It’s a real blessing so we’re happy to have him back.”

On if the game winning shot was designed more for him…
“Yeah, the second one was more of a designed play. Two ball screens at the top, and try to find a way to win and fortunately enough, that happened today.”

On what it means to him that his team and coaches have enough confidence to make that play…
“That’s an everybody thing. We all have confidence in each other. Just think about how Jordan Harris came into this game. He hadn’t played a game in forever and the confidence we have in him. He came over and made a big spark, made a three ball in transition, made a couple of dunks, couple of deflections, he was super active. Rayshaun [Hammonds] did a great job in the paint. We all chipped in, we all have confidence in each other, we all love each other, we all see the extra work and time in, that’s what happens at the end of games. We believe in each other.”

On how this last second shot compares to his others…
“This one takes the top obviously. The college level, it was in the Steg, a place that is second to none, you got to love the fans, got to love the situation. As a player, a competitor you don’t necessarily want to be in these tight games but you love that, you love that chance to win the game and go out strong.”