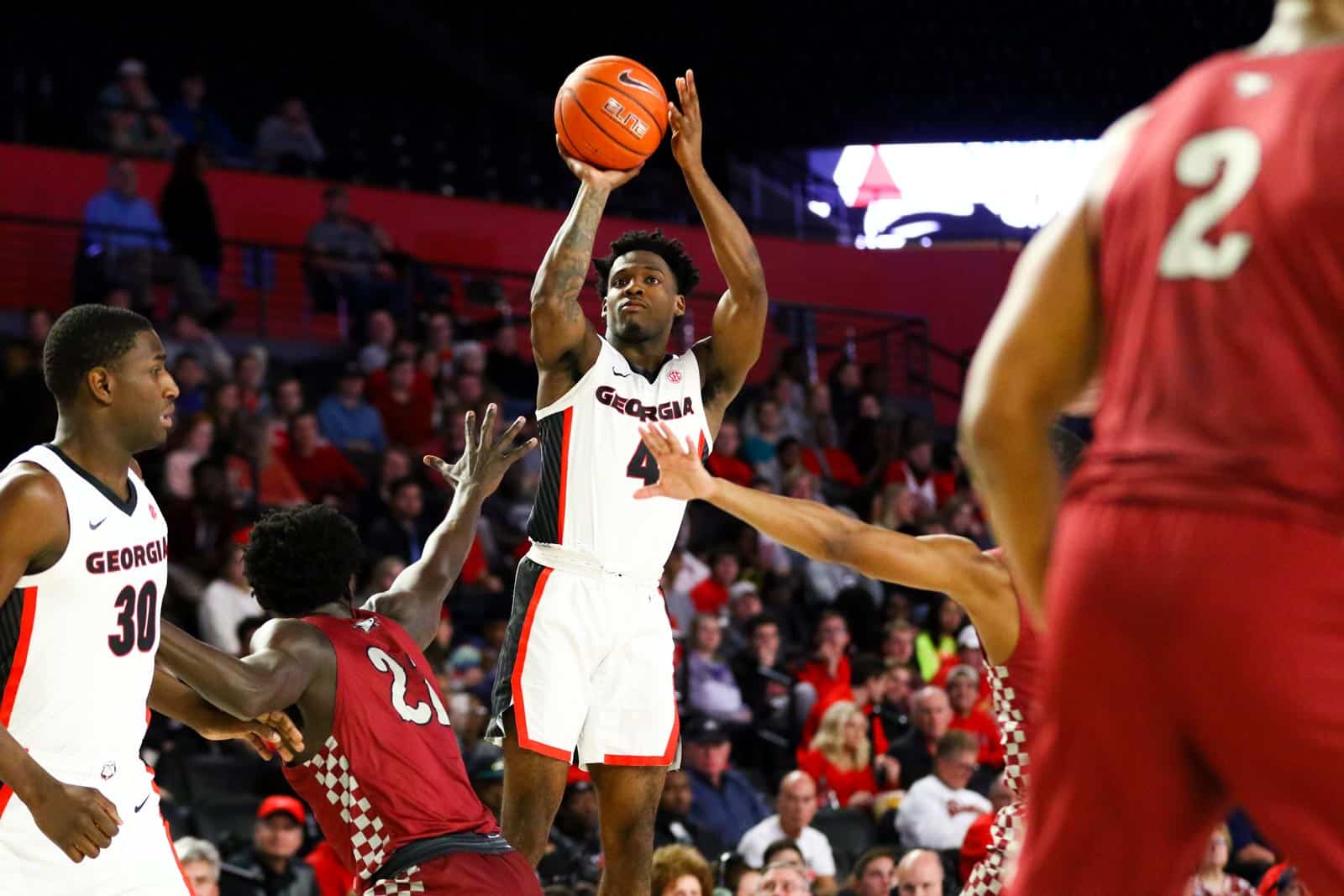 Four Bulldogs recorded double-digit points in the win. Freshman Anthony Edwards led the way with 21, recording his fifth-game of the season to score more than 20 points but his first to shoot at least 50 percent from the field. Other Bulldogs in double-digit scoring included Junior Rayshaun Hammonds (19), senior Tyree Crump (16) and freshman Christian Brown (11). This marks Brown’s first-career double-figure game and career-high points scored.

Crump, making four three-pointers, moved up in the Georgia record book for most three-pointers in a career. His 145 three-pointers surpassed former Bulldogs Ty Wilson (1992-95) and Ray Harrison (1996-99) to climb to No. 12.

As a team, the Bulldogs grabbed 22 offensive rebounds, marking a season high. Georgia also won the rebounding battle, 54-25, with Hammonds’ nine boards leading the way. This was the fourth 90-plus scoring game for the Bulldogs, tying the number of games Georgia accomplished that feat last season.

“I thought our defense tonight, especially in the second half, became a lot better,” Georgia Head Coach Tom Crean said. “We held them to 24 percent shooting in the second half and 9 percent from three. I love the fact that we had three stops in a row 11 different times in the game. We had 47 deflections, we doubled them in rebounding, and we also had some good shots that did not go in.”

Though Georgia led for most of the opening period, North Carolina Central hung within one for the majority of the first five minutes of play. Back-to-back baskets from Edwards, including a fast-break jam, extended the Bulldogs lead to five, 14-9, with 13 minutes to play.

Georgia continued to increase its advantage, going on an 13-0 run over 3:09, capped with a three-pointer from Edwards, to gain its first double-digit lead of the night, 21-9. The Bulldogs eventually totaled a 16-3 run in under five minutes.

The Eagles cut Georgia’s deficit to single digits, nine points, only one time in the final 10 minutes of the opening half. The Bulldogs led by as many as 18, thanks to a 13-3 run over 2:31, capped by three-straight three’s, including two from Crump and one from Edwards.

Five-straight points from Edwards, who tallied 19 points in the first half alone, powered Georgia to its first 20-point lead of the night, 46-25, with 2:55 remaining. The Bulldogs entered the locker room leading the Eagles, 50-35.

Out of the locker room, Georgia went on an 11-0 run over three minutes, with scores from three different Bulldogs, to hand North Carolina Central what was then its largest deficit of the game (26).

The Eagles were never able to cut the deficit below 30 points and the Bulldogs led by as many as 37. A free-throw from freshman Mike Peake sealed the 95-59 Georgia victory.

The Bulldogs will now enter a 10-day stretch with no games before they travel to Arizona State on Saturday, Dec. 14, to play the Sun Devils at 8 p.m. ET, 6 p.m. MST. The matchup will be televised on The PAC-12 Network.

• Georgia totaled 95 total points against NC Central, making it the fourth game this season the Bulldogs have scored 90-plus points. The last time Georgia had four or more 90-plus-point games was in the 2006-07 season.

• Freshman Christian Brown was the fourth Bulldog to score in double-digits. He scored a career-high of 11 points.

• This marks the second game of the 2019-20 season that Georgia has recorded 50 or more points in the first half alone.

• Georgia had its highest first-half free throw shooting performance of the season, going 83.3 percent from the line. The Bulldogs recorded their second-best night at the line, finishing 75 percent in free throws.

• Freshman Rodney Howard led Georgia in blocks with his career-high four blocks. Howard also saw the first start of his career in tonight’s game against the Eagles.

• The Bulldogs’ nine 3-pointers are the second-most in a single game this season.

• Edwards shot over 50 percent for the first time this season, knocking down 8-15 from the field. Fifth game with 20 or more points.

On the game…
“I thought our defense tonight, especially in the second half, became a lot better. We held them to 24 percent shooting in the second half and nine percent from three. I love the fact that we had three stops in a row, 11 different times in the game. We had 47 deflections. We doubled them in rebounding, and we also had some good shots that did not go in.”

On the team…
“Hammonds is averaging nine rebounds a game. He’s got to have an identity, and rebounding is carving out an identity for himself. Anthony Edwards and Donnell Gresham are also rebounding the ball very well for us, as guards. Rodney Howard also had four offensive rebounds. The starting lineup tonight does not mean it will be the starting lineup next week against Arizona State. There could be a lot of different ways we play. I not only want to get eight or nine starters, but I really want to have 10 or 11 finishers, because that’s a good position to be in. We’re not there yet, but we’ll get there.”

On the swing of momentum with offensive rebounds…
“It is big. That is something we work on in practice, and it is one of the top things we work on. We work on rebounds to keep the possession alive. When we do that, it is kind of hard to guard us. That is the main thing.”

On keeping foot on the gas in the second half…
“A team like [NC Central] can easily make runs. They are a pretty good team and always make it to the (NCAA) Tournament. When you have a team like that, loaded with experience, you have to keep your foot on it, because they can get back in the game.”

On attacking the NC Central zone…
“We moved around a lot tonight. That was the game plan- to move out the slots, and cut out the corners to free everything up. We hit Rayshaun [Hammonds] in the middle (of the zone) and fed off of him for the first seven minutes of the game, and it freed everything up.”

On getting back into scoring rhythm after being held scoreless against Dayton…
“I am not perfect, and I am going to have those types of games. When you are not hitting shots, and things are not going well, it becomes about what you can do to help your teammates be successful. That is what I was focused on.”