Bulldogs pull away from Volunteers, 43-14

Bulldogs pull away from Volunteers, 43-14 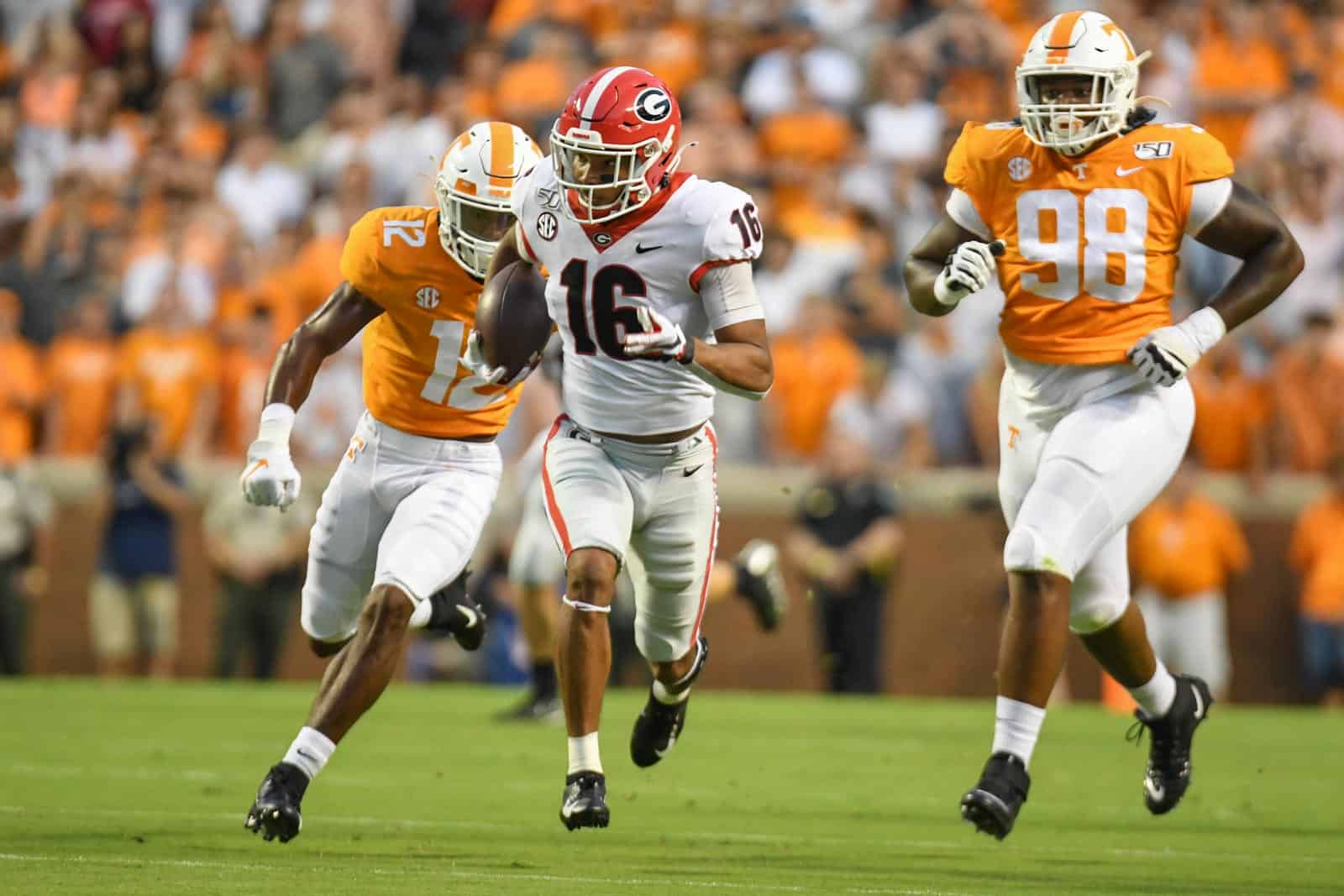 KNOXVILLE, Tenn. – The third-ranked Georgia Bulldogs used 33 unanswered points to run away from Tennessee in a 43-14 victory in front of 92,709 fans at Neyland Stadium and an ESPN nationally-televised audience on Saturday evening.

Junior quarterback Jake Fromm turned in an outstanding performance, going 24-of-29 for 288 yards and two touchdowns. Senior tailback Brian Herrien led a balanced rushing attack with 11 carries for 88 yards with junior D’Andre Swift adding in 76 yards on 17 rushes. Swift led in receiving yards for the fifth time in his career with 72 yards, gaining 148 all-purpose yards. Overall, the offense amassed 526 yards for the game with an average of 7.5 yards per play.

The Bulldog defense only allowed 104 yards from the Volunteers in the second half, with 70 of those coming on their final drive of the game. Junior safety Richard LeCounte and junior defensive back Mark Webb tied for the team lead with five tackles, while redshirt freshman linebacker Azeez Ojulari tallied two sacks.

“We knew they would come ready to play. They had a week off and they have a good football team,” said head coach Kirby Smart. “They came out and played physical, and so did we…Our kids came back and played hard. They came out in the second half and played a lot harder.”

After forcing Tennessee to punt on its opening possession, Georgia took nearly seven minutes off the clock with a methodical 12-play, 84-yard scoring drive that concluded with a 1-yard touchdown run from Swift. The sequence was highlighted by a 28-yard completion to junior wide receiver Demetris Robertson on 1st-and-20, moving the Bulldogs into Volunteer territory. Swift’s score also marked the fourth time this season that Georgia has scored on its first offensive drive.

Tennessee then quickly responded with a 73-yard touchdown strike from freshman quarterback Brian Maurer to senior wide receiver Marquez Callaway, knotting the score at 7 apiece. Maurer’s first career touchdown was the longest play allowed by the Georgia defense this season.

On the next Georgia possession, Fromm and the offense once again used major plays to break into Tennessee territory, including a 44-yard pass to Swift and a 25-yard completion to graduate wide receiver Lawrence Cager. The momentum was slowed by the Volunteer defense, leading to a 50-yard field goal from senior place kicker Rodrigo Blankenship, his fifth career kick from beyond 50 yards and second this season (50 yards at Vanderbilt at Aug. 31). Blankenship remained perfect on the season with three field goals and four made PATs, extending Georgia’s team streak to 270 consecutive makes.

For the second consecutive possession, Tennessee responded to a Georgia score, efficiently moving down the field before Maurer found redshirt senior wide receiver Jauan Jennings for a 12-yard touchdown on the opening play of the second quarter, giving the Volunteers a 14-10 lead. Despite a career-long 40-yard run by Herrien, the Bulldogs would again settle for a 34-yard Blankenship field goal, capping off an 8-play, 58-yard drive.

Following three consecutive stalled drives from both teams, the Bulldogs set up at their own 40-yard line with four minutes remaining in the half. Georgia would take advantage of the field position with a 6-play, 60-yard drive that concluded with a 3-yard touchdown pass from Fromm to Cager. Looking to answer, Tennessee moved down the field in a two-minute drill, but came away empty when kicker Brent Cimaglia missed from 47 yards out.

Utilizing an extra possession to end the half, Georgia padded its lead with a 7-yard touchdown catch from freshman wide receiver George Pickens in the back of the end zone with nine seconds remaining to enter the locker room with a 26-14 lead. The 5-play, 70-yard drive only took 50 seconds and was bolstered by 42 yards from Swift.

After fruitless drives from both teams to start the half, Georgia added to its tally on its second possession as Blankenship notched his third field goal of the night, a 27-yard try that completed a 7-play, 43-yard drive. On the next drive, the Volunteers reached midfield, but a deep throw from Maurer was intercepted by LeCounte at the Georgia 22-yard line.

The Bulldogs were unable to capitalize on the turnover as Swift was stopped on 4th-and-1 at the Tennessee 39-yard line. Following a Tennessee punt, Georgia steadily moved down the field on a game-sealing 10-play, 75-yard drive that ended with a 1-yard Herrien touchdown run.

The Bulldogs added another score with senior linebacker Tae Crowder’s 60-yard fumble recovery touchdown, resulting from a Maurer fumble on a blind side sack by redshirt sophomore cornerback Eric Stokes. On Tennessee’s final drive, the Volunteers were set up with 1st-and-goal at the 5-yard line, but a Bulldog goal line stand preserved the second half shutout.

“We took a punch there in the gut with the bomb, but they responded well,” said Smart. “They kept fighting and kept playing hard, created some turnovers in the second half.”

Next Saturday, Georgia returns to Athens for its first SEC home game of the season, a matchup against South Carolina (2-3, 1-2 SEC) at noon on ESPN.

*Bulldogs Win, Take Series Lead, Extend Streak Versus SEC East: With Georgia’s 43-14 victory, the Bulldogs now lead the all-time series 24-23-2 as it dates back to 1899. It marks the first time they broke a tie to take a series lead over UT since 1981 when it went up 9-8-2. Also, the Bulldogs now have won 15 straight games over teams from the SEC’s Eastern Division dating back to 2016.

*Swift & Herrien Lead Rushing Attack: Georgia tallied 159 yards on the ground in the first half and finished the game with 241 yards on 39 attempts (6.2 avg.). Junior D’Andre Swift has a team-high 17 carries for 72 yards and a TD. Senior Brian Herrien finished with 11 carries for 88 yards and a TD. Herrien had a career-long 40-yard rush in the 2nd quarter.

*Points off Turnovers: Junior DB Richard LeCounte notched his 1stinterception of the year and second of his career. Georgia took over at the UGA 22, and it led to no points. In the fourth quarter, sophomore DB Eric Stokes delivered a sack and fumble and senior Tae Crowder scooped it up for a 60-yard fumble recovery for a TD. The Bulldogs are now +4 in turnover margin and have scored 23 points off eight turnovers. It marked the 12thscore by either the defense or special teams in the Kirby Smart era. Earlier this year, graduate J.R. Reed had a 14-yard fumble recovery for a TD against Murray State. LeCounte had a  team-high five tackles along with junior Mark Webb.

*For Starters: JuniorJustin Shaffer made his first career start for the injured Solomon Kindley, getting the nod at left guard. Junior QB Jake Fromm started his 33rdstraight to lead the offense while graduate J.R. Reed(S) now leads the defense with 34. Junior DJ Daniel made his second straight start at RC while junior Walter Grant made his first of the year at LB and ninth of his career.  Sophomore N Jordan Davis left the game in the first series due to an ankle injury.